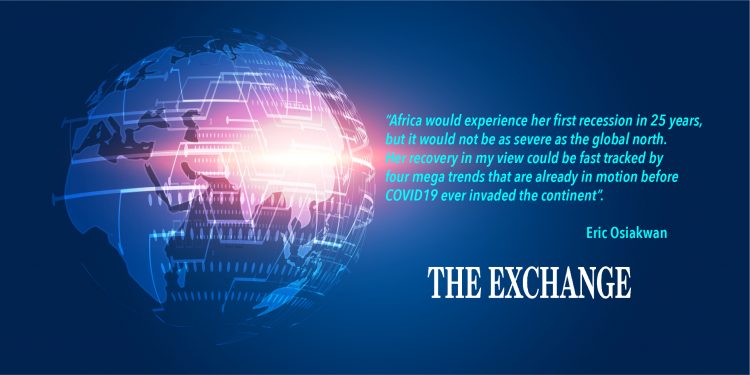 4 Trends in Africa Overcoming the global pandemic - The Exchange

Africa’s four MEGA TRENDS that are overcoming the global pandemic

Africa has arguably leapfrogged the west in terms of telecom infrastructure. Just a generation ago, starting a business in Africa was not the “in” thing, but we are now in the midst of a paradigm shift - it is cool to be a tech entrepreneur. This is the result of the world’s youngest population expressing itself through the availability of mobile web technology.

by Opinion
in Industry and Trade, Opinion
0
Share on FacebookShare on LinkedIn

Africa appears to have narrowly escaped the level of devastation that COVID19 is wreaking in the global north with China as its entry.[1] As if the virus followed the global supply chain to destroy it.[2] The global supply chain links China to the global north before connecting to Africa[3] so by the time the virus got here African leaders shut the borders – that is the saving grace despite the doom’s day prophecies of Bill Gates.[4] Africa got it right this time around without the help of the western saviors which begs George Ayittey’s famous quote “Africa is poor because she is not free”.[5]

According to the IMF[6] and WorldBank[7], Africa would experience her first recession in 25 years, but it would not be as severe as the global north.[8] Her recovery in my view could be fast-tracked by four mega trends that are already in motion before COVID19 ever invaded the continent. The first of these trends has actually gained speed on the back of the virus – digitization. With the lockdowns in Africa many went online (in my previous post I alluded to how we are seeing this in our portfolio companies[9]). Virtualized services are doing very well, while mobility businesses are struggling to keep up. Semi-mobilized businesses that qualify as essential services like food and grocery delivery are going strong. The World Economic Forum has said “Diverse sourcing and digitization will be the key to building stronger, smarter supply chains and ensuring a lasting recovery.[10]

Digital innovative ventures that are software-based (and, in some cases hardware-based) businesses leveraging mobile web technology to solve pain points, fix bottlenecks and address market gaps that make financial returns and, in some cases, impact. The huge investment in telecom infrastructure like submarine and terrestrial fiber cables, satellite stations and mobile/wireless networks all over the continent, has enabled the leveraging of these new technologies.[11] The private sector has predominantly led these investments, while in some cases, public private partnerships (PPPs) have charted the course.

These innovations are permeating all sectors of the economy like financial services, education, agriculture, health and energy creating “new” sectors like Fintech, Edtech, Agtech, Healthtech and Cleantech just to mention a few which make up the digital economy.

For a long time, Africa has arguably leapfrogged the west in terms of telecom infrastructure. Building on this, we can leapfrog our counterparts abroad in terms of business models that make both fiscal and impact returns.[12] Hubtel is an example of such a business that is profitable. Africa’s digitizing economy can make real the concept of People, Planet and Profit rising together interdependently. Below is a picture of global tech giants who have visited Africa because of the digital innovation – before the lockdown began, Jack Dorsey of Twitter said he planned to come live in Africa for three months in 2020.[13]

These entrepreneurial ventures arise out of Africa’s youthful brain trust.  Just a generation ago, starting a business in Africa was not the “in” thing, but we are now in the midst of a paradigm shift – it is cool to be a tech entrepreneur. This is the result of the world’s youngest population expressing itself through the availability of mobile web technology. Most of these young entrepreneurs believe in themselves and their ability to create the next Facebook or Google out of Africa. They argue that if Mark Zuckerberg and Bill Gates can do it without college degrees, they are no less. This phenomenon of self-discovery, identification with web technology and expression through entrepreneurship is powering the digital renaissance that is changing the narrative led by the youth population of Africa.

Almost 60% of Africa’s population in 2019 is under the age of 25, making Africa the world’s youngest continent. According to the UN’s demographic projections, the median age in Africa is going to be 19.8 in 2020.[14] And Africa’s population is going to double by 2050.[15] The Mo Ibrahim Foundation titled their 2019 report “Africa’s first challenge in this regard is the youth bulge currently stuck in ‘waithood’. I come from the school of thought that while some are waiting, the others are busy building entrepreneurial ventures. In my view that is the only way out because those ventures would in turn hire the rest of the youth who are not entrepreneurial. Therefore, African policy-makers need to wake up to the realization that they must create an environment that cultivates more entrepreneurial ventures. That would in turn solve the unemployment predicament we have on the continent. The way to solve unemployment is to enable new businesses that would scale by employing more hands.

The common market came into effect last year when the 54 African states signed the protocol after many years of discussion – this could not be more timely.[16] The IMF estimate puts the common market in Africa at four trillion dollars[17], so this is a big enough market for these entrepreneurial ventures according to the WEF.[18] The first generation of these ventures have started scaling into multiple markets so are already leveraging the common market that has been created. These ventures are actually acting as the proof point for the common market phenomenon in Africa. As the continent opens up more and more, African multinational businesses would be created through intra-Africa trade and development.

The doubling of Africa’s population by 2050 would most likely double the four trillion dollar common market. This means that more global businesses would be coming into Africa to leverage the market. They would create jobs and add value to raw materials because labor is cheaper and available in Africa. The youthful population would be supplying that needed labor in all sectors — especially technology. This means that we need to be creating the educational opportunities that the youth need to enhance their skills. Guess what – that can now be done online. Harvard is offering fifty-seven free online courses during the pandemic.[19] Many local and international educational institutions are moving their classrooms online, so distance is no longer a barrier to education. eCampus is experiencing exponential growth due to the demand. 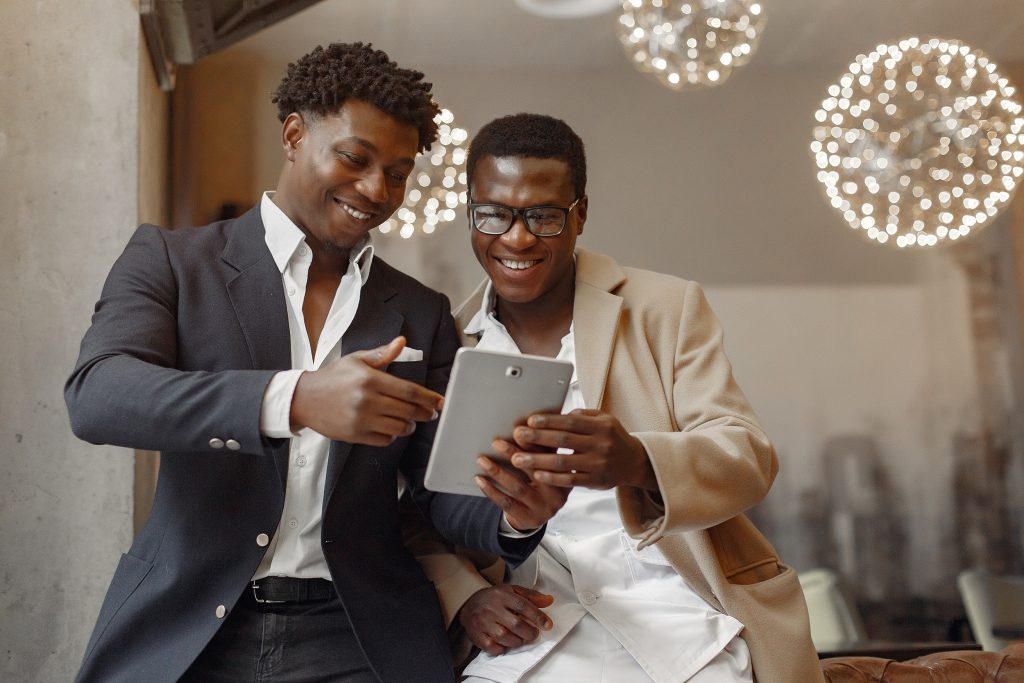 The phenomenal success of Ghana’s Year of Return[20] initiative is a result of succeeding initiatives like Panafest, Joseph Project, etc., which were all aimed at getting people of African descent to return home. December 2019 was the climax of this movement which saw 1.5 million people of African descent from the US, Europe and Asia coming to Accra.[21] Racial injustice in the US has led to movements like #BlackLivesMatter resulting in more and more African Americans relocating to Africa.[22] Ghana has actually become the preferred destination because of — among other reasons — the setup of the Diaspora African Forum (DAF)[23]. DAF is recognized by the African Union and has worked with the Ghana government to secure citizenship for a lot of the returning diaspora.[24]

Marcus Garvey in 1914 started pushing people of color to connect to their roots – he envisioned an African nation through the Universal Negro Improvement Association (UNIA).[25] Garvey is known for saying “Our success educationally, industrially and politically is based upon the protection of a nation founded by ourselves. And the nation can be nowhere else but in Africa.”[26] Bob Marley who was inspired by Garvey pushed the message in his songs. He personally came to Africa first to visit Ethiopia and Kenya then again in 1980 to visit Gabon by way of his love affair with Pascaline Bongo and then played at the Independence Day of Zimbabwe – paying his own way for the trip.[27] Rita Marley later moved the entire Marley family to Ghana in 2000 making their abode in the mountains of Aburi overlooking Accra[28]. W.E.B DuBois moved to Ghana in 1961 at the invitation of Kwame Nkrumah, where he lived until his death – that history resonates deeply with many African Americans seeking a society that embraces them, rather than treating them as second-class citizens.[29]

Rabbi Kohain Halevi, owner of Mabel’s table guesthouse and restaurant, has lived in Ghana for 25 years. “I was 33 years old in 1987 when I fell in love with Ghana,” said Halevi, 65. “It took me seven years and 13 trips before I could finally move to Ghana and make this my home.”[30] Dr. Marcus Manns moved to Ghana in June 2000 to start his chiropractic and wellness center[31] which is now a successful business and in the process met his wife – they now live between Accra and the US with their five kids.[32] Muhammida el-Muhajir says as an African American in the US, she felt she could ‘never win’ so she relocated to Ghana to set-up her business WaxPrint Media which is thriving.[33] Voltaire Xodus moved to Ghana without first visiting to launch his startup, WeUp, because according to him it is peaceful.[34] His sister Ramona, who is a co-founder, has since joined him in Accra. 28-year-old Deijha Gordon left her family in Brooklyn, New York to start a food truck business in Ghana after visiting for the year of return.[35] Ingrid LaFleur who ones run for the mayor of Detroit could not return after her “Year of Return” visit. She has gone on to launch The Afrofuture Strategies Institute (TASI) with a triangulated location in Accra, Kigali and Johannesburg. Derrick Ashong and Lucia Brawley, co-founders of Amp Global Technologies, moved from Los Angeles to Mauritius to launch The Mic: Africa, the first multi-platform TV format created in Africa to be exported around the world, all powered by their Take Back The Mic (TBTM) app.

In conclusion, COVID19 has generated an unintended consequence of speeding up the digital innovation in Africa led by the youth population with the common market as their reach and the returning diaspora as the icing on the cake – welcome to the new normal.