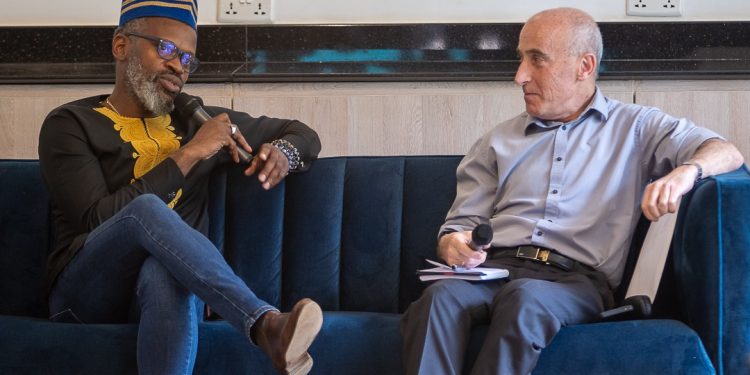 Adanian Labs CEO John Kamara (L). Adanian Labs has expanded out of Kenya and into Tanzania, Zambia, South Africa, and Nigeria, which are some of Africa's biggest start-up and tech hubs. [Photo/Adanian Labs Twitter]

Adanian Labs wants to get past the current phase, in which the flow of deals around the world is slowing down, and rise to power more start-ups and take over more markets across the continent.

With tech giants like Google, Visa, Microsoft, and East Africa’s biggest telco Safaricom snapping up tech workers on the market, the tech skills gap in Africa is becoming a challenge.

This shortage has driven companies like Adanian Labs to come up with ways to close the gap. This is in addition to improving the digital and tech skills of the techies whom the multinationals are targeting.

Adanian teamed up with US tech company, Nvidia, last year to train 4,000 AI engineers in Africa (through AICE) over the next few years. The partnership would also see the two companies work on other projects together.

Adanian Labs has also recently teamed up with LBank, a cryptocurrency exchange, to build a community of crypto and blockchain developers in Africa. Through ABC, they will also run a crypto accelerator that will help African entrepreneurs build the next generation of start-ups.

The venture studio is trying to get its Series A funding, according to Tech Crunch. It was also one of Emurgo Africa’s first partners and one of its first investors. Emurgo Africa is a branch of Emurgo, which is the official commercial division of the Cardano blockchain.

It is trying to get “Cardano’s blockchain adopted as the technological platform standard in Africa for socially impactful solutions.”

In the future, Adanian Labs wants to get past the current phase, in which the flow of deals around the world is slowing down, and rise to power more start-ups and take over more markets across the continent.

In just two years, Adanian Labs has expanded out of Kenya and into Tanzania, Zambia, South Africa, and Nigeria, which are some of Africa’s biggest start-up and tech hubs.

It wants to have a presence all over Africa by 2025, and it is working hard to help build 300 companies in the next five years. In the meantime, the lab plans to set up shop in the Democratic Republic of Congo (DRC), Senegal, and the Ivory Coast. It is also thinking about using a franchise model to speed up its growth.

Adanian Labs start-ups can easily expand into other markets because they can use the existing infrastructure of the venture studio as a springboard.

At the time he saw how fast the start-up ecosystem was growing and how, in most countries, accelerators were the default starting points. He thought that the continent was ready for more help than what most accelerators offered, which was mentoring and training.

“The start-up ecosystem was getting bigger, but I couldn’t help but notice that accelerators were a problem. You know, when start-ups leave accelerators, most of them don’t really have a chance to move on to the next level,” Kamara told the tech publication.

From this, he said he knew there was a way he could build something that would give African founders more power and give start-ups a better support system.

“I could also use it to build a business in a way,” he quips.

Adanian Labs works with tech start-ups that are still just ideas. It gives them full support, including money, advice, and help with running the business.

It puts up to US$120,000 of its own money into these new businesses. By the end of the one-year programme, the start-ups should have launched a product, onboarded customers, and have repeat customers. They should also have a clear revenue model and have raised seed funding or be close to doing so.

Kamara says they help these start-ups build their teams and iterate as needed until they find a product that fits the market.

He adds that AI and blockchain experts from India are hired by a lot of companies in Africa and elsewhere.

“We want to change that, which is why our capacity building part is so important: that’s a lot of value that’s been lost. Also, we need to be able to be local if we want to build 300 companies,” he adds.

With the world moving toward Africa, Adanian Labs is getting young people ready to work in the tech space of the future.

Read: African tech ventures that exited this past decade