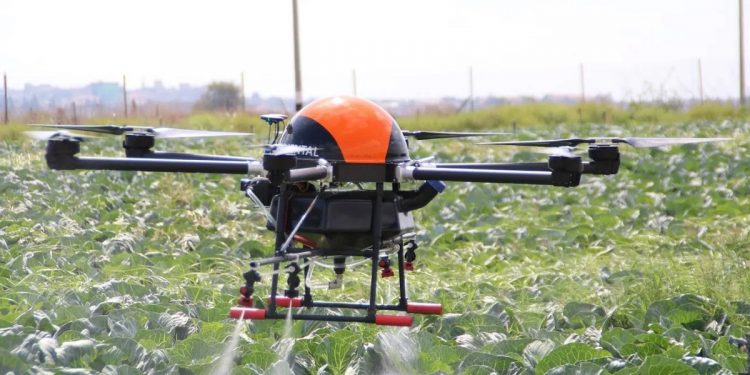 A drone spraying a cabbage farm. Many graduates are embracing digital agriculture and marketing their produce. [Photo/Smart Farm Magazine]

Agritech – the future of Africa

Another example is using the Internet of Things (IoT) to increase productivity.

Agritech – the future of Africa could be the silver lining for Africa’s longest walk to economic freedom with its adoption likely to catapult the continent’s achievement of poverty eradication.

Africa, as a continent, has suffered many woes and some of them have been due to the unavailability of resources and infrastructure which could help it achieve some form of alleviation of insufficiency. With the internet and technology advancement around the world, the continent does not have to reinvent the wheel but it can leverage the availability of this technology to advance its own agenda.

Since the beginning of this year, the world has been focused on fighting the Covid-19 coronavirus which is threatening to grind global operations to a halt.  However, East Africa has had the unlikely misfortune of having to battle the virus which originated from Wuhan in China and a locust invasion whose scale has not been witnessed for more than seven decades.

But, while technology has been employed to deal with the coronavirus, it is now coming in handy in helping fight and mitigate the effects of the desert locust invasion.

The UN-FAO has joined forces with international researchers to create new tools which will help affected countries stay a step ahead of the roaming pests.

Keith Cressman, Senior Locust Forecasting Officer at FAO says that none of the affected East African countries are usual frontline areas for locust infestations. With this, the countries have none of the available systems and tools in place to deal with the menace.

With the restrictions that come with the Covid-19 coronavirus, FAO has come up with technology that helps with data collection tools to satellite imaging systems. These help monitor the presence of locusts and help predict the pests’ movements.

Kenya is expected to soon become the first country to test FAO’s drones for locust surveillance.

Cressman added FAO is speeding to make easy-to-use versions of these tools for use by field officers with or without training in locust control. The beneficiary countries are South Sudan and Somalia in addition to East Africa’s economic hub, Kenya.

For the hard to reach areas, FAO is introducing drones to become the eyes in the sky in Kenya to search for green patches in large arid areas and check for infestations. It would be hard to successfully search the prime feeding grounds for locusts from the ground and so drones become an important tool for the mission.

Rotary and fixed-wing drones will be used for the surveillance and FAO is prototyping both since each has its own unique strengths.

As well, going beyond observation, Cressman says that the drones could also be used in treatment campaigns if fitted with micro-sprayers and used on targeted missions to treat small infestations which are difficult to spray otherwise.

With these trials, this could be the determinant of how future agriculture in not only Kenya, but on the continent, could adopt technology to increase efficiency.

Africa is still hugely virgin when it comes to innovation and with the reality that the continent could comfortably feed the world, adopting technology could be the avenue through which this can be actualized.

Another example is using the Internet of Things (IoT) to increase productivity.

A project in the lakeside town of Kisumu, Kenya, is using IoT to increase fish production in ponds by monitoring water temperature and pH values. LakeHub and Pinovate have come up with AquaRech which sends information and feeding instructions to farmers through an Android and iOS app.  The AquaRech programme targets 30,000 fish pond farmers countrywide in a bid to increase fish production as demand increases in the East African nation.

While Kenya is the hub of innovations in Africa, there is still much more that is to be done when it comes to agriculture. With the future promising good returns for those invested in farming, technology will be especially useful as the continent embraces the 4th Industrial Revolution (4IR).

And this is just the beginning.

African farmers suffer immensely from post-harvest losses because of challenges like storage and transportation. Since they cannot get their produce to the market in good time, it means that their labour goes to waste subjecting them to poverty.  However, with mobile-based applications like Twiga in Kenya, deliveries are assured since the farmers have a reliable way of getting their commodities to the market.

By sourcing from more than 17,000 producers with deliveries three times a week to over 8,000 retailers, Twiga is creating a critical link between farmers who are the primary producers to food manufacturers and retailers in a convenient way.

Heading into the future, the current farm-to-factory or farm-to-market processes which are expensive will be eliminated meaning that many farmers can get their produce delivered to the end-user without much trouble.

AgriTech in Africa has a huge part to play in tackling food insecurity on the continent with its innovative services.

A UN report released in February last year said that hunger continues increasing in Africa threatening hunger eradication efforts as per the Malabo Goals 2025 and the 2030 Agenda for Sustainable Development SDG2.

Data in the Africa Regional Overview of Food Security and Nutrition indicates out of the 257 million hungry people in Africa, 237 million are in sub-Saharan Africa. The remaining 20 million are in Northern Africa.

In addition to Twiga, South Africa has Aerobotics which helps with pest and disease management making it easier and efficient for farmers to produce food. The solution uses high-res drone images which provide insights to farmers on what they need to do on their farms.

This eliminates the need for expensive equipment and manpower that would be required to do the same jobs. Indeed, tech is making agriculture chic thus attractive to the majority who are the youthful population of the continent.

Africa’s largest economy, Nigeria, has an almost similar solution to Twiga but probably with more integration. The FarmX Mobile App is a B2B2C platform which matches farmers’ requests with service providers like input suppliers and producers as well as financial services.  The app also integrates a payment option meaning everything is done in-app which also creates greater convenience.

It also matches interns to farmers for reduced labour costs and capacity-building for the next generation of farmers.

From drones to payment solutions being offered to farmers and suppliers, the African agriculture scene will change greatly as more tech solutions come up to address the gaps.

The continent has suffered immensely from broken supply chains but with tech, these could soon become a thing of the past.  During the lockdown in Kenya’s major towns, Twiga partnered with Jumia to deliver foodstuff to consumers creating a quality of sustainability for producers who would have otherwise lost their farm produce.

As a continent, technology is the solution farmers have been waiting for. While it may not be a panacea, it definitely is a positive place to start.

Kenya moves to save its dwindling tea fortunes