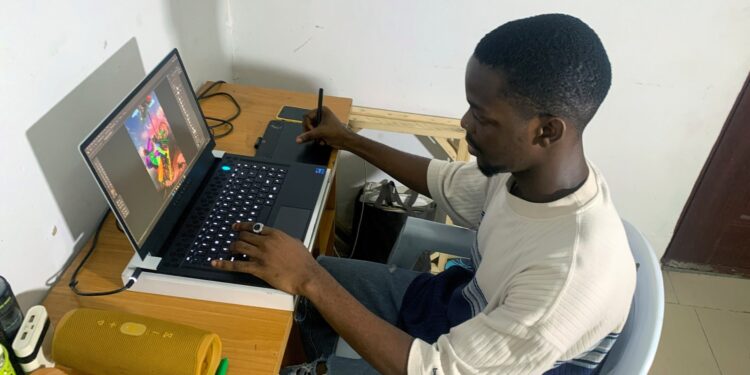 An African artist working on an NFT. NFTs are assets in the digital world that can be bought and sold just like any other piece of property. [Photo/Reuters]

An NFT is a digital title for a piece of content that may be sold on auction sites but is non-returnable because it is unique and irreplaceable.

by The Exchange
in Africa, Cryptocurrency, Investing
0
Share on FacebookShare on LinkedIn

Non-Fungible Tokens (NFTs) are the new opportunity for anyone with anything they can monetise and access to the internet to reap the benefits of minting money on the World Wide Web.

NFTs are “one of a kind” digital assets that can be traded like any other piece of property, but NFTs do not exist in any tangible form. It is possible to think of virtual or real assets as tokens that may be exchanged for tokens.

Therefore, an NFT is a digital title for a piece of content that may be sold on auction sites but is non-returnable because it is unique and irreplaceable. Because of this, its value fluctuates and it is useless as a means of exchange. Cryptocurrency and blockchain are the foundations of NFTs.

So many people were shocked to learn that renowned Kenyan marathoner Eliud Kipchoge NFTs tokens worth KShs4 million (US$36,000) of two DVDs documenting the highlights of his career. They were baffled as to why somebody would spend so much money on something that could be viewed, downloaded, and screenshotted for nothing.

When it came to how the buyer wanted to use the films depicting his accomplishments in the 2018 Berlin and 2019, popularly known as the INEOS 1:59 Challenge, when he set the world record as the fastest marathoner ever in those two races, things got a little more confusing.

Many people had no idea that the NFT mania had been going on for quite some time. Millions of dollars are being paid for songs, videos, and digital artwork.

When digital artist Mike Winkelmann sold a JPG file for US$69.3 million, it was one of the largest NFT transactions in recent memory. For a living artist, it was the third-highest auction price ever and a new record for digital artwork.

Data science and digital media executive at Safaricom Njaramba Wanjau believes that NFTs may be used to monetize creative and artistic work by making it into a simple, creative art form that can be accessed through modern technologies.

Using smart contracts, NFTs can be sold on digital marketplaces while protecting copyrights. According to Wanjau, “their value is determined by what is sold and the interest generated by that sale”.

Since Jack Dorsey’s first tweet was auctioned as an NFT for Ksh311 million (US$2.9 million), this is why.

Flagship Technologies director Frank Deya says that the beauty of NFTs rests in the capacity of creatives to sell their work directly to followers and supporters.

In this way, they can avoid the middlemen in the value chain of their art. It is possible for musicians to sell tokenized tickets for their concerts, which are able to be confirmed on the blockchain and so eliminate ticket fraud,” adds Deya.

There are many possible purchasers willing to pay a large sum for an NFT because of its legitimacy, scarcity and global transferability, he claims.

“Its metadata cannot be modified because of its immutability (inability to be altered).”Increased real-world integration is on the minds of NFT collectors,” he continues.

NFTs can be resold in a secondary market, transferring ownership of the content from the copyright owner to the buyer. Even Kipchoge has a long-term shot at profiting from his freshly sold NFTs because they can be traced back to him.

It is possible for NFTs to be sold again, but the original owner will continue to reap the benefits of their ownership.

Experts disagree with those who claim that NFTs are merely another fad or bubble, arguing that they are the technology of tomorrow.

Read: Painting a hollow canvas: The plight of African artists amid C-19

Imagine it as a tool for artists to make money off of their work. Playing on bitcoin trends, they can gain the most for their money. According to Wanjau, “It asks for a paradigm shift so that they can plan for a long-term future.”

Deya’s position is that “NFTs are here to stay.”

Previously unimagined business models will emerge as a result of their efforts. An increase in the NFT value will be beneficial to the artists who created them. It will put an end to the practice of republishing works that have already been published. It will establish a solid degree of transparency and direct marketing that will significantly benefit creators in the future.”

So how can African artists and other content providers take advantage of the NFT bandwagon?

There is minimal to no technical skills required to create NFTs on these platforms. Connecting your crypto wallet to an NFT marketplace is the first step towards building an NFT. As long as you use the wallet address as your login information, you’ll never have to give out any other personal information.

“You will then upload your artwork and complete the process,” he says.

For artists to fully profit from NFTs, Wanjau advises that they must first realize the value of their own work. They also need to get interested in the technology that is predicated on openness and trust.

Of primary importance is finding an art form in which one may express one’s creativity and authenticity. Then they need to market it to increase interest. Wanjau argues that if an artist doesn’t market their work, it will be like “winking in the dark” – no one will see it and it won’t sell at auction, either.

As Prof Bitange Ndemo pointed out in this article in the Business Daily, establishing the authenticity and integrity of individuals claiming the right to use original representations as the basis for NFTs is now the most difficult challenge to overcome.

As there are so many creative works out there, tracing each one back to the original creators is nearly impossible. In order to verify the origins and provenance of a piece of work, regulated registers are needed.

Prof Ndemo stated that this may have a good impact on the creative industry by protecting purchasers from scammers.

You can read the original version of this article here.