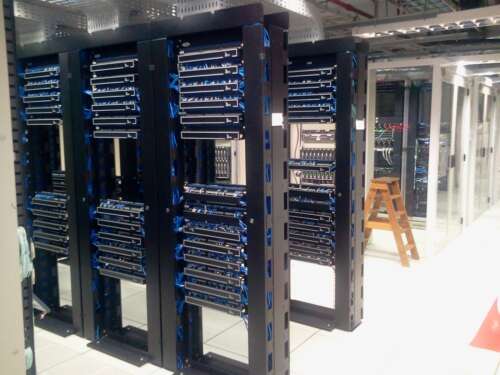 by Evelyn Shumba
in Investing, Tech & Business
0
Share on FacebookShare on LinkedIn

Data centers are Information Technology (IT) facilities responsible for the management of data in an organization. Data centers house state-of-the-art computing infrastructure with very powerful machines. Traditionally, data centers were associated with extensive use of space and a lot of hardware components to support big data storage and management services.

As technology evolves, the use and development of software-based data centers requiring less space are increasingly becoming more common.

Cloud computing, a modern model used for data centers is growing in popularity in Africa. This technological innovation allows for an integrated approach to data management services such as storage, applications, and servers. Cloud-based data centers have lower costs compared to traditional physical data centers. Most cloud computing services are outsourced from well-established companies that have the resources and experience to do so. Companies such as Microsoft, Amazon, and Teraco continue to invest significantly in cloud infrastructure, globally.

Analysts expect the data center market to grow significantly in Africa. Digitalization, E-Commerce, and investments in communication networks are fuelling the growth of the data center market. Other factors such as high mobile penetration are contributing to the use and development of data centers in Africa. Mobile penetration reached 44% in Sub-Saharan Africa in 2018. In Nigeria, open banking has been introduced, which is an innovation meant for utilizing big data banks that have to provide information to third parties about banking clients. This banking model relies heavily on the use of data centers and cloud computing.

South Africa is the biggest market for data centers and has a high internet penetration rate with 52 internet users per 100. Being one of the most developed countries on the continent, South Africa has a thriving digital sector with the digital sector contributing 6% to GDP. With the number of internet users and activity booming, data center services are in high demand, thus the potential for high revenue generation.

One of the factors with a significant impact on the success of businesses is the role of government in the private sector. The policies adopted by governments and the financial commitments to infrastructure development have a direct impact on the performance of the private sector. In Africa, governments are investing heavily in infrastructure. Investments in clean energy, satellite-based communication networks as well as business-friendly policies are amongst the supportive efforts by African governments in the ICT sector.

The Kenyan government is commended for introducing various initiatives to promote digitalization and internet penetration in the country. Investments in undersea fiber optic cables by Telkom in Kenya are paving the way for efficient communication networks which are vital for efficiently managing data centers. The Kenyan government also introduced the Universal Service Fund, which aimed at financing ICT innovation initiatives through licensing levies, reducing initial capital outlay costs.

Rwanda was named the top East African country with a well-developed ICT structure by UNCTAD. The government’s commitment to ICT development stretches to its fiscal budget, with its ICT sector budget equalling some rich countries in the OECD, at 1.6%. A friendly business environment has also encouraged major global ICT companies like Nokia and Microsoft to invest heavily in the ICT sector in Rwanda.

A lot of electrical power is used by the powerful machines housed by data centers. The existing power grids are currently unable to cater to the large energy demands of data centers. Various players have come in to meet the energy crisis by providing off-grid and cleaner energy solutions in response to energy challenges. For example, Distributed Power Africa has made substantial investments in solar energy in Kenya, Zimbabwe, and South Africa. Investments in cleaner energy sources contribute to sustainable environmental management efforts to combat climate change as well as provide energy security for uninterrupted power supply for data centers.

Power outages have resulted in the loss of data and disruption in service provision resulting in massive financial losses and charges incurred by data centers. The high growth of data centers and internet activity has called for an uninterrupted power supply that can also adjust efficiently to highly alternating electricity loads. UPSs have become an indispensable energy solution in the management of data centers. The adoption of a Service Level Agreement improves the efficiency of UPS solutions and further ensures energy security.

The labor force in Africa has in the past lagged behind in science and technological skills. Various governments are making efforts to redress the lack of such skills by implementing the STEM education philosophy. Under the Science and Technology Plan, the African Union is urging its members to commit 1% of their GDP to improve STEM initiatives. Countries like Zimbabwe have noted some positive attributes from the STEM program with an increase in STEM subjects pass rate as well as uptake by girls.

Digitalization is fast growing across the African continent with technological inclusion breaking geographical boundaries and constraints. A lot of people are participating in the digital space and increasing data traffic as well. Innovations in the financial sector demanding real-time data processing services also add to the massive load data centers have to efficiently manage. The existence and continued development of low-latency communication networks have ensured an efficient service delivery by data centers despite the big data volumes and speed requirements.

Below are a few examples of successful data center projects.

This company is one of the major players in the data center market in Africa with a market presence in Ghana, Nigeria, and South Africa. The company is showing a positive growth trajectory in terms of sales generation and the ability to make profits. It has been consistently paying multi-billion Rands in dividends yearly.

This is another successful data center company in Africa with operations in Ghana. It is the first and only carrier-neutral data center in West Africa. It outsources data management services to data centers that rely on other service providers for internet connection. RackAfrica is a unique data center that is independent of these Internet Service Providers (ISP). This positions the company to be highly reliable and eliminates third-party data management risks from their customers. The company has recorded high and sustained revenue growth over the past two years. For investors who would favor creating a data center company as opposed to buying shares in one, adopting the carrier-neutral data center will be ideal.

Developing data centers in Africa presents a lucrative investment avenue. ICT infrastructure to support data centers is being developed at a fast pace as well. Both governments and the private sector are combining their efforts to transform the African continent into a global digital powerhouse.

There are still gaps that need to be filled in terms of capacitating the labor force with the necessary skills. In addition, Creating a conducive business environment with less political influence and a stable and consistent policing framework will go far in improving the ease of doing business in Africa. Overall, investing in data centers in Africa is significantly beneficial to the investor and comes at a convenient time when e-commerce and digitalization are on the surge.