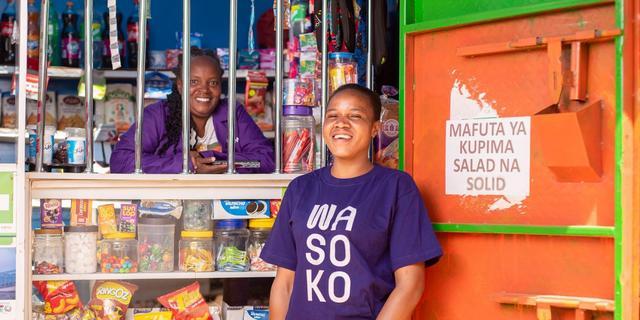 A kiosk vendor wearing a Wasoko t-shirt. Sokowatch has rebranded to Wasoko following its entry into Ivory Coast and Senegal.  [Photo/Wasoko]

Business-to-business e-commerce startups are emerging across Africa trying to replace middlemen, whose role in the supply chain is to link bigger suppliers and wholesalers to small traders.

Africa’s average household consumption has been on the rise, growing even faster than its gross domestic product (GDP) in recent years.

This has largely been driven by the increasing affluence, population growth, urbanization rates, and rapid spread of access to the internet and mobile phones in Africa presenting a myriad of opportunities for expansion in retail and distribution.

Retail spending in Africa is estimated at more than US$1.4 trillion by the Economist Intelligence Unit. Most of it happens in informal retail stores across the continent.

This figure is expected to reach US$2.1 trillion by 2025, and US$2.5 trillion by 2030, especially once the Continental Free Trade Area (CFTA) is properly implemented.

At least 90% of sales in many parts of sub-Saharan Africa happens through informal channels such as markets, kiosks, table top-sellers and street hawkers, according to PWC.

While Africa has a vast e-commerce potential, experts consider this opportunity largely untapped. A report released last year by the International Trade Centre (ITC), a development agency that supports small- and medium-sized enterprises, found that 10 countries were responsible for 94% of all online business in Africa in 2019.

As a result, new business-to-business e-commerce startups are emerging across Africa, working tirelessly to make it easier for informal retailers to access goods from distributors and suppliers.

These firms are being created to ease doing business for informal street vendors, open market stalls, and mom-and-pop stores by developing logistics and distribution services to help connect informal retailers to manufacturers and large wholesalers.

Most of these startups are trying to replace middlemen, whose role in the supply chain is to link bigger suppliers and wholesalers to small traders.

Currently, intermediaries add cost because they extract a margin on the goods that they buy.

The new digital platforms typically purchase goods directly from manufacturers and then link their inventory to stores, which means they can charge less than middlemen.

In African e-commerce, recent developments have been making the case for B2B being the key to unlocking Africa’s e-commerce potential. Businesses using this model are increasingly emerging and thriving, and some B2C businesses are changing their approach to B2B.

While a lot is being done towards easing business processes, shop owners and kiosks still have issues around access to capital and getting goods regularly and on time from suppliers and distributors.

This has seen a number of B2B e-commerce platforms receive sizeable rounds of funding to help resolve this issue.

Just recently, Sokowatch announced that it has raised US$125 million in Series B funding. This brings the company’s total value to US$652 million.

This round of funding comes barely two years after it closed US$14 million in Series A funding.

The B2B startup was launched in Kenya back in 2015 as an asset-light platform and a marketplace for distributing fast-moving consumer goods from suppliers to retailers.

What started in Kenya soon scaled into neighbouring East African markets Tanzania, Rwanda and Uganda in 2018.

“In managing the operations directly ourselves … we went from an asset-light backend distribution software platform to this market-facing platform that was out there delivering goods directly to shops themselves,” CEO Daniel Yu said.

At this point, Sokowatch was full-scale asset-heavy, owning and leasing facilities in its distribution chain from warehousing to logistics.

The firm also rebranded to Wasoko following its entry into Ivory Coast and Senegal.

“Sokowatch started as this kind of backend brand. We wanted a brand that could be more front and centre for the African retailer and easily pronounced across all markets while reflecting our East African roots. So that’s why we’ve rebranded now to Wasoko, meaning ‘people of the market,” Yu said.

The seven-year-old company said this round of funding will go towards exploring expansion into Nigeria as well as Southern Africa while consolidating its position across its six current markets.

It will also make hires and expand its product offerings to point-of-sale merchant systems, bill payments and social commerce, verticals it might build in-house or back and acquire companies that provide such services.

The company also offers a buy now, pay later option for retailers who need working capital to order more goods. Buy now, pay later offerings are the latest trend for B2B retail and e-commerce companies. They see it as a sticky option in an otherwise volatile space where retailers aren’t committed to one player, given non-differential offerings.

“We do buy now, pay later to our merchants and it’s a significant part of our business. But we’ve been able to do that on our own without raising any kind of separate debt facilities. But we’re looking at debt financing options,” Yu said.

Wasoko is not the only firm making huge strides in the African B2B e-commerce space. Another such company is Marketforce.

The retail B2B and end-to-end distribution platform founded in Kenya, raised US$40 million in Series A funding back in February for its merchant inventory financing and expansion across Africa.

In December 2021, Nigeria’s TradeDepot raised US$110 million in new equity and debt funding as the firm sought to bring in more retail stores and expand its buy now, pay later service across the continent. The start-up operates an asset-heavy model across Nigeria, Ghana and South Africa.

The Series B funding came almost 18 months after raising US$10 million co-led by Partech Africa and the International Finance Corporation (IFC).

Although no B2B retail e-commerce player has a monopoly on the Nigerian market, it is more saturated than other markets based on the numerous players vying to digitize the country’s informal supply chain from Sabi to Omnibiz and Alerzo.

Wasoko, MarketForce, Twiga, Maxab, Sabi, and Omnibiz, have raised over US$400 million in venture capital and debt financing.