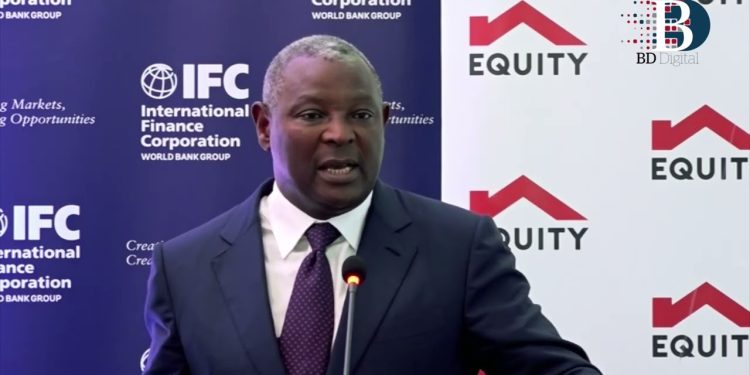 IFC's first investment in Africa is part of its objective to increase green equity investments by financial institutions.

The effects of climate change could lead to an increase of almost 5.8 million people living in severe poverty in the Caribbean and Latin America by the year 2030.

According to the World Bank, the outlook is even bleaker for island nations, which are projected to be completely submerged by the middle of this century, as well as for cities in Southeast Asia, Africa, and the Middle East, where rising temperatures and sea levels will compel many people to move in order to ensure their survival. The prognosis for these cities is even direr.

The International Finance Corporation (IFC), which has recently bought a 6.71 per cent stake in Kenya’s largest bank, is the impetus behind Equity Group’s decision to prohibit loans for coal projects. Equity Group has made this decision public.

This is a step in the right direction in curbing the effect of climate change, as it is estimated that burning coal is responsible for almost half of all carbon dioxide (CO2) emanations and 72 per cent of all greenhouse gas emissions that result from the generation of energy around the world.

In the effort to combat the effects of climate change, the worldwide lender is putting its resources to use by funding businesses that are good for the environment and preventing financing for firms that pollute.

IFC purchased its equity share from Britam and has strengthened its commercial relations with equity bank by substantial marshaling loans to be re-loaned through its regional subsidiaries. The international financial institution and its business associates announced on Tuesday that they had reached an agreement to provide the bank with a loan of a total of US$165 million (Sh19.1 billion).

“To assist in the creation of jobs, to respond to climate change, and to utilise the potential given by the digital economy, IFC’s approach in Africa centres on providing assistance to small enterprises and projects that are favourable to the environment. The strengthening of IFC’s partnership with Equity

Group is a reflection of this strategy. It will contribute to economic expansion in Africa when the continent is still recovering from the COVID-19 pandemic’s effects, “IFC Vice President of Risk and Finance Mohamed Gouled was quoted as saying.

This is IFC’s first investment in Africa, and it is in line with the organisation’s strategy to expand the proportion of green equity investments made by financial institutions. As a result of this equity investment, Equity Group Holdings has committed to prohibiting loans for coal projects. In addition, Equity Group has committed to invest US$80 million in equity in climate-related initiatives across all of its companies over the next five years.

The new anti-coal policy that Equity has implemented comes at a time when the nation is getting ready to begin mining the commodity after significant quantities were discovered in Kitui County’s Mui Basin.

Any utility firm that derives more than 20 per cent of its energy or revenues from coal by producing 10 million tonnes or more of coal or has an installed coal-fired capacity of 5,000 megawatts or more will not be eligible for financing from this bank. One of the most important companies that rely on coal as a source of manufacturing fuel is Bamburi Cement.

Equity follows the lead of other African banks in developing anti-coal policies in response to requests from shareholders and investors. This is a trend that began in affluent nations and has now spread to developing economies. Earlier on, the Standard Bank of South Africa decided to implement a strategy that would allow it to be more discerning in the coal ventures it would be willing to finance, with the primary intention of reducing emissions.

The 1,050-megawatt coal power station that was planned to be built in Lamu, Kenya, was scrapped after crucial associates, together with financial establishments and General Electric, withdrew their support for the project.

According to Mohamed Adow, the leader of PowerShift Africa, a coalition that advocates for climate policies across the continent, “This continent is incredibly blessed with renewable energy.” Adow was speaking in reference to Africa’s largely undeveloped wind, solar, and geothermal resources. “This continent is incredibly blessed with renewable energy.” According to a recent report published by the United Nations, an increase in the amount of cash that is made available to initiate projects involving environmentally friendly technologies across Africa will be addressing equally the causes of climate change as well as its repercussions of it.

“We will essentially be powering our continent and raising people out of poverty without adding emissions,” he argues.

“We will be able to do this without increasing emissions.” “The only thing we need now is the investment.”

The private lending arm of the World Bank has revealed its new strategy for promoting environmentally responsible practices inside equity investments made in financial institutions. The International Finance Corporation (IFC) has announced that it will stop making equity investments in other financial institutions if those institutions do not have a plan to reduce or eliminate their involvement in coal-related operations. The objective of the “30 by 30 Zero Programme” is to assist the financial industry in reaching its goal of increasing climate-related loaning to 30 percent and lowering its exposure to projects related to coal to zero by the year 2030.

Read: Africa voice in COP26. Will it be heard?