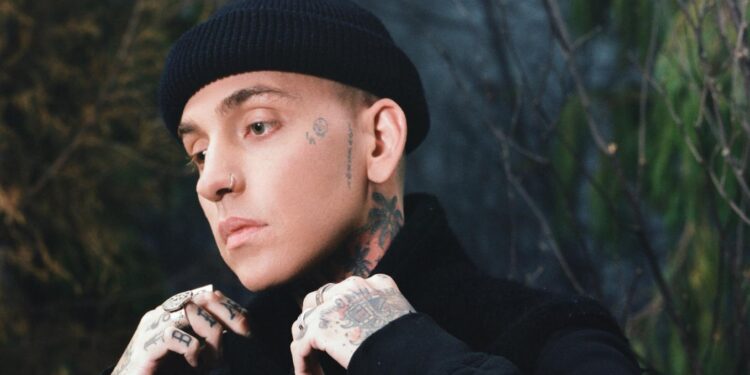 His music career started while in high school when he joined a rock band called Polaroid as a singer. It was a Florida –based rock band.

Mathew Tyler Musto is an American musician, record producer, singer, and songwriter. He was born on November 27, 1990, in Daytona Beach, Florida, and later shifted to Palm Coast, Florida when he was a child.

He was attracted to music when he was in fourth grade through artists like Blink-182, Rancid, and more.

Mathew got introduced to bands like; Alkaline Trio and New Found Glory.

His music career started while in high school when he joined a rock band called Polaroid as a singer. It was a Florida –based rock band.

After leaving the band, Mathew started his solo journey of a music career when he went to Atlanta to work with Ne – Yo.

Recently, in 2021, Mathew won the MTV Video Music Award for Best Alternative Video for the song My Ex’s Best Friend for which he gave vocals.

He has also been nominated for Best New Pop Artist for his song Himself presented by iHeartRadio Music Awards.

Mathew collaborated with artists like Justin Bieber, G-Eazy, Billie Eilish, and Mike Posner. His collab with Justin Bieber for the song ‘Boyfriend’ debuted second on the Billboard Hot 100.

His single ‘Idfc’ was a grand success and peaked on Billboard R & B Hot 100 charts in 2015 and became popular and streamed over 22.5 million times on SoundCloud.

The second single, ‘90210’, featuring G-Eazy gained reached above 11 million streams on SoundCloud and over 9 million reaches on Spotify.

In April 2017, Mathew released his third album, ‘Digital Druglord’ and it reached 14th place on US Billboard 200 chart as well as entered other charts worldwide such as; Netherlands, Canada.

He signed a $10 million deal with Interscope that got the rights to Digital Druglord along with the studio album and their following singles.

His album, ‘Cashmere Noose’ still hits SoundCloud. Also to add, the new version of the album, Cashmere Noose made it to the top 2nd place on iTunes R & B charts and No6. on all other iTunes, just after Drake’s Views and Beyonce’s Lemonade.

Mathew joined a Mission: ‘Cure’, a non – commissioned and dedicated to finding a cure to chronic pancreatitis. For this contribution, he was awarded the ‘Courage Award’, spreading hope among the patients. He also boosted them with his speech at the Gala event.

He partnered with the brand PopSockets and contributed 50% of the revenue of his branded products to Mission: Cure in November 2018.

Mathew was born in Daytona Beach, Florida. His father is a Catholic (Italian).

He was allured towards music in fourth class and was introduced to different bands like; Alkaline Trio and New Found Glory and followed the music of singers like; Blink – 182 and Rancid.

Mathew was diagnosed with Chronic pancreatitis caused due to high alcohol consumption. In April 2016, when he was in the hospital, he created his album, Digital Druglord, and took his time to rehab.

The next year in August 2018, Mathew accompanied the force for the Mission: Cure, which was carried to find the cure to this disease, for which he was awarded the Courage Award for spreading hope and inspiration to live.

Furthermore, he collaborated with PopSockets, the brand, and granted 50% of the revenue of his branded products for the Mission.

Recently in 2021, April 11, they announced their engagement through Michele’s Instagram.

On September 20, 2021, Mathew declared that they were expecting their second child.

Mathew was into music since fourth grade. In college, he was the lead singer of the band, Polaroid.

The band released one album called Paint The Town, one demo named, The Cure Demo, and one EP named Inside And Out. All of these are differently describes as; pop-punk, garage band, and punk rock.

During his high school, the band Polaroid signed with Leakmob Records.

In 10th grade, Mathew dropped out of school for music. As he succeeded, their music got influenced by emo. By 2008, he began writing his music.

After leaving the band, Mathew started a solo career and moved to Atlanta to work and create music with Ne – Yo.

His first EP titled, Brightness was released in 2008. Later in 2009, another song, Contrast was released followed by Exposure in 2010.

Mathew released his Christmas song, I Hate the Holidays with Tyler Carter’s input, the former member of the band, Woe, Is Me in the late 2010s.

Followed by his another single, Douche Bag in January 2011.

Mathew decided to use his nickname, Blackbear as his stage name while making music.

The first song released with the name Blackbear moniker was Marauder Music by Mike Posner in November 2011.

He co-wrote Justin Bieber’s song, Boyfriend which reached No2 on the Billboard Hot 100 chart in 2021.

Intending to become an R & B singer, Mathew released his debut piece, Foreplay on April 20, 2012.

The releases were under his nickname along with the producer, songwriters such as Maejor Ali and James Blake, and singers like Justin, Mike Posner.

He appeared on End of the Road of MGK’s from the Lace-Up album, launched on October 9, 2012.

Blackbear released the EP, Afterglow on April 20, 2014. It reached a high Four on Billboard’s Uncharted list of releases along with upcoming artists.

In 2014, Mathew became one of the first solo independent artists to commerce streaming on SoundCloud.

His original, Cashmere Noose can still be seen on Blackbear’s Page on SoundCloud. The remix version of the song reached No1 on the iTunes R & B charts and No6 on worldwide charts of iTunes.’

His track, Make Daddy Proud was late confirmed as the next promotional title track for his third album Digital Druglord.

Blackbear released the single, Do Re Mi in March 2017.

Additional to his music, Mathew produced and wrote for many famous artists.

As for now, Blackbear is signed to Island Records.

They are not married but have had a child and are together since 2017.

As for a rough record, for singles he has 40; promotional singles are 10; Collaborative albums – 2 and 6 EP’s till now.

Blackbear is signed to Columbia Records and Island records.

At an early age, he was influenced by singers and different bands. He joined a band named Polaroid in his high school times.

Read: Of untold African stories: The dilemma of the African writer