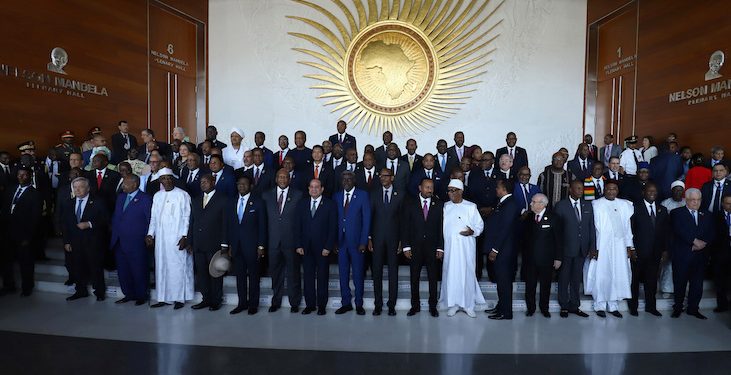 African Heads of State pose for a group photo during the opening of the 32nd Ordinary Session of the Assembly of the Heads of State and the Government of the African Union (AU) in Addis Ababa, Ethiopia, February 10, 2019. (Photo/ REUTERS)

Africa’s progress will be shaped by a fast-growing middle class with rising spending power; and the growing integration of Africa’s markets.

Africa’s rapid economic and social change will give the continent a bigger role in world global affairs and the global economy.

More specifically, sub-Saharan Africa’s population is growing at 2.7% a year, and GDP needs to grow at least as fast. According to the World Economic Forum, Africa’s economy is expected to grow by 3.8% this year more than twice as fast as South Asia (1.2%) and Latin America (0.9%).

In this context, and in contrast to many other regions, sub-Saharan Africa’s working-age population is growing faster than any other age group, providing a valuable opportunity for accelerated growth. However, capitalizing on this potential will require bold transformative reforms. Africa, more than many other regions, desperately needs to provide the education and skills training necessary for the jobs of the future. In an article published by World Economic Forum on January 18, 2022, in addition to a skilled workforce, sustained growth will require that new job entrants are matched with new job opportunities.

Africa’s progress will be shaped by a fast-growing middle class with rising spending power; and the growing integration of Africa’s markets.

Over the past few decades, Africa has been painted as a child in need of development and a rising economic power. Brookings said that one thing is certain, the transformation that Africa has undergone in recent decades has been remarkable.

According to Observer Research Foundation, countries would need to engage in smarter collective bargaining and voice their interests in unison for the continent to emerge as a meaningful player on the global stage.

Africa’s role in the world economy derives from its economic importance to the rest of the world in international trade and as a destination for international investment. Africa has recently become home to the largest free trade area in the world, both by area and by the number of countries.

As economies have been hard hit by the Covid-19 pandemic, the Africa Continental Free Trade Area (AfCFTA) holds economic promise for the continent. The AfCFTA comprises 55 countries with a population of 1.3 billion and combined GDP of about $3.4 trillion. Business leaders and observers regard economic and regional integration as essential for accelerating Africa’s manufacturing, e-commerce, and digitization to reduce an over-reliance on imports, especially from China.

However, there is still much more to do as major components of the agreement still must be negotiated, between many countries and regional economic communities. Moreover, according to the IMF, removing non-tariff barriers could be up to four times more effective in boosting trade than tariff reductions. Accordingly, the Forum supports trade facilitation projects in Malawi, Mozambique, Nigeria, Senegal, Uganda, and Zambia from simplifying import and export documents and procedures; to designing and introducing a new framework for licensing customs clearing agents.

“More than one-third of that export potential is explained by frictions, namely, static untapped export potential, which implies that $8.6 billion in trade could be realized by engaging actively in efforts to identify and address current market frictions in African trade today,” added the report.

Read: African agriculture: who will own the future?

The AfCFTA has the potential to reduce the region’s exposure to global disruptions and boost local manufacturing and productivity. This will be key as the region endeavours to develop a regional manufacturing network to support the access to vaccines manufactured in Africa.

Improving health and reducing the impact of diseases

There is no scope for businesses and emerging partners to join governments in the fight against diseases through strengthening technological innovations and health systems.

Significant public health improvements have been made in Africa over the past several decades. Most countries are making good progress on preventable childhood illnesses and communicable diseases. HIV/AIDS and malaria continue to have a widespread detrimental impact on Africans, but treatment options are improving. Across the continent, life expectancies and healthy life expectancies are rising. There have been substantial declines in maternal and child deaths, and the incidence of chronic malnutrition among children under five has decreased by almost 10 percentage points from 1995.

Importantly, the region is moving quickly to build up its capacity to manufacture and distribute vaccines. Recently, BioNTech struck an agreement with Rwanda and Senegal to initiate the construction of the mRNA vaccine manufacturing facility in mid-2022, with an initial capacity of 50 million COVID-19 vaccine doses per year.

According to the World Economic Forum, the digital transformation of African goods and services markets and supply chains will continue to accelerate in 2022; however, infrastructure investment, education, and training will be crucial to fully leverage the Fourth Industrial Revolution.

The Forum in an article published on January 18, 2022, said entrepreneurs and SMEs are fundamental to innovation, economic growth, and job creation in Africa. In particular, for these businesses to grow, create more jobs, and generate economic growth, they need access to capital.

However, a renewed focus on innovation and digitalization is required for these companies to increase their competitiveness and compete in the global economy. While digital transformation offers SMEs opportunities to innovate and grow, significant barriers remain to prevent the realization of these opportunities.

The impact of climate change in Africa goes beyond food insecurity; it impacts the spread of infectious diseases, biodiversity extinction, and direct loss of human lives. Africa contributes the least of any continent to global warming but is the most vulnerable to the impacts of climate change.

Climate finance is certain to be the top priority, for African countries, at the upcoming 27th session of the Conference of the Parties (COP 27) to the UNFCCC taking place in Egypt, in November 2022. COP 27 will likely highlight the severe climate impacts facing the continent to deliver more support for climate adaptation and mitigation.

Mobilizing external financing from both public and private sector sources will be a top priority for most African nations. World Economic Forum said that adaptation costs for African countries, for the period between 2020 and 2030 are estimated to be between US$259 to $407 billion; and mitigation costs for the same period were estimated to be US$715 billion.