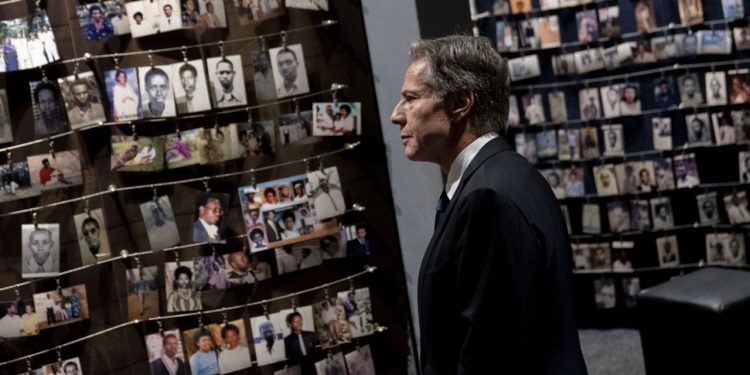 Blinken stated that Kagame and Congolese President Felix Tshisekedi had decided to handle the conflict in eastern Congo directly.

US Secretary of State Antony J. Blinken issued a statement on Thursday in which he revealed that he had conveyed a request to the Democratic Republic of the Congo (DRC) and the government of Rwanda to stop funding rebels in eastern Congo. He warned that doing so would endanger regional peace in Africa’s Great Lakes.

Blinken stated that Kagame and Congolese President Felix Tshisekedi had decided to handle the conflict in eastern Congo directly.

Officials from the United States and Rwanda estimate that more than 130 armed groups are operating in eastern Congo, which has turned into a battlefield for militias that have killed and maimed people while making billions of dollars from the smuggling of minerals out of the region rich in natural resources.

The Congolese government and other African governments provide many of the organisations with weapons and funding.

In fewer than a week after United Nations investigators discovered “strong evidence” that Rwanda has been militarily meddling in the Democratic Republic of the Congo’s east, the U.S. senior ambassador is visiting Kigali. The Rwandan government disagrees with the U.N. conclusions.

His Tuesday discussion with Tshisekedi was centred on the crisis.

During a joint press briefing with his Rwandan counterpart, Blinken said,

“This week, I delivered the same message to Presidents Tshisekedi and Kagame: any support or collaboration with any armed organisation in eastern DRC threatens local populations and regional stability. Each nation in the area must respect each other’s territorial integrity.”

At a summit in Angola, Kagame and Tshisekedi spoke to ease tensions caused by the rebel rebellion. View More

Congo has previously accused Rwanda of supporting the M23 and sending troops there, which Rwanda has previously refuted. The M23 has denied receiving assistance from Rwanda.

The Democratic Forces for the Liberation of Rwanda (FDLR), which Rwanda accuses Congo of using as a front, has been a target of M23 and Rwandan operations in Congo. Rwandan Foreign Minister Vincent Biruta stated Kigali supported peace in the area when he stood next to Blinken.

M23 has been waging its longest-lasting onslaught in years since May, killing scores and uprooting tens of thousands of people in the process. According to U.N. analysts, it held a region in Congo by July that was about three times larger than it was in March.

According to Biruta, the FDLR and its factions are one of the irregular armed groups in the eastern DRC that must be destroyed.

Since May, M23 has been conducting its longest-lasting onslaught in recent memory, which has resulted in thousands of deaths and the displacement of thousands of people. According to U.N. analysts, it controlled a zone in the Congo by July that was roughly three times larger than it was in March.

Blinken also stated that he had brought up human rights issues with Kagame, including the case of Paul Rusesabagina, a political figure who is a citizen of Belgium and the United States who was found guilty of terrorism last September by a court in Rwanda.

Rusesabagina provided sanctuary to 1,268 individuals in 1994 while serving as the general manager of a five-star hotel in Kigali; his deeds served as the basis for the Oscar-nominated film “Hotel Rwanda.”

According to the prosecution, the National Liberation Front is a militia and the military wing of a political organisation with which Rusesabagina, 68, is associated.

Last year, while on a trip to Dubai, Rusesabagina vanished. He later reappeared as a prisoner in Rwanda.

Rusesabagina, who is currently serving a 25-year term, has not been freed by Rwanda, according to Biruta, the foreign minister.

“We adhere to the international and national laws when we deal with criminals who commit crimes against our country, our people,” he declared.

In May this year, the U.S. State Department determined that Rusesabagina had been “wrongfully detained.”