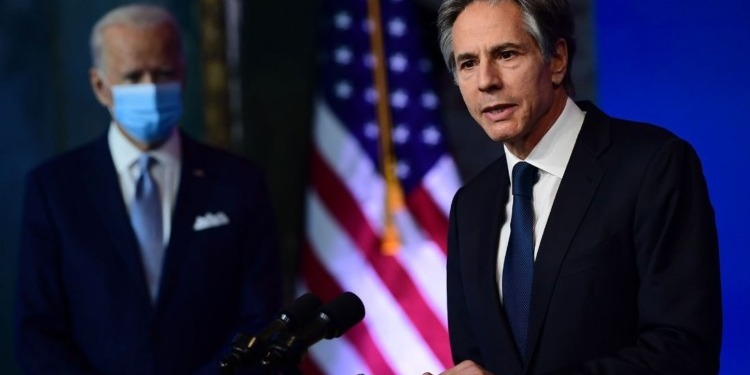 In what the US calls “underscoring the depth and breadth of our relationships with African partners”, Blinken will during the visit advance US-Africa collaboration on shared global priorities among them ending the Covid-19 pandemic and building back to a more inclusive global economy, combatting the climate crisis, revitalizing democracies and advancing peace and security.

Secretary Blinken will begin his trip in Nairobi meeting with Kenya’s President Uhuru Kenyatta. A government communique notes that the Kenyan meeting is to affirm the US’ strategic partnership with the East African nation.

It is no doubt that the Kenya election which is months away will top the agenda because Blinken will “underscore US Support for a peaceful and inclusive Kenyan election in 2022″.

Kenya’s has largely had polarized elections are driven by many factors but the biggest culprits are politicians who drive their agenda based on their tribal affiliations. As such, many elections are held under tense moments and in effect, they affect economic activities as businesses slow down or close down entirely until the election results are announced.

Kenya’s darkest election was in 2007 when the announcement of election results saw the country erupt in chaos. The anarchy led the country on a downward spiral where East Africa’s biggest economy shut down and went on its knees.

For the five years since 2002, Kenya registered its golden period in terms of economic growth. This was during President Mwai Kibaki’s first five-year term which ended in 2007. The Kenyan economy blossomed with the growth noticeable in both industry and tourism as well as in improved livelihoods.

At this time, the growth attracted the attention of the International Monetary Fund (IMF) and the World Bank because Kibaki’s government was not keen on funding from the Bretton Woods institutions. The government largely financed its budget from the revenues it collected which was unheard of in the previous regime. President Daniel Moi, Kibaki’s predecessor had deeply entrenched corruption in the country which wrecked the economy to almost collapse.

But today, the economy is worse than it was under Moi with the Jubilee government overseeing the worst job cuts, company closures and distressed livelihoods due to corruption. While the Covid-19 pandemic has also contributed to the declining economic status, its effects could have been mitigated with prudent management of resources in the country.

On this note, the government has just a few months to the end of its mandate and the country is getting politically polarised each passing day. With politicians already on the campaign trail, despite it being illegal since it is outside the campaign periods, citizens are feeling more left out of the government’s development agenda which has worsened poverty levels.

This scenario has made it easy to for those seeking livelihoods to fall prey to politicians who are out to misuse them.

This unease is why the Kenyan election is an agenda. In addition, with President Uhuru Kenyatta expected to step down after completing his disastrous two terms, the US would be keen to be in the front row to understand the next president of the republic. While this is not given, the race for the presidency has begun in earnest. Only time will tell whom the die is cast for since Uhuru is not seeking re-election.

Another agenda is the turmoil in the Horn of Africa.

It is a year since war broke out in Ethiopia pitting the government against the Tigrayans where close to 3 million people have fled their homes already. More than 5 million are in need of urgent humanitarian assistance due to the escalating violence in Tigray.

In the regions neighbouring Tigray, an estimated 1.5 million people are in need of emergency assistance in Afar and Amhara.

The US Secretary of State will also be discussing this region which includes Ethiopia, Somalia and Sudan where is there is civil disquiet.

In addition, the Secretary will advance US-Kenyan cooperation on improving clean energy access and protecting the environment.

Thereafter, Secretary Blinken will travel to Abuja, where he will meet with President Muhammadu Buhari where they will discuss furthering cooperation on global health security, expanding energy access and economic growth and revitalizing democracy.

In Nigeria, Blinken will deliver a speech on US-Africa policy in the capital of Africa’s largest democracy and also engage with Nigerian entrepreneurs in the digital sector.

Meeting with President Macky Sall will see the Secretary conclude his trip to Africa in Dakar where the discussions will be on Sall’s upcoming African Union chairmanship.

Blinken will engage in events that highlight America’s strong commercial relationship with Senegal, amplify the role of female Senegalese entrepreneurs, and showcase the US partnership to combat the Covid-19 pandemic.

In April, Blinken had his first virtual trip to Africa where he visited Kenya and Nigeria to “engage with young people from across the continent”.

A beneficiary of the PEPFAR programme and a Nigerian health care worker was among those Blinken met in Nigeria virtually. He also participated in a health partnership event on combating the pandemic and the long-term US investments in combatting infectious diseases.

In Kenya, Blinken discussed future cooperation to promote democracy and expand trade while also exploring avenues to address global challenges like climate change and the pandemic.

Read:  The future of US, Tanzania relations under Samia

Low, Middle-income countries to benefit from US$150m guarantee for vaccines

DP World partners with Kenyan MSMEs as it expands in Africa