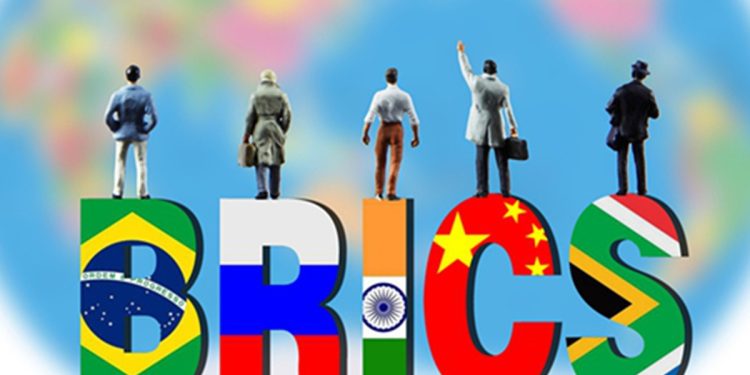 The BRICS nations have enhanced industrial and financial might and are pushing for a seat at the global new power axis table. [Photo/TAZAA]

by James Ndwaru
in Countries
0
Share on FacebookShare on LinkedIn

The current large-scale transition of the global economy, principally triggered by the current conflict between Ukraine and Russia as well as the standoff between China and the United States, creates a multipolar world map with new centres of power.

The current large-scale transition of the global economy, principally triggered by the current conflict between Ukraine and Russia as well as the standoff between China and the United States, creates a multipolar world map with new centres of power.

Brazil, Russia, India, China, and South Africa, also known as the BRICS nations, have enhanced industrial and financial might and are pushing for a seat at the global new power axis table. These nations are essential participants in international markets for products, services, and money, having a considerable, sometimes decisive, effect on how the global economy operates.

However, it would be premature to predict that the members of this economic partnership would be able to reach a balance of power in financial and credit relations with the United States and the European Union. A balance in the future would therefore defeat the long-term dominance of the US and EU in global finance.

Achieving such a balance will be possible only if the BRICS countries’ monetary units become influential reserve assets capable of squeezing the US dollar and euro in servicing global economic relations. It would mean establishing large international financial centres capable of competing on equal terms with other leading global economies.

The partner countries want to take a step further by establishing a currency union, ultimately developing a BRICS single currency. This would be the most complicated way to adopt. However, it would become the most effective since it would leverage the combined capabilities of all BRICS economies.

Each BRICS nation would be required to replace its currency with the BRICS common currency. The BRICS currency would become the official currency of the four BRICS nations and the preferred currency for intra-BRICS commerce.

The BRICS Ministers of Foreign Affairs/International Relations met virtually on May 19, 2022, headed by China. They reaffirmed that the BRICS countries would continue to strengthen the structure of intra-BRICS collaboration under the three pillars. The pillars include security and political, financial and economic, and people-to-people and cultural exchanges for solidarity, accelerating the execution of the 2030 Sustainable Development Agenda, and enhancing and broadening BRICS cooperation.

The Ministers agreed that the BRICS nations would strengthen their solidarity and collaboration to address the fresh challenges and problems. In this respect, they remembered the ratification of the updated Terms of Reference for directing BRICS participation moving forward on its working procedures, the scope of engagement, and the Chair’s mandate by BRICS Sherpas in 2021.

The ministers recognised the tremendous shock and difficulties caused by the COVID-19 outbreak. They recognised the associated uncertainties that would influence the accomplishment of global sustainable development targets. The minister emphasised that the issues may be interrelated. This highlights the need for the world community to work together to create resilience via solidarity and collaboration.

The ministers committed to boosting and improving their multilateral system during the summit. The decision underlines the BRICS Joint Statement on Strengthening and Reforming the Multilateral System issued in 2021 and the principles described therein.

The effort would include making global governance mechanisms more inclusive, representative, and participatory. The modification would allow for larger and more meaningful engagement of developing and least developed nations in Africa. This allows the nations a place in global decision-making processes and institutions and makes Africa more responsive to present circumstances.

The statement also praised African countries, the African Union, and sub-regional organisations for their efforts to address regional challenges such as maintaining peace and security, post-conflict reconstruction, and development efforts, and called for the international community to continue to support them. The ministers stressed the need for AU-UN engagement in conformity with the UN Charter.

The BRICS countries also support the African Union Agenda 2063. Additionally, they support Africa’s aspirations to integrate via the construction of the African Continental Free Trade Area, among other things.

The states have emphasised the significance of issues like industrialisation, infrastructure development, food security, health care, and addressing climate change for Africa’s long-term growth. The pact assists Africa in achieving economic recovery and long-term growth in the post-pandemic age.

Beyond the enormous potential of the African primary sector, the BRICS are drawn to diversification advantages within African economies. Africa offers an opportunity to access a massive and developing market in the middle of a sifting global power axis.

The BRICS nations have amassed substantial reserves over the years, primarily invested in the developed world. The nations are shifting a portion of their assets to other developing destinations to maximise profits. The shift helps minimise risks from the ongoing global financial crisis, which has impacted industrialised countries hard.

As a result, Africa allows the BRICS to expand into new frontier markets. Furthermore, investing in Africa means tapping into a youthful consumer market with a burgeoning middle class.

Due to increased demand from Africa’s middle class, industries such as telecommunications, financial services, and retail have seen rapid expansion in most African nations in recent years. Indeed, Africa must adopt the deliberate strategy the BRICS uses, as it has enormous potential for development and economic integration.

Impact of logistics and supply chain infrastructure development in Africa