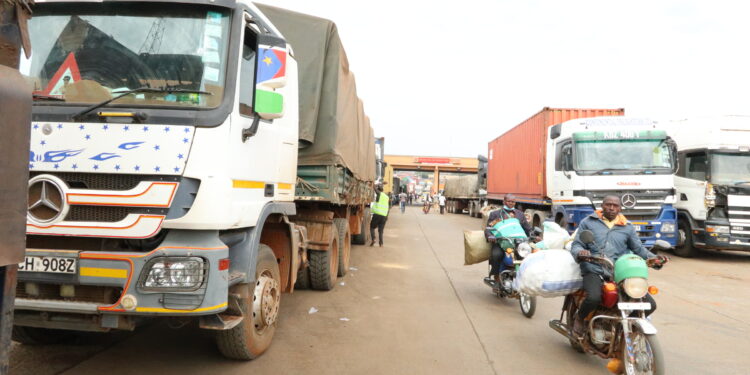 The Malaba OSBP. The EAC has operationalised 13 One Stop Border Posts. [Photo/EABC]

The 240-kilometre road is a key component of the East African Community's (EAC) Regional Roads Network, which spans from southern Tanzania to northern Kenya and then on to Addis Ababa in Ethiopia.

by Njenga Hakeenah
in East Africa, Industry and Trade
0
Share on FacebookShare on LinkedIn

East Africa’s One Stop Border Posts (OSBPs) began as a project by the East African Community (EAC) to give the region a much-needed boost to commercial and tourism activities between Kenya and Tanzania.

By 2018, the entire development saw an increase in trade, tourism which stimulated the regional economy. The project was meant to support the development priorities of the Kenyan and the Tanzanian governments.  The project is in compliance with the African Development Bank (AfDB)’s strategy of promoting economic cooperation and regional integration through multinational infrastructure projects.

The AfDB is a major financier of the project.

Read: EAC’s Export of Textiles and Clothing to be Transformed by AfCFTA Trade Deal

Co-financiers include the Japan Bank for International Cooperation (JBIC) for the infrastructure project which also facilitates traffic between Kenya, Uganda, Tanzania, Zambia and Sudan.

In addition, the 240-kilometre road is a key component of the East African Community’s (EAC) Regional Roads Network, which spans from southern Tanzania to northern Kenya and then on to Addis Ababa in Ethiopia.

All three EAC countries, Kenya, Uganda and Tanzania as well as international funders have worked together to identify six key corridors in the region’s transportation sector.

The EAC OSBP project goal is to promote economic and social development programmes in Kenya and Tanzania, the EAC has been working to strengthen the regional transportation infrastructure. The Arusha-Namanga-Athi River trunk road maintenance and reconstruction were sought by the governments of both nations which led to sourcing funds from the AfDB.

In November 2018, the EAC fully operationalized 13 OSBPs which included training personnel. With this move, the OSBPs have significantly reduced time taken by travellers and trucks at the borders from days to about 1.5 minutes to 30 minutes on average respectively.

The EAC, with the support of TradeMark East Africa (TMEA) worked on completing the Malaba OSBP on the Kenya-Uganda border. The post cost US$7.5 million.

To resolve the problem of lack of information to businesses, Kenya, Uganda, Rwanda and Tanzania have installed Trade Information Portals (TIPs).

These TIPs are also planned for Burundi and South Sudan.

With the OSBPS came the Single Customs Territory (SCT) which has registered remarkable benefits since it was implemented in July 2014.

All imports in the EAC are cleared under the SCT Framework which has significantly reduced time wastage for both the ports and customs.

The SCT involves clearance of selected export goods which go through the Northern Corridor and the Mombasa Port.

Non-Tariff Barriers (NTBs) remain a challenge but these are being addressed by multisector players including the East African Business Council (EABC) and TMEA. Addressing the NTBs will streamline the process of conducting trade in the region.

On January 28, 2022, EABC CEO John Bosco Kalisa called for the full operationalization of the Mutukula OSBP urging for more trade facilitation officials to be deployed to offer 24 hours service on the Uganda side for the seamless flow of cargo between Tanzania and Uganda.

While on the Uganda side, only the immigration department operates 24hrs, all agencies on the Tanzania side offer 24hrs services at the Mutukula OSBP.

During the TMEA Public-Private Dialogue at Mutukula OSBP, Kalisa said that East Africans can’t trade with each other due to NTBs imposed on EAC-originating items. He said NTBs on rice and maize tariffs should be abolished in the EAC Partner States.

A total of US$743.6 million in Tanzanian commodities were exported to Uganda in 2020, according to the International Trade Centre.

Tanzania Chambers of Commerce Industries and Agriculture (TCCIA)’s Joseph Cosmas explained that with planting and harvesting seasons in Uganda and Tanzania being different, vehicles exporting goods to Uganda should not return empty but should instead be bringing back what has been harvested in Tanzania during deficit seasons. Tanzania has placed an import ban on Ugandan maize.

This affects intra-EAC trade’s competitiveness and growth, according to Cosmas.

“The excise tax on rice was increased by Uganda from 6% to 13% causing unpredictability and paralyzing Uganda-Tanzania commerce at Mutukula,” stated Moses Kadera, Chair of Tanzania Freight Forwarders Association (TAFFA).

There is a fear among the East African Chairs that such hurdles may encourage unneeded rivalry and retaliatory limitations.

During the lockdown, families were dispersed and enterprises were shut down as women cross-border traders chose to conduct business on the Tanzanian side owing to the lockdown and the 14-day quarantine requirements on the Ugandan side.

The Mutukula border clears 150-200 trucks of Tanzanian merchandise daily with a one-hour clearance period each vehicle.

Kalisa advocates for the rapid construction of border markets so that cross-border traders can sell their products easily and securely.

Funny Money: Jim Carrey's laughter all the way to the bank | Net worth