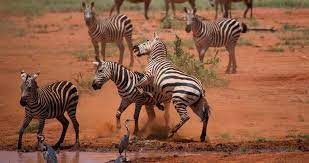 Kenya has strategically managed to tap into the lucrative United Arab Emirates (UAE) tourism market. With less than five hours’ flight time from Dubai to Kenya’s capital Nairobi, the UAE is very well positioned to provide Kenya with much needed tourists to help re-boost the ailing industry.

Notably, tourists and business persons alike, have a wide range of flight options to and from Nairobi all scheduled at convenient times and routes. There is also a score of airlines that provide fast and efficient connectivity and frequency including Kenya’s own Kenya Airways, UAE’s Emirates Airlines (from Dubai), Air Arabia (from Sharjah), and Etihad Airways (from Abu Dhabi).

Marketing Lessons to Learn From Kenya

To help ease travel arrangements further, Kenya has set up an Embassy in Abu Dhabi and a Consulate General office in Dubai which allows travelers to access visas hassle-free. To ease the process even further, Kenya now allows visa processing upon arrival for persons coming to Kenya from the UAE.  Kenya waived visa fees for children under 16 years of age, a move that allowed for increased family travel by UAE tourists.

Another measure taken by Kenya to attract tourists from the UAE was to do away with taxes that were otherwise charged on UAE national carriers arriving into the East African economic powerhouse.

“The UAE and Kenya have also signed a double-taxation avoidance agreement, which included the clause that all the UAE’s national carriers would be exempt from taxes in Kenya,” writes a local Kenyan publication.

Other measures taken by Kenya to lure in tourists from the UAE include the reduction of parking fees which were increasingly becoming a cumbersome deterrent to tourists and businessmen visiting the country.

Speaking to press, Kenya’s Jacinta Nzioka, Director of Marketing at the Kenya Tourism Board, the executive aired long-term plans to start kindling the tourism flame at a tender age by conducting school tours for UAE schools.

“We plan to organise a special familiarisation trip for schools to further expand our reach and explore new areas of inbound tourist traffic from the Middle East,” she told press.

Kenya did not stop there.  East Africa’s largest economy went ahead and started to effectively participate in the Arabian Travel Market where it showcases its tourist attractions and visiting incentives including the tax waivers, visa exemption for children, reduced parking fees and so on, all of which serve to further consolidate Kenya’s position with UAE tourists and business community.

The efforts are clearly paying off with recent reports showing that the number of trips from the UAE to Kenya actually increased by five per cent in just one year. As of 2016, the number of tourists visiting Kenya from the UAE was well over 3.5 million.

Worth noting here is the fact that in  2016, the UAE did not only increase the number of tourists visiting Kenya but also effectively increased trade becoming the fifth largest source market for Kenya globally.

All of Kenya’s efforts to boost tourism is now paying off and not only for the tourism sector but across multiple industries. Earlier this year in May, the UAE announced plans to sign a comprehensive economic partnership agreement with Kenya, promising the East African economic leader lucrative business that will likely keep it ahead of the pack for several more years.

On one hand, the UAE is looking to widen access to emerging markets and Kenya and the rest of the EAC bloc are key target markets. On the other hand, Kenya is welcoming UAE investment in the country and access to the Arab peninsula market as well.

Similarly, the UAE is looking to sign like deals with at least six other countries including India, Indonesia, Turkey, UK, Israel, South Korea and Ethiopia. The deals, once signed will allow the UAE access to these growing markets.

Commenting on just what amount of marketing they are hoping to secure, Dr. Thani bin Ahmed Al Zeyoudi, UAE Minister of State for Foreign Trade in a statement said, “…we are talking about 10 per cent of the global trade and 60 percent of the global populations of those eight countries.”

In this growth of trade, it is anticipated that Dubai, among other things at least double its non-oil trade and investments with Kenya. Previously and maybe owing to oil imports by Kenya from UAE, the relationship between the two countries was largely marked by huge trade imbalances in favour of the UAE.

Worth pointing out here is that this trend has been the case for almost all UAE-Africa dealings which has resulted in Dubai’s non-oil trade with Africa surging by an impressive 71 percent to exceed $50 billion in 2020.

However, with Kenya leveraging on tourism and the UAE increasingly taking a sombre stance towards business with Africa, the trade imbalances are expected to be bridged gradually. Hinting at the fact, Sheikh Mohammed bin Rashid Al Maktoum, vice-president and prime minister of the UAE and Ruler of Dubai singled out Kenya as, “one of the most promising business partners for Dubai in the coming years,” further adding,  “We believe Dubai holds the key to unlocking Kenya’s economic potential.”

These growing ties are a win-win situation for Kenya especially since Dubai is very strategically positioned as both a destination for Kenyan produce as well as a transit station for the larger markets in Asia and Europe.

Cementing all these bilateral achievements will be the upcoming Expo 2020 Dubai where Kenya is expected to participate. Kenya’s participation will give the country an unprecedented platform to attract investors from across the UAE and beyond as well as to woo key stakeholders and open up the UAE market.

The Expo comes at a vital time as all world economies struggle to recover from the devastating effects of the Covid-19 pandemic. Kenya will leverage this opportunity to slingshot its economy post-pandemic, and foster a speedy recovery and possible growth.

A mixed bag of results at the Nairobi Securities Exchange