The Kenyan textiles factory at Chunguni area in Zanzibar is targeting to export to markets across East and Central Africa. 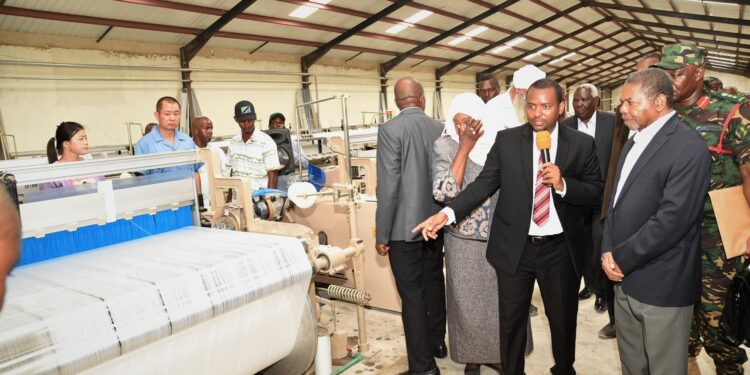 Basra Textiles Limited, a firm based in Kenya, is setting up a $51.3 million (KSh5.7 billion) textiles factory in Zanzibar.

President Samia Hassan Suluhu launched the factory on January 11, 2022. The firm targets to share a piece of the pie in the country’s clothes market.

President Samia hopes that the factory will revive the energy of Tanzania’s textile industry, which can attract foreign buyers to the country.

The market drivers include the rise in consumer awareness, e-commerce platforms to support sales, and the fast-changing fashion trends in the industry.

The CEO of Basra Textiles, Ahmed Othmad, said on January 11 that the factory at Chunguni area in Zanzibar was targeting to export to markets across East and Central Africa.

The market gap spotted by Basra is that Tanzania imports a majority of its textile requirements mainly from China, Pakistan, India, and Korea, among others. However, Tanzania enjoys duty-free market access to the US through the African Growth and Opportunity Act (AGOA) and the European Union.

Tanzania’s locally processed fabrics, Kitenge and Kanga, are consumed locally and exported to Kenya, Rwanda, Malawi, and the Democratic Republic of Congo. The country also exports a few fabrics to China.

The Kenyan Textile company aims to hop on the duty-free market access by the EU and AGOA as it eyes to serve the United States and the European Union markets.

AfCTA has the potential to create a $3.4 trillion economy.

According to African Business, AfCFTA will create the most significant global free trade area by connecting almost a 1.3billion people across 54 African countries.

The signed agreement targets to create a single inclusive market for goods and services to intensify Africa’s economic integration. The trade area could generate a combined GDP of roughly $3.4 trillion.

AfCFTA also facilitates the movement of factors of production (people, capital, and entrepreneurship), creating all African Custom unions and compelling its member states to cut up to 90 percent on tariffs charged on goods traded within the area.

The CEO of Basra Textiles said that the factory has three implementation phases:

Upon its completion by 2024, the company will provide direct employment to 1,600 people.

Mr. Othman said that the firm would produce 250,000 meters of polyester per day, which translates to seven million meters per year.

Basra Textiles will produce Kanga, Kitenges, beddings, and several other textile products. The company targets to sell its products to the US, East African Community, Central Africa, and Europe.

President Samia Suluhu issued a directive to environmentalists to ensure that the textile factory conserves the environment. She advised the factory to make quality a top priority to ease exportation to the United States and other countries.

Basra Textiles will increase the demand for Tanzania’s cotton, benefiting farmers in the long run.

President Magufuli’s successor said that she understood the importance of such projects and that her government would create a conducive environment for investors to bring their capital to Tanzania.

Speaking on the Zanzibar Revolution, she reiterated that the political revolution was over to be replaced by an economic and development evolution, calling upon Zanzibar to join hands to drive to a prosperous economy in the country.

Read: EAC’s Export of Textiles and Clothing to be Transformed by AfCFTA Trade Deal