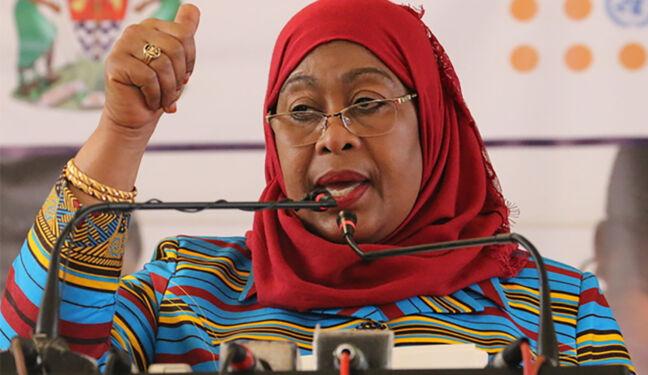 President Samia Suluhu Says her government will focus on empowering its citizens as well as promoting Investment by reversing investment policies, laws, and regulations, that have hampered smooth investments.,

Few months after taking over the Tanzania’s presidency seat following the Death of the fifth President Dr. John Pombe Magufuli, President Samia Suluhu was in parliament to address the Tanzanian Legislators on his development road-map.

During the address President Samia announced his key areas of focus to achieve the grand development plan for Tanzania’s economic transformation in the next five years, emphasizing empowerment and job creation.

“We intend to focus more on economic growth. We will continue the good work achieved during the previous administrations, change where necessary but with a view to promoting efficiency and productivity, guided by the national, regional and party manifestos,” she said

“Last year, our nation managed to enter the middle-income category where the per capita income increased to $1,080 from $1,036. It is a great achievement, but more effort is needed to accelerate the economy,” she added

Samia Suluhu says that in her next five years in office her government will focus on putting up more investments into productive sectors as well as create more job opportunities to the Tanzania’s Population.

She said the focus will be on a mission to restore investor confidence, giving room for strategic investors, attract more participation from the private sector in economic activities and facilitate investment.

“The government will be taking specific steps to promote investment by looking into investment policies, laws, and regulations, remove clauses that are hampering smooth investments, including unpredictable policies, an unstable tax system and unnecessary bureaucracies,” she stressed

She will continue to improve macroeconomic and monetary policies and ensure economic indicators including currency value, inflation, and interest rates remain stable.

“There will never be room for malpractice. We will not tolerate laxity, theft, negligence and misappropriation of public funds,” the head of state warned.

According to Samia livestock and fisheries sector employs over 65 per cent of Tanzanians although its contributions GDP is less than 30 per cent.

“It is a dream if we expect to develop the country without taking needed measures to improve the sector that occupies the most population in the country,” she said.

“Livestock alone contributes about 7.4 per cent to the GDP. In the next five years, we will abandon Pastoralism and focus on promoting modern animal husbandry. We will focus on livestock production through inter-breeding to enable pastoralists have fewer livestock but bigger production capabilities,” she said.

On fisheries department, President Suluhu said the focus will be on strengthening the management of sea fishing so that Tanzania can benefit from its resources.

“We intend to build a port for fishing vessels in the coastal zone and begin the allocation of fishing vessels, issuance of fishing permits in the high seas, and investment in quality fishing equipment as well as the establishment of processing plants for fish and other marine products.”

Tanzania seeks to increase high-speed communications (broadband) from 45 per cent to 80 per cent by 2025 and improve access to telecommunications nationwide.

The president pledged to strengthen the mining sector, which is currently providing about 1.5 million jobs, with the government seeking joint ventures with global mining companies.

“Emphasis will be placed on the quality and effectiveness. We continue making the environment conducive for small miners, provide them with relevant training, loans as well as equipment,” she said.

“With these steps I believe, the sector will be able to achieve the target of 10 percent contribution to GDP by 2025,” she added

On the same line, President Samia said negotiations between the Tanzania and international oil and gas companies of the long-stalled liquefied natural gas (LNG) project should be put to an end.

“It has been six years since we started singing the LNG song, the long wait is over actual construction should start soon,” she said

Not long ago in their joint letter to the media, Royal Dutch Shell and Norwegian Equinor pledged the government of Tanzania to take immediate action to conclude talks on the country’s long-stalled LNG project, citing limited time to develop new gas resource

“Timing is critical in terms of the project’s success. A mega project like this takes years to plan, design and execute and hence critical decisions are required now in order to supply the Tanzanian industries of the future with energy.

Talks on the host government agreement (HGA) were halted ion 2019 pending the country’s Public Agreement Production sharing agreement (PSA) review procedures that are yet to be revealed of its progress.

Rwanda And Seychelles To Develop New Areas Of Co-operation