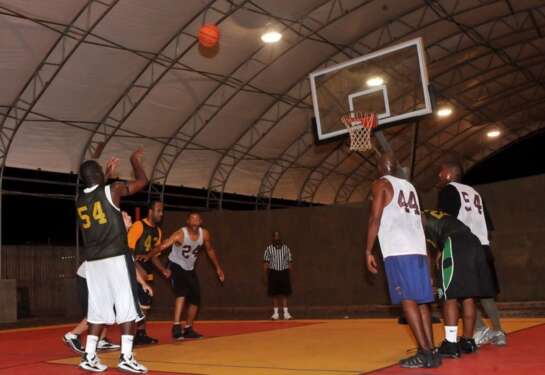 A basketball training session. Sports is one overlooked business aspect in Africa. [Photo/MentalItch]

Sports and entertainment have a unique way of bringing people together

With the start of trading under the African Continental Free Trade Area (AfCFTA) agreement on January 1, 2021, the continent turned a historic page towards modernising Africa’s economy.

With 34 African countries having created the largest free trade zone in the world by country participation, it is still too early to gauge how the AfCFTA will affect the different facets of the economy including sports and entertainment.

The AfCFTA is the beginning of what many hope will form a workable framework for a modern African economy, at the very least.

An African economy allowing free movement of labour and goods within member States, which is the ideal of the AfCFTA, is a drastic change from the current silo economic structures which have stymied trade growth dimming hopes to foster intra-African trade, industrialization and self-reliance.

Some countries have seen their economies grow faster with trade agreements such as the AfCFTA with Europe being a god example where economic co-dependency or cooperation has worked well until the United Kingdom decided to leave the European Union (EU).

While the AfCFTA is seen as a panacea to the trade challenges which have plagued Africa for decades, Brexit shows that the goal of integration is not without challenges.

The EU has seen Europe try to achieve economic co-dependency and cooperation at the regional or supranational level.

It is clear that the same rules of a shared currency, open borders and the full economic integration of the states play a large and important role in the growth, stability and development of the US. There are similar associations in Asia – the Association of Southeast Asian Nations (ASEAN); and in the Arab region – the Council of Arab Economic Unity (CAEU) with common trade goals which help them better together economically.

The AfCFTA comes at a time when the African economic communities like ECOWAS, SADC, EAC and others, have failed to substantially integrate their disparate national economies. With harmonised trade blocs, the different countries forming blocs would have served to protect the region from exploitation by its neighbours to the east and the west.

For decades, Africa has championed regional economic integration but it has never been at the level and scale of the AfCFTA. These economic blocs have not been as successful as in other world regions.

Sports and entertainment have a unique way of bringing people together regardless of physical and psychological borders. With consumer population projections showing that the continent will have a combined consumer and business spending projection of US$6.7 trillion by 2030, there is not a better time for Africans to look inwards for solutions to the continent’s economic woes than now.

According to the Centurion Law Group, sports, media and entertainment remain the main space where the continent continues to show promise. Of late, African content is competing favourably on the radio and streaming networks on a global scale which could spur key investments from media giants like Disney and Netflix.

Last year, acclaimed Nigerian producer Mo Abudu entered into a multi-title partnership with Netflix to create two Netflix Original series and multiple Netflix branded films as well as a series that has been licensed to the service.

In the partnership, there are on-screen adaptations of literary works by Nigerian authors Lola Shoneyin and Wole Soyinka.

In addition, Africa is a major contributor in the world sports industry, particularly in consumption and talent exportation.

With the AfCFTA, the discussion must now focus on how intra-African collaboration can be best employed to secure these industries’ futures.

The AfCFTA is best placed for the developing of local industrialisation, production and distribution infrastructures for the consumption of sports, media and entertainment.

To unlock the potential of all industries, Africa must first fix its infrastructure deficit which is relevant for all sectors. African countries must aim to localize production and distribution processes as much as possible to control a larger part of the African market.

The music industry now is primarily dominated by streaming consumers. The service has gone beyond music and there is an increased movie streaming with platforms like Netflix and Amazon TV leading the pack in the film industry which is leaning towards this model.

It is time for Africa to develop African digital infrastructures to leverage on the continent’s population resource in industries like music and film. The Centurion Law Group notes that this is the time for Africa to create its own entertainment giants.

In the sports arena, rather than constantly exporting our best talents, local investment in sports like football, for example, can provide the required infrastructure to ensure that African athletes can thrive right here on the continent.

This will serve to effectively reduce talent flight, a major challenge in the industry today. It could eventually place African leagues at par with the popular European leagues where so many players of African descent consistently perform excellently.

With this in mind, the African Development Bank President Akinwumi A. Adesina says that the continent remains fertile ground for investment. However, this is hinged on the continent’s ability to boost its healthcare sector.

Adesina adds that Africa still possesses the same fundamentals that had driven the continent’s phenomenal growth over the past decade and still offers ample opportunities buoyed by the AfCFTA and the young and rapidly urbanizing population.

Africa is still leading in terms of ease of doing business and the digital explosion is another aspect which is making Africa attractive to investors.

The continent’s creative industries are breaking out producing movies, music and fashion with the likes of Netflix turning to Africa to meet the growing global demand for African originated and produced content.

While many investments have been in other sectors like finance and real estate, sports as a business has been overlooked.

To capture this sector, the NBA has been expanding across the continent where it announced the launch of the Basketball African League (BAL) in 2019.

Africa’s middle-class is estimated to reach 1.1 billion with 690 million smartphones in Sub-Saharan Africa by 2050. With these many people to watch future games, the AfCFTA can only become a catalyst to make the projections a reality.

Read: Have governments stolen Africa’s future from the youth?