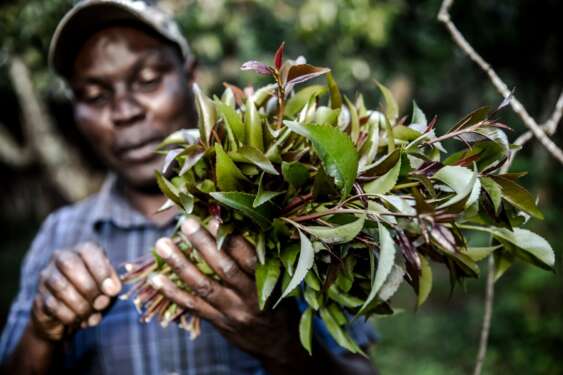 A farmer holds a bunch of khat (miraa). For Kenya, the diplomatic row with Somalia will affect its miraa business which has already been suffering for a while now. [Photo/ Washington Post]

Kenyan diplomats in Somalia to leave the country within seven days

This was just the curtain-raiser for the events that have unfolded fast over the course of less than a month.

On December 7, Somalia’s immigration and citizenship authority said that Kenyan nationals travelling to Somalia would need to obtain visas before arriving in the country. This came after a change announced in the Somali language and broadcast by several outlets in Somalia.

In the announcement, diplomatic passport holders must obtain prior approval from Somalia’s foreign affairs ministry with the directive taking effect on December 13.

On December 15, Somalia went all out cutting diplomatic ties with Kenya over what the country said was Kenya’s interference and trying to ‘infringe upon the sovereignty, territorial integrity, political independence and unity of Somalia’.

The latest in the fast-escalating diplomatic spat between the two East African neighbours was made public by the country’s Information Minister Osman Dubbe.

In a televised speech late on Monday, December 14, Dubbe announced the government’s decision ordering all its diplomats in Kenya to return while also ordering all Kenyan diplomats in Somalia to leave the country within seven days.

Kenya and Somaliland say they are keen to broaden trade in goods and services even though they do not have a diplomatic presence in each other’s territories.

The Kenyan Foreign Affairs Ministry said on Sunday that Kenya has no diplomatic presence in Somaliland but it takes cognizance of the political and economic stability of the region and is keen to enhance and broaden trade in goods and services, as well as, investment as the cornerstone for long-term development cooperation with the region.

Dubbe accused the current leadership in Kenya of working on dividing the two nations who share common interests.

Despite the diplomatic tiffs, Kenya and Somalia have one common enemy in the al-shabaab and their fallout could strengthen the foe to their detriment.

For starters, Kenya and Somalia share a 682 km border which has remained a sore thumb for both in dealing with the ragtag militia. In addition, the two countries have for years been engaged in a maritime dispute currently being adjudicated at the International Court of Justice (ICJ) at The Hague.

With the ousting of dictator Said Barre, in 2012, Somalia elected a new president, Hassan Sheikh Mohamoud.

The country also managed to chase the al-shabaab militia out of Mogadishu, Somalia’s capital leading to the capital experiencing a real housing boom. For the first time, property prices rose in over 20 years.

Across the border, Somalis who fled the violence found a new home in Kenya’s capital, Nairobi with the city’s Eastleigh suburb becoming a “Little Mogadishu”.

Kenya’s Little Mogadishu is almost entirely inhabited by Somali immigrants and has become the economic hub for Somali business.

So successful has been the growth of the suburb and the development of Somali-owned businesses that think tank Chatham House published a paper describing the transformation.

Unlike in Somalia where the economy broke down in the early 90s, the economic activities were exported to Kenya.

The most notable thing is that Eastleigh’s economic transformation brought a new level of competition which substantially reduced the cost of goods and services in Nairobi. From a congested and run-down suburb, the growing Somali investments attracted banks and other service-providers bringing a turnaround to the hitherto limited business ecosystem.

But with the new onslaught, how will these businesses fair? Will Kenyans become xenophobic against the Somali community or will the cloud pass just like it did with the al-shabaab?

For perspective on xenophobia in Kenya, it is not pronounced against any community but it is usually hinted. Kenyans rarely segregate on the basis of race and this event may even go unnoticed. However, if it blows out, Kenyans who are the biggest source of business for the Somali community may just turn the heat on these businesses by withholding their cash. But until it happens, the only thing that is real now is the assumption.

For Kenya, the diplomatic issue will affect its miraa (khat) business which has already been suffering for a while now.

In August this year, Kenya’s Foreign Affairs ministry said it would deal with the stalemate between Kenya and Somalia over the importation of the crop from Nairobi.

Then, Somalia was demanding government-to-government talks over the crop after snubbing an Agriculture and Food Authority (AFA) delegation that sought to iron out the issues affecting the trade.

At the time, Agriculture chief administrative secretary Anne Nyagah was quoted by Business Daily saying that the miraa deadlock would be handled by the department of external relations and trade under the Ministry of Foreign Affairs.

With Somalia having already banned Kenyan flights citing Covid-19, it means that the country cannot export its khat hurting Kenyan farmers whose livelihoods are dependent on the trade.

Ironically, though, Ethiopia’s khat is still being exported to Somalia.

Somalia banned international flights in March, including Khat cargo planes. Kenya is among those feeling the heat from the ban since not much trading is happening with the escalating tensions.

Somalia’s presidential election will take place on February 8, 2021. Already, parliamentary elections are being held from December 1 to December 27 this year.

The announcement on the elections dates followed an agreement between President Farmaajo and the federal state leaders to retain the clan-based system of delegate voting in the elections.

Somalia had in July this year announced the postponement of its parliamentary elections until February 2021 and presidential elections until August next year. This was due to what the government said were security and technical issues.

But it seems like the issues have been addressed with the parliamentary elections already on course.

What remains uncertain now is the future of the relationship between Kenya and Somalia who seem to be warring at every turn.

In addition, the tumult between the two countries threatens any future conglomeration of the region’s states to form an economic bloc. Just like with Tanzania, it may just be that Somalia is what Kenya needs to buffer its economic stance.