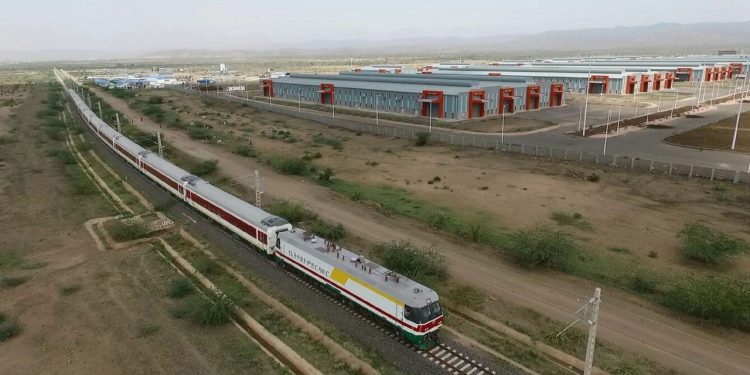 A railway line in Ethiopia. China's US$200 million textile plant in Ethiopia sprawls across some 51 hectares of land.

A railway line in Ethiopia. China's US$200 million textile plant in Ethiopia sprawls across some 51 hectares of land.

Over 3,500 Ethiopians will be employed in a textile factory to be built by China in the country’s small town of Dire Dawa.

The number is expected to almost double over all three phases of the construction; so far only phase one is complete.

China is infamous for setting up cheap labour production lines with very poor working conditions to produce knock-offs (or originals in some cases) of the world’s top renowned brands.

Usually, these production plants are exclusively for export, and they are set up specifically to produce under extremely cheap labour, usually with workers living onsite sharing dormitories or some other form of sleeping quarters.

This begs the question: is China taking advantage of Africa’s quest for industrialization by setting up cheap labour production plants?

Let us take the Ethiopian textile plant as an example. According to the Chinese management of the plant, as quoted by China’s global news outlet Xinhua, the textile plant is exclusively for export and corroborated by a top manager of the plant.

To quote the media report it said it will export, “…100 per cent of its products to the international market, mainly Europe, North America and Asia, as well as other markets.”

Worth noting here is that Africa, including Ethiopia and most of its East African neighbours, are squirming in shipments of second-hand clothing, interestingly, imported from Europe, North America and other western countries.

What better defines neo-colonialism than Africa producing clothes to be exported to Europe and North America only for these very clothes to be sold back to Africa after they have been used! This sounds worse than the renowned exploitative colonial and post-colonial trade agreements (that still hold true and strong) where Africa, using cheap labour, produces raw material, which is cheaply exported to Europe, processed, packaged and sold back to Africa!

Several East African countries have attempted to honour up and ban the import of second-hand clothes. As you can imagine, the attempt failed.

US exporters of used clothes cried foul and trade agreements like AGOA were brought to the table and East Africa was reminded that it is its duty to buy used clothes if it is to enjoy US aid!

Valued at well over US$200 million the textile plant in Ethiopia sprawls across some 51 hectares of land.  With such massive capacity, the plant is capable of clothing most of Ethiopia and all the neighbouring countries with spanking, brand new outfits, maybe even designed by African designers and sporting African brands.

But no, it is exclusively for export. It is strategically built next to a standard gauge railway line, East Africa’s first high-speed electric train that is now to be used to ship the textile plant’s output ready for export.

This development comes on the heels of energy supply projects funded by China including hydroelectric dams and set-up of electrical transmission lines among other infrastructure projects valued at millions of dollars.

So there is no power to run the textile plant, railway to transport the products and contracts to seal the export pact. The only thing that remains to be seen is the working conditions at the plant and the payment value to the workers.

On a brighter note, most African countries welcome Chinese funded projects with open arms and most countries testify to the great value they are enjoying from the projects. So it may just be a myth, conjured up by the pains of a dark history that refuses to stay buried in its shallow grave—a history of cheap labour and poor working conditions enforced upon poor communities.

Is it just me or do you, dear readers, get the irony of it all?

US Extends Technology Restrictions to the Russian Oil Industry