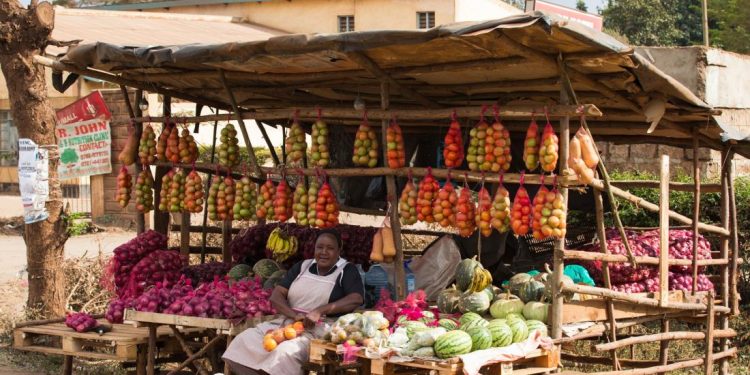 China is much more integrated into the global economy than it was in 2003, and coronavirus in the country has affected many companies with China’s Manufacturing Purchasing Manager’s Index (PMI), a critical production index, falling by about 22 points in February and bringing Africa closer to economic turmoil

Anastacia Mukami sells fruits and vegetables at the Kiambu town market, a few kilometers north of Nairobi, Kenya’s capital. Within a month, the price of cloves of garlic has almost doubled, currently selling at 35 shillings up from 15 shillings. This, she says has led to a reduction in the number of cloves she sells in a day as the supply from China becomes more scarce.

Just like the rest of the world, Kenya is reliant on garlic shipped from China, and with the Asian giant facing near lockdown, the supply to traders like Mukami is dwindling and the economic effects of goods from China is starting to be felt across the African continent. The Directorate of Horticulture says that Kenya imports over 50 percent of garlic from China, and some more from Tanzania.

It is not just garlic sellers that are facing a bleak and uncertain future. The eastern part of Nairobi is filled with large scale shops of goods shipped from China, from where they find their way in almost every urban center in Kenya and sometimes across the border into Tanzania, Uganda, and Rwanda.

From shoes, cosmetics, motor vehicle spare parts, items of clothing, mobile phones and diapers, the products have become the backbone of economies across the continent. However, the flow of traders to Chinese cities in search of these commodities have been curtailed as China has remained the epicenter of Covid-19, popularly known as Coronavirus.

With the Asian country being an important cog in the wheels of production worldwide, the outbreak of coronavirus in Wuhan has affected many companies with China’s Manufacturing Purchasing Manager’s Index (PMI), a critical production index, falling by about 22 points in February.

According to UNCTAD, this index is highly correlated with exports and such a decline implies a reduction in exports of about 2 percent on an annualized basis.

Wuhan, the epicenter for the coronavirus outbreak, has a population of over 11 million people, and around 60 international flights to over a dozen countries normally depart the city’s airport each week. While travel restrictions have recently been put in place, risks of further international spread persist, and the reach and severity of the situation may not be known for another few weeks.

Franklin Templeton Investments is one of the world’s largest asset managers notes that China is much more integrated into the global economy than it was in 2003, and the number of Chinese nationals traveling all over the world has doubled over the same period, which raises the risks to the global economy and health.

The Kenya National Bureau of Statistics notes that Chinese exports to Kenya have been on a steady rise standing at 3.8 billion dollars in 2018, up from 1.6 billion dollars a decade ago. The rise of Chinese products has been followed by Chinese traders who have now engaged in direct trade in Kenya.

It is not just Kenya that is heavily dependent on these products from China. All over Africa, the Chinese economy has been integrated with most of the economies with sectors ranging from construction, mining, aviation, and tourism.

Read also: Coronavirus and the Implications for Emerging Markets

In 2019, China’s trade with Africa grew with China’s exports rising 7.9 percent to US$113.2 billion, while imports from Africa fell by 3.8 percent in the period to US$95.5 billion. Nigeria is by far the biggest importer of Chinese products in Africa with the Nigerian National Bureau of Statistics (NBS) showing that Nigeria’s imports from China hit N1.9 trillion in the first half of 2019.  Other major destination of Chinese goods includes Ethiopia, Angola, Tanzania, and now Kenya.

It is not only China that is affecting Africa’s and in a larger extent global economy. For example, Kenya’s new minister of health Mutahi Kagwe announced the restriction of conferences and large international meetings as Kenya desperately tries to get into the statistics of countries reporting new infections of Coronavirus.

Flights from Italy, to the coastal resort city of Malindi, famous for its Italian tourists and businesses have been put on high alert as infections in Italy hit a worrying level. It is estimated that about 70 percent of tourists who visit Malindi are Italians and the travel restrictions are going to hit the town with expected job losses.

International Air Transport Association (IATA), the global association of airlines has issued a warning that Africa stands to lose over $40 million in revenue in 2020 as cancellations affect a zone that has little to show off compared to other global markets.

The travel industry will have a direct impact on Africa’s tourism sector as well as conferencing opportunities. Rwanda has been apprehensive as it prepares to host the 26th Commonwealth Heads of Government Meeting (CHOGM) in June over fears that the meeting could be called off in the event the contamination spread widely. This would be a big blow to the country that has invested heavily in local manpower.

Apart from the tragic human consequences of the COVID-19 coronavirus epidemic, the economic uncertainty it has sparked will likely cost the global economy $1 trillion in 2020, UNCTAD has noted.

“We envisage a slowdown in the global economy to under two percent for this year, and that will probably cost in the order of $1 trillion, compared with what people were forecasting back in September,” said Richard Kozul-Wright, Director, Division on Globalization and Development Strategies at UNCTAD.

UCTAD particularly is concerned about African economies which are categorized as net importers of basic products. Currently, external imports from outside of Africa account for more than half the total volume of imports to African countries, with the most important suppliers being Europe (35%) China (16%) and the rest of Asia including India (14%).