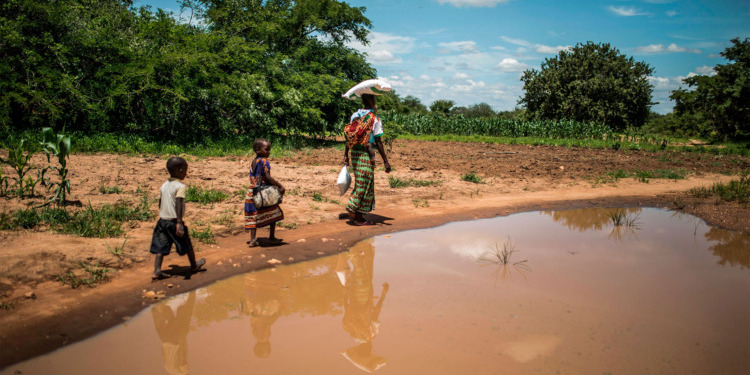 Loveness Haneumba (R) and her children walk back home after collecting food from a distribution organized by the World Food Programme (WFP) and World Vision in Simumbwe, on January 22, 2020. - Funding is desperately needed to meet the needs of the 2.3 million severely food insecure people in Zambia. (Photo by Guillem Sartorio / AFP) (Photo by GUILLEM SARTORIO/AFP via Getty Images)

Climate change pose a considerable risk to the Africa’s US$2.6 trillion GDP, and possibly could be reduced by up to three per cent by 2050.

Climate change is choking the life out of African economies. It threatens the lives and livelihoods of over 100 million people in extreme poverty while posing other auxiliary threats devastating to the continent, such as interregional conflicts over natural resources.

As much as the region places its undying efforts towards economic resiliency, the global collective efforts towards climate action are of paramount importance and are needed now.

According to a 2021 publication by Foreign Policy Research Institute (FPRI), climate change threats pose a considerable risk to the continent’s $2.6 trillion GDP, as the report argued it could be reduced by up to three per cent by 2050.

READ: CDC Group to invest over US$4 billion to combat climate emergency in Africa, Asia

The COP26 closes this year’s chapter by finalizing vital issues that parties stalled for, such as carbon markets and transparency. Adaptation, mitigation and finance are yet being achieved whole as desired by all parties.

According to a recent DW publication, the discussion for financing Africa’s funding is getting serious attention at the COP26, as climate action funding towards the region has never been severe, considering the present danger it faces.

Further on that context, wealthy nations have already placed their pledge more than a decade ago to pay $100 billion a year by 2020 to help developing countries cut their emissions and reduce the already experienced impacts of climate change.

“At the COP26 climate summit taking place in Glasgow, African negotiators want this financing for climate mitigation and adaptation to be scaled up to $1.3 trillion per year by 2030”, the DW report noted.

Despite the lofty pledges, commitment towards climate action ought to enforce with or without the $100 billion obligations.

Individual countries across the continent are doing their best to finance nationally determined contributions (NDC’s). Still, it takes more than money to make it happen, “we need a revolution in knowledge, proper planning and finances”, Anthony Nyong, Africa Director of the Global Center on Adaptation said, along the sidelines of the COP26 event in Glasgow.

When it comes to numbers, the region can start to see promising leads, which also pose an essential question: how can Africa carve out its fair share from the good numbers?

New climate economy shows that decisive climate action could deliver at least $26 trillion in global economic benefits between now and 2030. According to US-based think-tank Brookings, it could also generate over 65 million new low-carbon jobs by 2030.

Following this context, African startups are now taking climate action to the next level, as various technologies towards solar energy, cooling systems, irrigation and recycling are now taken seriously by young people, drawing in jobless youth out from the streets through job creation in these technologies.

However, the region is still vulnerable to climate extremes as not every country can afford to set up robust resiliency mechanisms.

“Devastating cyclones affected three million people in Mozambique, Malawi, and Zimbabwe in the spring of 2018. GDP exposure in African nations vulnerable to extreme climate patterns is projected to grow from $895 billion in 2018 to about $1.4 trillion in 2023—nearly half of the continent’s GDP,” the Brookings report noted. 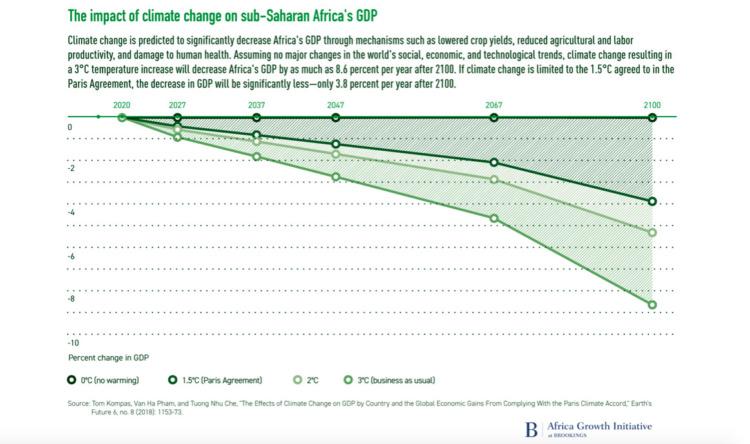 The Green Climate Fund (GCF), the world’s largest climate finance fund dedicated to supporting developing countries to mitigate and adapt to climate change, has set up at least $3.7 billion for Africa.

GCF is an essential partner towards Africa’s climate action. It is one of the most potent multilateral financing mechanisms available for the continent in supporting genuine-time climate action efforts.

Despite the underlying challenges within climate finance the region faces, it ought to be ready to harness GCF’s potential and become resilient as climate change impacts do not wait.

It is an essential task for the region to learn how it can circumnavigate various stumbling blocks that limit Africa’s access to funds.

World Resource Institute’s working paper argues that GCF’s accreditation system which mandates vetted entities to apply for climate funding, has become a stumbling block as it thwarts efforts by African countries for accreditation and hence eligibility to access funding.

For instance, South Africa, one of Africa’s top economies and polluters has only two certified entities which can directly apply to GCF climate funding (DW).

According to information from DW, climate funding through GCF creates impediments for Africans, “…with limited expertise, less developed African nations struggle with the 67-page accreditation form. It requires a wide range of standards, including fiduciary compliance and anti-money laundering structures to environmental, social and gender policies and complaint mechanisms”.

In order to circumnavigate this block, it is vital for GCF to help the region build institutions, strengthen the governance of climate finance in African countries by enhancing climate action stakeholders’ and institutional capacity so that they may seek funding directly and not through a third party.

Only 14 countries have accredited entities, including Ghana, Senegal, Kenya, Namibia and the Ivory Coast.

There is a need for African governments, stakeholders and think tanks to start pushing forward beyond the convectional structures to bring more accreditation to the table and access these critical funds.

It is unfair for a region with the seven most vulnerable countries to climate change (Mozambique, Malawi, the Democratic Republic of Congo, Zimbabwe, Ghana, Madagascar, and Burundi) to have to struggle to access climate funding.

The time is now for Africa to enhance its self-financing efforts toward climate action and improve its chances towards mitigation and resilience.