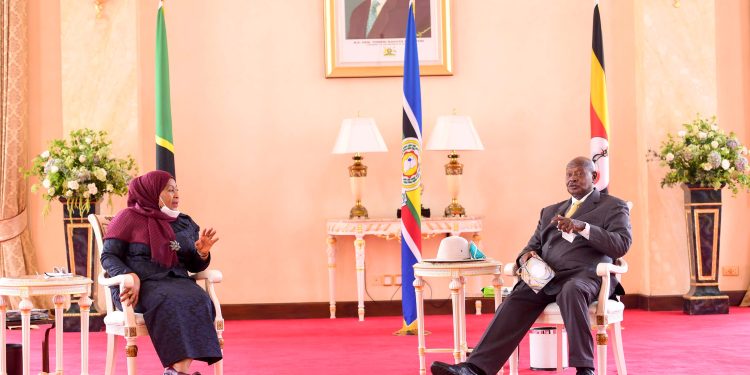 Key Highlights being 71% reduction of Road toll, and Resumption of sugar imports from Uganda

Tanzania and Uganda’s bilateral trade relations have been chilled for a number of years now due to what Uganda says is Tanzania’s heavy-handedness in trade regulations.

Over the course of several years, Uganda has maintained that Tanzania is to fault for imposing a number of non-tariff barriers that have impeded the free flow of trade between the two nations. These include limitations placed on the travel of Ugandan vehicles as well as limits on sugar and milk.

These were on the agenda as Tanzanian President Samia Suluhu Hassan visited Uganda to enhance Tanzania and Uganda bilateral trade relations during a two-day visit, from May 10-11, 2022.

As part of the agreement that was struck between Tanzania and Uganda during the meeting of the leaders of both countries, Tanzania has announced plans to reduce the road toll that is charged to cargo trucks travelling to Uganda by around 71 per cent; this will commence next financial; year2022/2023.

Since mid-last year, the government of Tanzanian had charged Ugandan cargo vehicles a total toll of US$500 in road maintenance and repair costs. The new toll of US$10 per 100kms translates into about US$144 (Shs512,377) – for the whole 1,485km distance, down from the current total toll of about US$500 (Shs1,779,087) for the same distance the Tanzania government had slapped on Ugandan cargo trucks mid-last year as fees collected for road repairs and maintenance.

According to sources inside the diplomatic community, the projected tax of US$144 will be levied at the same rate throughout the entire Common Market for Eastern and Southern Africa (Comesa) regional bloc. The private sector, and in particular the participants in the logistics industry, who considered the levy as a barrier to commerce in the region, is receiving a significant amount of relief as a result of the reduction in the charge.

The two nations came to an agreement on the terms of the partnership during Her Excellency President Samia Suluhu Hassan’s official visit to Uganda, which lasted for two days. The necessary tax helps cover the costs of repairing and maintaining the roads that are often travelled by trucks, with the goal of promoting the safety of those who use the roadways.

According to a joint declaration that was published by the presidency of Tanzania, Tanzania has asked the relevant ministry to find cordial resolutions to the current non-tariff obstacles and allow for the unimpeded flow of trade between the two nations. They feel that by doing this, the potential for trade between Uganda and Tanzania would be realised, which will ultimately benefit the entire area.

They also praised the reopening of the Mwanza-port Bell-Kampala route, which is now operating. This route has significantly cut the amount of time it takes to go from Dar to Kampala from nine to four days, which has resulted in a reduction in the cost of conducting business. The port of Dar es Salaam in Tanzania acts as a gateway to Tanzania’s landlocked EAC neighbours, including the Republics of Rwanda, Uganda, Burundi, and the Democratic Republic of the Congo, all of which have just recently become members of the EAC.

Recent statistics from the Bank of Uganda showed that Tanzania was Uganda’s biggest source of imports in the region, valued at US$149 million, overtaking Kenya, which hauled in a paltry US$71 million. The warm and cordial historical bilateral relations between Uganda and Tanzania states date back to the 1960s.

In addition, the two leaders were present for the signing of two memorandums of understanding (MoUs), one of which was on the topic of the Development of the 400KV Masaka-Mutukula-Kyaka-Nyakanazi-Mwanza electricity transmission line and the other was on the topic of Defence and Security Cooperation.

A separate Memorandum of Understanding (MOU) was signed between the two governments one week ago to ensure the safety of the proposed 1,443-kilometer East African Crude Oil Pipeline (EACOP). This pipeline is intended to carry Uganda’s crude oil from oil fields located in the middle-western region of the country via Tanzania’s Indian Ocean Tanga Port to the international market.

“We’re delighted because of the relative political calm that prevails inside our nation e, and we talked peace and security so that the entirety of East Africa continues to be secure,” said President Hassan. “We’re also satisfied with the economic stability that our country enjoys.”

In November of 2017, Uganda’s President Yoweri Museveni paid a state visit to Tanzania, where he stayed for three days, and complimented his Tanzanian counterpart for doing the same. “We are delighted to have you visit Uganda. We are overjoyed to have President Suluhu with us today, and we are impressed by the calibre of the delegation she has brought.

Tanzania to Import Sugar from Uganda

The easing of one of the trade disputes that has been going on for close to three years is signalled by Tanzania’s decision to begin purchasing sugar from Uganda. This is after Tanzania placed a restriction on the importation of sugar from Uganda in 2019, citing the fact that the sugar had been sourced from other nations. This was one of the contributors to deteriorating Tanzania and Uganda bilateral trade relations.

According to a joint communiqué issued after a meeting between the two countries’ presidents on Tuesday evening, Uganda has agreed to supply Tanzania with 10,000 tonnes of sugar to make up for lost output. This will go a long way in Tanzania and Uganda, enhancing Trade and bilateral relations.