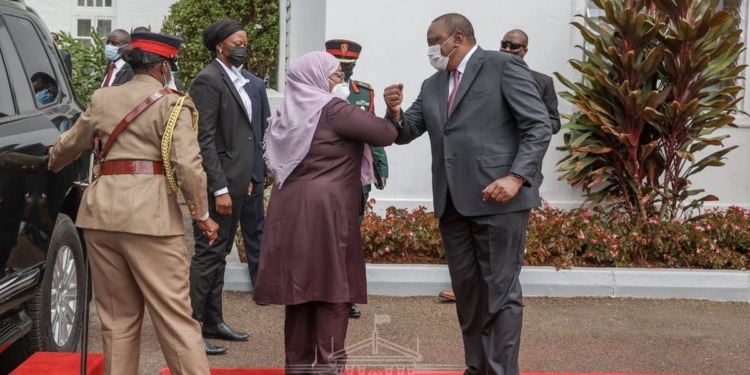 In what has been christened her first official state visit, Tanzania President Samia Suluhu Hassan has today begun her two day visit to neighbouring Kenya.

The visit is considered her first state visit and not her recent trip to Uganda, which was more of a ‘business trip’, meant to but sign the multi-billion-dollar oil pipeline deal and not a diplomatic visit to discuss diplomatic relations and economics.

The highly anticipated visit is expected to strengthen diplomatic ties as well as iron out economic creases that the two countries had wrangled themselves in over the course of the past few years.

The trip comes as a fulfillment of President Samia’s pledge to parliament that her administration will without fail ‘restore and improve economic diplomacy with partners in the region and across the world.’

The visit is also seen as part of the president’s move to attract investors, a goal that needs mutual relations with its neighbours, especially economic power houses like Kenya.

Local media quoted her excellency issuing clear diplomacy instructions to Tanzania’s ambassadors; “Our diplomatic staff have to be competent in striking deals in investment and trade promotion as well as seek strategic partners in tourism”, she said.

Statisticians suggest that trade between Tanzania and Kenya has significantly dropped owing to tariff wars and Covid-19 forced border closure. It is estimated that trade between the two countries dropped to a mere USD17000 (Sh40m) having plummeted from the highs of USD 28 million (Sh64Bn) enjoyed in the fourth Administration.

Tanzania’s President Samia is been hosted by her Kenyan counterpart Uhuru Kenyatta and is expected to address the combined houses of Kenyan Parliament.

However before she does that, her and Kenya’s president Kenaytta will first address business issues and ore specifically, tariff’s at their borders.

“We are looking at resolving these issues without noise. More importantly, we are looking at working more closely to integrate our people and relate through institutions we have created,” local media quoted a Kenyan diplomat ahead of President Samia’s visit.

“Tanzania and Kenya need each other forever but we are not saying there won’t be problems. We are working hard to create an environment where those issues can be sorted out normally,” said the source.

The elephant in the room includes the issue of confiscated Kenyan cattle that were found grazing illegally in Tanzania back in 2017 , the burning of day-old chicks from Kenya, blockage of dairy and confectionery products to mention but a few creases in the fabric of good relations between the tow East African economies.

Then there is the matter of Work permits , which over the years has proved to be a bitter pill to swallow. On one hand you have Tanzania saying Kenyan’s are taking their jobs and on the other you have Kenya saying, well that is the meaning of our East African Community, not to mention the rules of demand and supply.

However, since President Samia has already called for a review of work permit fees among other regulations is seen as a step in the right direction.

Notably, some 529 Kenyan companies have invested in Tanzania and together employ more than 56,000 people. The number of Kenyan’s working in Tanzania is also significantly high. In fact so high that Tanzania overtook South Africa to become Kenya’s leading source of remittances within the continent.