Authorities in Harare have been shaken by deepening economic volatility, and rising poverty levels.

by Kuda Pfende
in Industry and Trade
0 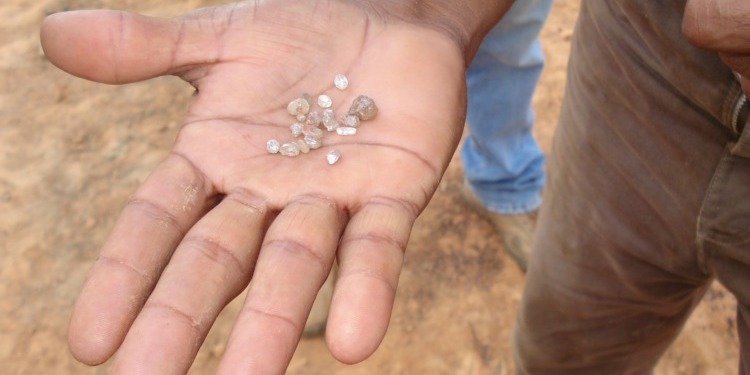 Diamonds mined in Zimbabwe. Zimbabwe has petitioned the UN over its diamond and ivory ban. [Photo/Athena Risk]

Zimbabwe has asked the United Nations (UN) to assist it in resuming international diamond commerce.

Under a severe global blockade imposed by the European Union (EU) and the United States during the last decade, gems from the Marange diamond resources have been barred from major international markets.

The two power blocs have justified their hardline stance by citing security forces’ brutality against unarmed diamond panners in the Marange claims and the use of torture and intimidation.

However, authorities in Harare have been shaken by deepening economic volatility, and rising poverty levels as important elections loom in 2023. The use of the much-needed revenue from the mineral would be a welcome relief to the economy.

They also asked Alena Douhan, the UN special rapporteur on the detrimental impact of unilateral punitive measures on the realization of human rights, to negotiate the return of the ivory trade. Douhan wrapped ended her 10-day review of the impact of sanctions on Zimbabwe, blaming Western sanctions for sparking the country’s agony.

Zimbabwe chastised the West for averting Harare’s breakdown by denying “access to markets for Zimbabwe’s diamonds sector” and causing “disinvestment, corporate closures, and a currency collapse” in a document titled “Economic Impact of Sanctions on Zimbabwe.”

Zimbabwe, which is thought to hold 25% of the world’s diamond reserves, has sunk deeper into international turmoil following revelations that over USUS$14 billion had been taken by oligarchs in the Marange highlands, where the US has expressed concerns about forced labour and human rights abuses.

Security forces mercilessly attacked illegal miners around the end of 2008 to gain sole ownership of the mines for the state, prompting the West to label Harare’s jewels “blood diamonds.”

One of the main topics they discussed with Douhan was whether the UN might assist Harare in starting a diamond and ivory trade.

Only a few buyers are willing to stake their reputations by trading with Zimbabwe. Zimbabwe’s diamonds are currently being purchased by Middle Eastern buyers and several players in eastern European countries such as Belarus. Unfortunately, the Prices currently available are low compared to what the country would earn if it sold on foreign markets due to limited demand. As a result, the government is losing potential revenue.

Zimbabwean officials believe that Western countries use the Convention on International Trafficking in Endangered Species (CITES) to halt the ivory trade.

Zimbabwe’s government claims that Harare’s economy has been purposefully disadvantaged to create a humanitarian crisis due to diamond sanctions and the suspension of the ivory trade.

The goal of the sanctions on Zimbabwean diamonds was to stop the flow of “blood” or “conflict” gems into the world’s most important markets by keeping them out of the legitimate trading system.

The Minerals Marketing Corporation of Zimbabwe has lost a fourth of its regular raw diamond prices due to these international sanctions. The country has been obliged to look for new markets, such as Dubai or Mumbai, where prices are far lower.

In 2019, an enraged Mnangagwa lambasted CITES for continuing to prohibit the ivory trade. After Zimbabwe, Botswana, and Namibia requested a timeframe to sell USUS$600 million worth of ivory stockpiles but were denied, fears of an environmental crisis arose as elephant numbers grew.

The governments want to use the proceeds from ivory sales to help manage wildlife parks. The three countries are home to many of the remaining African elephants, but overpopulation has resulted in considerable human-animal conflict.

These recommendations show how frightening events in the currency market have shaken the authorities in Harare. A widespread drabbing of the Zimbabwe dollar on the parallel market has put the country’s stability in jeopardy, raising fears that the country would relapse into new anarchy akin to the 2008 crash.

Zimbabwe’s economy has been labelled a “pariah” in international relations, and has struggled to secure funding from international lenders and raise the funding needed to rehabilitate its crumbling infrastructure.

Harare appears to be pushing to end the crisis, including battling for access to the international markets after two decades of weathering a harsh international embargo estimated to have cost the country over US$100 billion.

The UN ambassador concluded her trip, and she criticized Western nations for imposing a strict embargo on Harare. She is expected to give a comprehensive report to the United Nations next year.