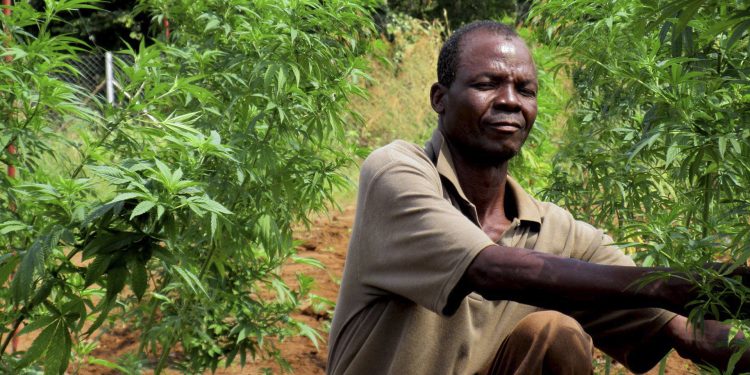 A cannabis farmer. Africa could see the value of its legal cannabis rise to at least US$7.1 bn by 2023. [Photo/Zenger News]

Despite Africa's apparent suitability for wide-scale cannabis cultivation and the plant's deep-rooted status in the culture of several African nations, its use remains forbidden in all but just a handful of African nations.

In a recent state of the nation address, South African President Cyril Ramaphosa hinted at a policy change on the country’s cannabis approach.

In a speech that highlighted familiar solutions to a grim economic situation in South Africa, the head of state pointed toward an intention by his government to review regulatory and policy frameworks for cannabis and industrial hemp to realize the vast potential for job creation and investment.

The South African government intends to make sure that cannabis, a natural product, gets industrialized – and no longer just restricted to smoking.

Despite the humorous tone, which drove the audience to a smattering of applause and laughter, it was clear that Cyril Ramaphosa pictures the industry as a very serious proposition. The president observed that the cannabis sector and legal hemp could create more than 130,000 new jobs in South Africa. The president pointed out Lesotho as a clear example of a nation already reaping huge benefits from cannabis cultivation to drive his point.

South Africa is among the most recent nations to rule firmly in support of a sector that has experienced an astounding transition from a universal shadow industry to an agro-industrial powerhouse. From lifestyle supplements to recreational smoking and medical cannabis, legal, medical, and cultural change is wafting the whiff of the once forbidden plant decisively into the global mainstream.

According to The African Cannabis Report, Africa could see the value of its legal cannabis rise to at least $7.1bn by 2023 across nine major African nations if they legalize medical use and recreational use. Globally, the Covid-19 lockdown period skyrocketed cannabis sales in diverse regions. According to researchers, the sales of recreational (adult-use) cannabis, medical cannabis, and CBD (an active cannabis ingredient commonly used as a natural remedy) rose to $37.4bn in 2021. They could top $102bn by 2026.

By late 2021 only Canada, Uruguay, and a few US states had fully legalized recreational cannabis. Still, Israel and Mexico are tipped to follow suit this year, and Switzerland and the Netherlands are readying legal trials. In the meantime, dozens of nations worldwide already consent to cannabis for medical use and allow over-the-counter sales of CBD-infused products, including drinks, snacks, and oils.

These universal trends offer an exciting opportunity for the various African countries with an ideal climate for growing cannabis.

Chris Duvall, the professor and chair of Geography and Environmental Studies at the Latin American and Iberian Institute of the University of New Mexico and author of The African Roots of Marijuana, notes that Africa has led in global production for several decades. Duval attributes the lead to Africa’s substantial comparative advantage; the plants can grow outdoors, the continent can grow multiple crops per year, inexpensive agricultural labour, and relatively cheap inputs.

Nevertheless, despite Africa’s apparent suitability for wide-scale cannabis cultivation – the United Nations approximates that over 38,000 tonnes are illegally produced across the continent yearly – and the plant’s deep-rooted status in the culture of several African nations, its use remains forbidden in all but just a handful of African nations.

Moreover, companies desirous of venturing into the sector have to navigate high startup costs, strict regulations, and country-specific legislation. Some critics argue that only cash-rich foreign firms can successfully take advantage of Africa’s market, locking out homegrown producers and setting up a standard narrative of raw material extraction with limited in-country value addition.

Due to its competitive advantages, Africa is critical within global markets as a production base. Who controls that, and who is creating wealth off of that?

Lesotho in the lead

Lesotho was one of the first African nations to award licenses for cannabis cultivation for scientific and medical purposes and now rests as a model of how Africa’s cultivation ambitions can be realized.

The Kolojane facility, sitting on a flat plain amid Lesotho’s spectacular mountains, is the site Ramaphosa had in mind when he mentioned South Africa‘s neighbour’s massive cannabis success. Thousands of cannabis plants bathe the country’s plentiful sunshine under a giant permeable hail net. Workers harvest and prune the plants with their hands and machinery before moving the biomass to the parking area, examining, measuring, and packing.

Lesotho’s advantages go beyond its natural environment and include a receptive regulatory regime and a favourable industry ecosystem. Lesotho was the first country in Africa to legalize the farming and processing of medical cannabis in 2017. It has been a unique country apart that has seized the opportunity to lead its African counterparts, and by doing so at that stage, the nation has amassed a lot of capital.

Lesotho has its operation positioned within a special economic zone in the Mafeteng region affording the country a lot of benefits, one of which is a lower corporate tax rate. The country’s government supports us and does not try to put up barriers.

Africa has an undoubted potential to be a world leader in cultivating cannabis and its products. Still, tight domestic controls and burdensome global regulations stand in the way of creating a booming multi-billion-dollar industry. Finding a liberal host country in which to cultivate is only part of the challenge of running a sophisticated global cannabis supply chain characterized by tangled regulation, demanding export principles and industrial-scale competition in the developed world, mainly North America.

According to Mark Corbett, market navigation requires expertise and persistence.

Whereas CBD-infused supplements typically fall under novel foods regulations in the United Kingdom, for example, in South Africa, such products may be classified as complementary medicine with dosage limits limiting how much a person can buy. Companies are forced to apply separately to national regulators, and in some target nations, just knowing which regulator approves which product is a dilemma.

It is sufficiently clear which regulators have authority in other markets –European medical markets export products usually have to meet demanding scientific standards that only the best-organized companies can hope to meet.

The resolve on strict product uniformity required by global regulators often fails to favour smaller-scale African farmers who farm outdoors, where controlling temperatures, soil toxins and other factors are much more difficult. Africa’s “neo-colonial” industry hugely services the export market but is detached from the cultural context of historical cannabis farming and proficiency in Africa itself. This is a model of cultivation that excludes experienced Africans at the expense of well-capitalized foreigners.

African seeds are purchased at a pittance for farming in the global market.

The legal and global markets systematically disadvantage ordinary people in South America, Africa, and South Asia. In places that are not capital intensive, Africa’s comparative advantage aiding the growth of multiple crops all year long is taken away. The water and energy demands of indoor production are insanely high, and the way it is controlled currently means it is more industrial than anything else.

These genetic clones have to be grown under these particular conditions for uniformity. The result is a peculiar fusion of industry and plant.

As a result, African companies are pushed to consider how they can unlock value carefully. For Highlands, a production company in Lesotho that last year merged with Goodleaf, a South African CBD brand with a portfolio of 30 products that are distributed online, in coffee, and retail shops, the answer lies in focusing on specialized medical and consumer products as opposed to cannabis exclusively customized for the international medical smoking market.

A way to improve opportunities favoured by small and large scale cultivators would be freeing up the African markets for local consumption. Many Southern African countries legalize medical use, with none entirely permitting recreational use. Therefore, the legal environment in Africa remains one of the most restrictive in the world.

South Africa, however, may be an indication of things to come. Gabriel Theron, CEO of South African cultivator Cilo Cybin and founder of Africa’s first cannabis-focused particular purpose acquisition company, which is due to list on the JSE, says that there is a growing realization that an export-only model is doomed to failure. According to him, an export-only model is not sustainable.

There is a need to de-schedule the THC and CBD levels to open up the recreational market and thus the medicinal market. That also has implications for foreign investment. In the case of operations in Australia, Europe, and North America, openings in South Africa can only happen where there is a grasp of the local markets. African regulators should pursue a more agile regulatory system, flexible towards cannabis and other plant-based medicines. Recreational legalization would particularly unlock a substantial domestic market.

Value addition can take many forms. Historical strains of cannabis grown on the continent, such as Malawi Gold and Durban Poison, first became popular in the illegal market and gained valuable brand recognition.

In a more flexible regulatory and regulatory environment, African countries could push for a form of geographical suggestion in the same way that France guards champagne. Currently, valuable African varieties can be grown under lights anywhere globally with no benefit attached to the communities from which they originated.

African people can potentially produce local varieties based on local knowledge. In addition to adopting a more active role in directing and making decisions about the production of export cannabis varieties, many Africans have a wealth of information concerning industrial agriculture and export markets.

But similar to capital access and being in positions of power, African companies are disadvantaged compared to some foreign companies with a load of cash to invest. Therefore, Africa must offer more if its producers are to flourish in an increasingly commoditized global market.

Genuinely unlocking the industry’s value will demand African countries take a leadership role in global deliberations on cannabis legalization and regulation – a process must first address the continent’s harsh restrictions on the plant.

There needs to be actual African legalization where the agricultural practices, terms, processes, and decision-making are controlled in Africa, by Africans, rather than just being some company that goes in and pays, for instance, for an annual license.

There has to be a different kind of approach to brand building. This way, Africa will undoubtedly unlock the economic value of cannabis cultivation.