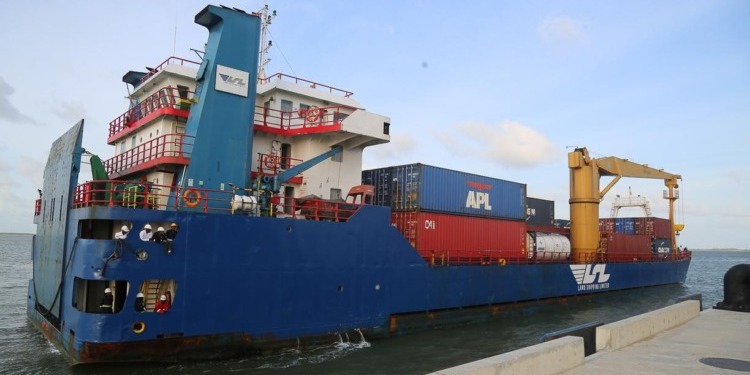 MV AMU1 docking at the Port of Lamu. The port’s success will see a shift in geopolitics and realignments as African nations continue with their shift from the West. [Photo/LAPSSET]

Lamu Port was conceived in the mid-1970s

Kenya’s investment in the Port of Lamu seems to be bearing fruit with the port receiving a transhipment consignment of 62 containers from Zanzibar this July.  The consignment aboard the MV AMU1 that docked at Lamu Port on July 15, 2021, belongs to the CMA CGM Shipping Lines and contained agricultural products from Zanzibar.

With this latest development, the Port has received a vote of confidence from the shipping industry and the dream of making Lamu the port of choice for exports, imports and a transhipment hub as becoming a reality.

Read: Sh10bn to be allocated for Lamu Port

Why Lamu Port was conceived

After the Mombasa Port, Lamu is Kenya’s second deep-water port.

The Lamu Port was conceived in the mid-1970s in a move set to reduce the economic dependency on the port of Mombasa. Then, the Ministry of Power and Communications started studying the possibility of setting up a deep-water port elsewhere on the Kenyan coastline.

At the time of this plan, Mombasa was becoming increasingly strained as business volumes and demand rose. The project was however halted for close to 30 years due to various factors including among them exorbitant projected costs.

In 2012, Kenya’s then-President Mwai Kibaki hosted Ethiopia’s then Prime Minister and a South Sudanese delegation when the port’s foundation stone was laid. The three countries agreed to fund the project from their respective national budgets. Each country would finance their part till the completion of what was now known as the Lamu Port South Sudan-Ethiopia Transport (LAPSSET) corridor.

On conception, the Lamu Port was meant to connect the landlocked economies of East Africa to global trade routes. In addition, the project was to help develop alternative routes for among others, the exportation of South Sudanese oil to India and the Far East. By then and until now, the oil is pumped from the Greater Nile Oil Pipeline to the Port of Sudan.

For Ethiopia which mainly depended on exporting its goods from the port of Djibouti, Berbera (Somaliland), the Lamu Port would offer an alternative in addition to the ports of Assab and Massawa on the Red Sea after its rapprochement with Eritrea.

The opening up of the alternative options for Ethiopia led to the international transport corridor dwindling until its revival in 2012.

The Lamu Port project is an addition to other ports along the East African coastline as the demand for logistics corridors and greater supply chains into the landlocked countries of East and Central Africa increase. In addition, the port is in readiness to address the needs of the growing population in the coming decades.

With the expected demand growth over the coming decades, the LAPSSET showcases the importance of strategic decision-making when it comes to infrastructure and regional connectivity. The Africa Continental Free Trade Area (AfCFTA) is expected to spur economic development on the continent and Kenya is primed to reap major benefits if the Lamu Port plan is implemented without fail.

With the landing of the Zanzibar consignment at Lamu Port, the Kenya Revenue Authority (KRA) has deployed the new ICMs Customs System at the Port to ensure faster clearance of cargo and enhance turnaround time to secure a competitive advantage in the shipping industry and pull more business to the Port.

Additionally, KRA says it will work closely and partner with industry players that include shipping lines, importers, exporters, clearing agents and logistics to enhance trade and market the Port.

Several government agencies are working at the Port to enhance efficiency and eradicate delays through a common approach in solving trade-related issues and boosting the competitiveness of the Port.

The Lamu Port is addressing the challenge where moving goods around Africa has been an enormous and uncertain task. There are a few companies that have managed to deliver goods around the 30.37 million km² landmass. Africa’s supply chain is largely broken and Lamu Port on the Indian Ocean is a welcome addition to help with supplying goods to the hinterlands.

By creating the world’s largest single market, the AfCFTA helps confront some aspects of the logistical challenges Africa has been experiencing in supplying goods and services to the 1.3 billion people on the continent.

Half the implementation of the AfCFTA is achieved by unlocking intra-regional trade and thus projects like the LAPSSET are expedient in ensuring that there is a smooth and efficient movement of goods on the continent.

Apart from boosting Kenya’s status as a logistics and a transport centre in East Africa and the Horn of Africa region, the port will be a key transhipment hub. This puts the Port in a position to attract key shipping lines and competing directly with the Durban Port in South Africa and Port of Djibouti in the Horn of Africa.

The Lamu Port can handle large container ships that cannot dock at Mombasa since it has a depth of 17.5 metres, as opposed to 15 metres in Mombasa.

With this depth advantage, the Port of Lamu is in an ideal position to handle far greater traffic than Mombasa with predictions the Lamu traffic will reach 23.9 million tonnes by 2030. The port is also strategically positioned to meet the inclusive demand from both South Sudan and Ethiopia.

The Lamu port has a huge potential to transform the regional economy through increased trade and integration as well as interconnectivity.

LAPSSET has a network of roads, rail, and a pipeline which will help lower the cost of transportation to the hinterlands.

For instance, the LAPSSET project is reducing the distance between Kenya and South Sudan and to some parts of Ethiopia. By doing this, Kenya will gain greater access to markets for its products and with the AfCFTA at play, the East African nation is well placed to benefit immensely from the multibillion-dollar project.

Another source of revenue for Kenya will be from cargo transiting through the Lamu port to other African countries, most of which are landlocked.

Lamu Port and the BRI

The viability of China’s Belt and Road Initiative (BRI) is heavily dependent on Sub-Saharan African ports. These ports are integral to the BRI and they form the backbone of the initiative. Chinese investments have largely focused on infrastructure in Africa.

The construction of the Lamu Port has reinforced China’s image as a development partner on the continent but the investments across the continent go deeper than just infrastructure.

The success of Lamu Port will see a shift in geopolitics and realignments as African nations continue with their shift from the West.