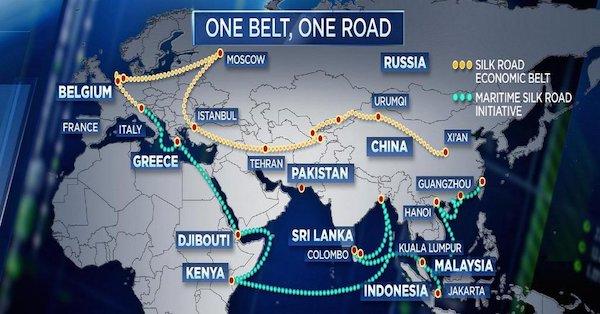 The Belt & Road Initiative is China's most ambitious attempt to tilt global economic dominance its favor. Africa plays a central role in this strategy but does not have a meaningful stake in the initiative.

China’s President Xi Jinping’s ambition is to make his country a superpower in every respect of the concept. His driving ambition is for China to be a global superpower in terms of military might. He has almost realized his goal. In 2019 during the celebrations of the 70th anniversary of the founding of the country as a communist state. The government held a military parade that even the United States, the leading military superpower sat up to take notice. The parade demonstrated China’s impressive armed forces and their even more impressive arsenal of military hardware. China’s aggression towards Taiwan which it has long believed should be part of its territory attests to its growing military might.

Another area where Xi intends to grow China’s influence and make it a leading nation is economically. The country is well on course to achieving its goal. Those not fully convinced of China’s dominance in the world would be well advised to look at the nation’s foreign exchange reserves. The country has at least US$ 3.1 trillion in foreign exchange reserves whereas the United States has US$ 716 billion according to recent statistics from the World Bank. For perspective, the Chinese Communist Republic has over 4 times as much in foreign exchange reserves than the United States. Reserves are important because they underscore the value of a country’s currency. They also determine how well a country’s economy can withstand external and internal shocks.

Just in comparison with the US alone, in terms of foreign exchange reserves is four times more likely to withstand a shock to its economy than the United States can. So strong is the Chinese foreign reserve position that they have been the largest holders of United States issued treasury bills and bonds. They are effectively the largest lender to the United States in what can only be described as a dramatic and ironic turn of events. The world’s economic fortunes for the last 20 years have been inextricably linked to the economic prosperity and growth of China.

Since the turn of the millennium, China’s rapid urbanization has created a demand for natural resources which led to the global economy rising. It used to be said in the 1920s and 1930s that if the United States sneezed then Europe would catch a cold. This was because of how much Europe depended on its trade with the United States for its economic prosperity. Presently, the whole world cannot afford to have China’s economic growth even slow down marginally because of how intertwined its fortunes are with the Asian country. China cannot sneeze because the rest of the world would catch pneumonia.

China’s nearly insatiable appetite for natural resources for its urbanization and other projects has led it to create an initiative to secure supplies of the commodities from the rest of the world. This initiative known as the Belt and Road Initiative is another way that the Asian country is asserting its dominance over the rest of the world. According to a paper published by the OECD titled: “China’s Belt & Road Initiative in the global, trade, investment, and finance landscape,” China’s Belt and Road Initiative (BRI) development strategy aims to build connectivity and cooperation across six main economic corridors encompassing China and: Mongolia and Russia; Eurasian countries; Central and West Asia; Pakistan; other countries of the Indian sub-continent; and Indochina. This was the original stance of the initiative when it was conceived however, in recent times Africa and its natural resources have begun to feature more prominently.

To secure enough coal and fossil fuels to power its industries, China no longer considers it enough to just have supply arrangements with producers of energy. The country through BRI is taking several steps forward to fund, develop, extract, and own these natural resources from countries that are participants of the BRI. In Asia specifically, the OECD noted in 2018 that an infrastructure gap of at least US$ 2.6 trillion is needed to facilitate the economic cooperation envisaged by the BRI. China with its massive reserves can provide part of the funding needed to plug the infrastructure gap. This is one of the central thrusts of the BRI. Its priorities are hardware and funding.

BRI investment projects are estimated to add over USD 1 trillion of outward funding for foreign infrastructure over the 10 years from 2017. The funding is a particularly unique opportunity for African countries which are rich in natural resources but are poor in terms of infrastructure. China has gone so far as to create specialized vehicles through which funding for these projects will be channeled like the Silk Road Fund where funding will come from state-directed development and commercial banks.

The question people then ask is why? What is China’s motivation for coming up with this initiative which on the face of it seems altruistic and all the countries that have signed up to it are certain to benefit? As stated by China, the focus on connectivity within the BRI is both about facilitating trade and investment, thereby developing neighboring countries, as well as strategically shoring up its security of energy, resources, and food by taking a regional leadership role with its most important neighbors. Broadly this is the aim of China.

From the graphic, it is obvious that Africa is central to the BRI due to its reserves of natural resources. Recognizing this China has made significant investments in the development and extraction of resources on the continent. The bulk investments made range from coal and diamonds in Zimbabwe (where incidentally the Chinese government is constructing a new parliament building in Mount Hampden). China has also been an important source of sovereign debt for the often cash-strapped African countries which have been mortgaged against choice access to those countries’ natural resources. You would be hard-pressed to find a country on the African continent where China has not either developed a mine or financed the construction of an important national project or has lent the government money or engaged in a combination of these.

What is interesting to note is that Africa is not mentioned in any of the 6 corridors of the BRI. This is especially given that the architect of the initiative aims to achieve economic cooperation and interconnectedness. The success of the project/initiative depends heavily on the natural resources will supply to the extent that if the supply of these natural resources were in some way or other disrupted or cut off, it would be hard to imagine the BRI being successful. The economic belt of the initiative does not pass through or has any kind of contact with Africa. At best there are maritime connections and proposed and existing railroads which can be described as piecemeal. Africa because of how central it is to the BRI needs a greater stake in the future success of this initiative.

Zimbabwe's Platinum is not for Zimbabweans!