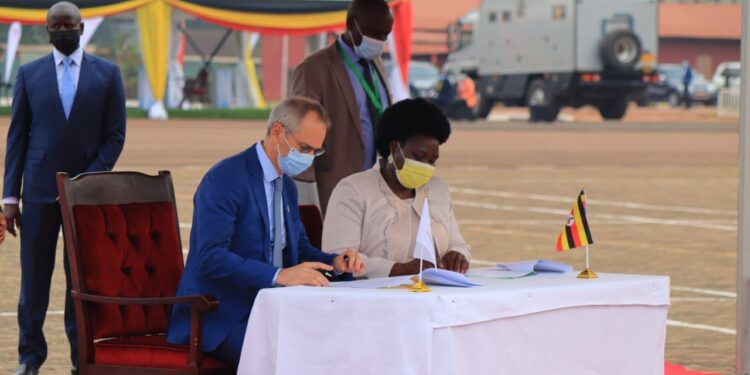 by Joseph Kangethe
in Extractive and Energy, Investing, Tanzania, Uganda
0
Share on FacebookShare on LinkedIn

TotalEnergies, China National Offshore Oil Corporation (CNOOC), the governments of Uganda and Tanzania have reached an agreement to inject more than US$10 billion in developing and expanding the EACOP project.

The agreement was inked in Uganda’s capital, Kampala, as part of the Final Investment Decision (FDI) for the Uganda-Tanzania crude oil pipeline in the Lake Albert region.

The East Africa Crude Oil Pipeline (EACOP) project will comprise the development of oil fields, oil processing facilities and a pipeline network in Uganda. The export pipeline will cut through Tanzania to carry landlocked Uganda’s crude to a port on the Indian Ocean.

Uganda’s Minister of Energy and Mineral Development, Ruth Nankabirwa said in a speech ahead of the signing that the agreement would put the country on the path to first oil in 2025. She added that EACOP would create approximately 160,000 jobs during the project’s development.

The agreement dictates TotalEnergies will develop solar, wind, geothermal, and other renewable technology power projects in Uganda to add a combined installed electricity output capacity of 1 Gigawatt by 2030 to the current 1.2-Gigawatt production.

Uganda currently has one of the lowest per capita electricity consumptions in the world with 215 kWh per capita per year. The country has a total installed energy capacity of 882MW, according to Energypedia.

Early last year, the Global Wind Energy Council reported that the continent was only tapping 0.01 per cent of its wind power potential.

According to the wind resource data published in October 2020 by the World Bank’s International Finance Corporation, the technical wind resource potential on the African continent alone is over 59,000 GW, enough to power the continent’s energy demand 250 times over.

Currently, the total wind power capacity in the continent is over 7 GW, which helps to avoid 10.7 million tonnes of CO2 emissions annually

The project will realize the largest crude oil pipeline in the world, running for 1444km. The signed agreement also targets stimulating trade and investment between the two countries, strengthening their cooperation, and promoting regional integration.

President Samia stated that the project will generate revenue for both countries while also creating short-and long-term employment opportunities for highly skilled and semi-skilled professionals as well as casual laborers, thereby addressing the youth unemployment crisis.

Uganda discovered oil in the Lake Albert basin and has since confirmed the presence of 6.5 billion burrows, which are expected to serve both domestic and international markets for the next 30 years.

The Petroleum Authority in Uganda says that the engineering designs for the whole project are ready, compensation plans for land acquisition have already begun, and procurement for logistics is underway.

Uganda’s Oil Minister, Ssentamu Nankabirwa, says that construction work has already begun in two mining fields, Kingfisher and Tilenga, on the shores of Lake Albert. The two fields are estimated to contain up to six billion barrels of recoverable oil resources.

East Africa’s rapid development has been largely attributed to the capital investment in oil, gas, and manufacturing industries.

EACOP construction will result in a 60% increase in foreign direct investment (FDI) for both countries.

Michael Tiffen said that the project will be constructed and operated by a pipeline company with a shareholding of Uganda National Oil Company (15% of shares), Tanzania Petroleum Development Corporation (TPDC with 15% of shares), TotalEnergies (62%), and CNOOC (8%). The two oil companies have already spent over $4 billion on the infrastructure of the pipeline.

Once produced, the crude oil will be partly refined in Uganda for the local market and the rest exported to the international market through EACOP.

Read: Lack of commitment costs Kenya a slot in EACOP