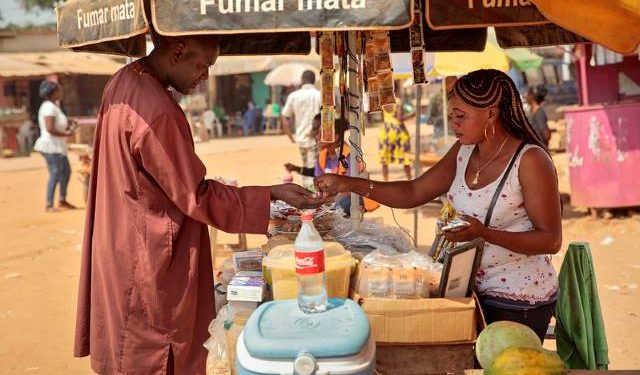 A trader in East Africa. A proper economic renaissance in Africa is pegged on continent's youthful population, creativity and the end of colonial-era politicians. [Photo/The Borgen Project]

Many African countries are leading the way to impressive economic growth at the dawn of the twenty-first century.

Africa has been largely absent from the global growth map over the past century but this narrative is changing, one country at a time.

Many African countries are leading the way to impressive economic growth at the dawn of the twenty-first century. Ethiopia, Rwanda, Mozambique, Chad, Nigeria and Angola are six African countries whose economies were among the world’s ten fastest-growing from 2001 to 2010.

Some of these countries are rich in resources, while others are not but in both cases, the adoption of targeted economic policies has resulted in growth. Post-conflict reconstruction in Rwanda and Angola have shown long-term growth and stability.

The Covid-19 pandemic had a devastating impact on the global economy and Sub-Saharan Africa, like other developing regions, saw its GDP fall by 2.6 per cent in 2019, following a year of strong growth of 3.2 per cent.

This pandemic’s snag is unfortunate but offers an opportunity for the continent to build back better. SSA has seen a resurgence in manufacturing which is a welcome opportunity. Economic growth and the creation of new jobs for a large number of people have historically been associated with industrialization in the West and more recently in East Asia which has allowed the region to catch up economically with more developed nations.

With the reliance on imports, the little manufacturing activity in Sub-Saharan Africa disappeared as did the traditional path to development and reduction of poverty up until 2000. Textile mills, leather tanneries, ceramics factories and other manufacturing sectors were all casualties in Kano, Nigeria’s largest city. In Ethiopia, industrial parks were deserted, while South Africa’s shoe industry collapsed.

But there is a resurgence with the pattern shifting all across the continent.

In data from 51 countries, including 18 in Sub-Saharan Africa ranging from South Africa to Ethiopia to Nigeria to Kenya and Mauritius, the United Nations University notes that the continent is now in a better place for an economic renaissance.

The GDP of the 18 countries in the data provided by the UNU accounts for nearly three-quarters of the region’s total.

From around 2010 onwards, manufacturing began to grow in Ghana and Nigeria, while it had been steadily increasing in Rwanda since the 2000s. Volkswagen opened its first assembly plant in Rwanda in 2018 as part of the country’s industrialization.

The beauty in Africa finding its footing is that there are now more opportunities than there were before the internet age.

The renaissance of African creativity

Mastercard notes that the pool of talent in Africa is deep. The creative sector in Africa is gaining momentum and interest thanks to social media and digital streaming services, which have made African artists and creatives more widely known and accessible. For a sector that is often overlooked and underutilized, what does this mean?

The creative industries employ more young people between the ages of 15 and 29 worldwide than any other sector, according to the United Nations Educational, Scientific and Cultural Organization (UNESCO). As such, Africa’s economies will need to create more jobs to keep up with the rising number of young people entering the workforce.

S&P Global Ratings notes that the sub-Saharan African working-age population will more than double by 2050. This will make the region the world’s largest in terms of people in employment, creating unprecedented opportunities for economic growth.

In a 2021 report, S&P Global Ratings estimated that in the key economies of the subcontinent, growth in the working-age population would add up to three percentage points to annual GDP growth.

Sub-Saharan Africa is currently experiencing the most significant demographic transition in their history and for decades to come, the region’s economic outlook will be influenced by unprecedented decreases in fertility rates, lower child mortality and increases in life expectancy.

The demographics of a country’s population have a significant impact on its economic development. There has been a lack of economic growth in the region over the past decade, and demographic change could be an opportunity for growth, but it could also cause instability and fragility.

According to the report, fertility rates have been steadily declining since 1990, when they stood at 6.3 children per woman over a lifetime.

A natural replacement rate of 2.1 is predicted for some countries in Sub-Saharan Africa by the United Nations in its report.

Africa’s stagnation has been blamed on the colonial-era politicians overstaying their mandates, stealing and cronyism.

However, most of these are being replaced by younger leaders with no connection to the colonialists. The shift that is expected to sweep through Africa is expected to unshackle the continent from its colonial patronage and give it a new trajectory.

Looking at property ownership in Africa, there is a lot of connection to colonial heritage and in Kenya, for instance, there is still crown land despite the country claiming independence for more than 5 decades.

Africa’s renaissance is pegged on a major shift that will emancipate the continent’s way of doing business, manufacturing and value addition for the resources it produces.

Tourism has the potential to be a significant driver for growth and job creation in Kenya, and in virtually every country on the continent.

As the world reawakens from Covid, people are eager to travel, and this is a major opportunity for African countries, according to Håvar Bauck, the Founder of HotelOnline.

Bauck adds that while the travel and hospitality sector took an onslaught from the pandemic, what remains of the industry is now very resilient, because those that survived, were those that based themselves on domestic and intra-African tourism.

“In HotelOnline, we felt the direct impact. We offer active revenue management advice to hotels and vacation rentals across the continent, and almost overnight in March 2020, most of the revenue vanished,” notes Bauck.

He says that as a young company that had finally reached profitability in 2019, HotelOnline saw most of its gains from the past years go out through the window.

Bauck adds that to have any business at all, HotelOnline had to help its partners survive.

“They needed to pivot, and so did we. We had to help them tap more effectively into the local and regional sources of revenue.”

Covid was the biggest blow to the global travel and hospitality industry since WW2. Even with the best revenue strategies, it was tough. It was blood, sweat and tears. But the resilience and patience paid off.

“Our hotel partners made it through the crisis, and with them, so did we. We now stand stronger than ever, well-positioned to tap into the post-Covid rebirth of tourism,” adds Bauck.

In the years before Covid, Africa was the second-fastest rising tourism region in the world, growing at around 7 per cent annually. This has been from a low point, though: With 15 per cent of the world population, and 20 per cent of the landmass, Africa attracted only 5 per cent of the 1.4 billion tourist arrivals globally in 2018.

“It all starts with the marketing. I particularly admire the new campaign by Uganda Tourism Board, seeking to expand the narrative beyond just wildlife. Sure, everybody loves safaris, but that is what all African countries are trying to sell,” quips Bauck.

Bauck says it is time to break that narrative and sell something new in addition to the obvious national park packages. For instance, adventure tourism, adrenaline-packed experiences, lifestyle and culture.

He adds, “Also target modern-era digital nomads who can work from anywhere, and who wouldn’t mind working from a beach for three or six months. Believe me, they will spend some good money during their stay!”

Bauck says that marketing should also aim at breaking the dependence on travel agencies abroad, who take huge margins while perpetuating the perception that safaris are exorbitantly expensive luxury products. Most tourists from Europe and North America barely know that their dream vacation could be half the price if only they would book through local agents.

The HotelOnline founder says that this is the time to be innovative and attract new segments of travellers by offering something new.

He concludes: “Realizing the full tourism potential of destinations on this marvellous continent will drive economic growth and job creation, and will also help change and diversify the narrative! Now we are talking about a proper economic renaissance!”