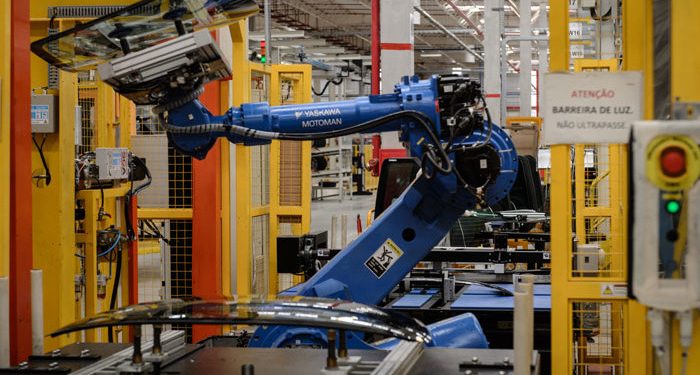 A robot arm carries a glass part on the assembly line of a factory. [Photo/AFP]

Using machines and AI in Africa's manufacturing sector in 2022

The widespread adoption of information and communication technology (ICT) by manufacturing companies the world-over is driving competition and permanently disrupting the playing fields.

According to an article by Cision PRNewswire published on May 11, 2022, the competition for a strong manufacturing industry is a global one, and initiatives to promote and advance manufacturing from other governments include Germany’s “Industrie 4.0”,  France’s “Industrie du Futur,” and China’s “Made in China 2025”.

Japan has planned Society 5.0 (Industry 4.0), targeting its economic and social challenges, such as an aging population, labor shortages, and weak growth through advanced technologies. Germany Industrie 4.0 Initiative aims to create an industry infrastructure fit for sustainable future manufacturing in the country.

Recently, African countries have made promising progress towards industrialization, exhibited in the continent’s strategic framework for leveraging the pan-African drive for achieving inclusive and sustainable development, Agenda 2063.

However, the continent has faced unprecedented disruption over the past two years. These unprecedented disruptions include the Covid-19 pandemic, the global shipping crisis, and the Russian invasion of Ukraine. These brought into question the future of development models in Africa. They also accelerated parts of the digital economy, creating new opportunities. As a result, the continent has a unique opportunity to rebuild the weakest areas brought in plain sight by these disruptions.

African manufacturing firms also need to shift from a passive to an active approach toward digitalization. Smart Manufacturing technology has the potential to radically alter the manufacturing sector, creating gaps for new players in new markets to emerge and dominate.

According to the London School of Economics and Political Science, African countries are not only lagging in the deployment of digital technologies but also benefit less due to poorer absorptive capacity and infrastructure.

However, the World Bank argues that automation is concentrated in specific sectors, such as computers, electronics, and the automotive sector. African economies can mount an export push and build up industrial capabilities in sectors less affected by global and technological changes, such as paper and paper products, non-metallic minerals, and garments.

According to an article by Brookings dated March 29, 2022, Fourth Industrial Revolution (4IR) technology creates opportunities for businesses to reduce production costs, improve production and revenue, and introduce new business opportunities. In addition, the deployment of 4IR technology could lead to the creation of employment since technology complements labour.

However, there is a growing fear that many will lose their jobs to machines.

The fear of job losses due to automation is not a new phenomenon. We can trace it to the nineteenth-century Luddite protests when textile workers in Great Britain destroyed machines in fear of being replaced by them. But, these fears have been proven unfounded as subsequent industrial history has unfolded.

Brookings also found that many longstanding obstacles to upgrading production in Africa will deter the adoption of 4IR technology. Prominent among these are infrastructure and logistics bottlenecks, insecure land rights, difficulties in importing inputs and exporting output, and bureaucratic red tape.

According to an article by Pumps Africa published on May 31, 2022, the South African government is interested in the opportunities presented by Industry 4.0 technologies. President of South Africa, Cyril Ramaphosa, has increasingly cited ICT technologies as having the potential to address the country’s stubbornly high unemployment, poverty, and inequality in his SONAs. Further, Cyril Ramaphosa’s commitment to digitizing South Africa’s economy culminated in the Report of the Presidential Commission on the 4th Industrial revolution, gazetted in 2020. The report presented a policy framework and clear goals for the rapid adoption of ICT technologies in manufacturing, among other sectors in South Africa in the near future.

In a related article by Xinhua dated May 24, 2022, South Africa’s minister of trade, industry, and competition, Ebrahim Patel, expressed hope that related businesses and sectors in BRICS countries will cooperate to enhance digital manufacturing.

“South Africa is taking advantage of the industrial internet and digital manufacturing to create more opportunities for young people,” he added.

He made the remarks at the BRICS Forum on Development of Industrial Internet and Digital Manufacturing in Xiamen, east China’s Fujian Province, on May 23, 2022. The industrial internet and digital manufacturing are taking root in BRICS countries, namely Brazil, Russia, India, China, and South Africa. There are also broad prospects for cooperation in these fields, transforming modes of production and shaping people’s experiences of life, work and study.

As far as 2020 the London School of Economics and Political Science said evidence from Kenya suggests that digitalisation can open up new opportunities within manufacturing. This is in terms of increased efficiency, diversification into more value-added products, and expansion in regional and global trade, lowering production costs, and increasing export competitiveness.

Africa faces widespread barriers to home internet compared to developed regions, according to statistics from the International Telecommunication Union. Digital costs are also much higher in Africa relative to the average income, with 7.12 per cent of the average income required to access 1 GB of mobile data, several times that of developed regions.

Africa is also facing the prospect of reshoring its labour-intensive industries due to advanced innovation.

However, according to UNIDO, Africa has taken measures to upgrade its advanced industrial infrastructure, most notably through the creation of innovation ecosystems and digital hubs. This has led to a 50 per cent growth in digital hubs by 2019, with countries such as South Africa, Nigeria, Kenya, and Egypt leading the way.

Moreover, the mobile revolution has also assisted many digital entrepreneurs to bypass some of the region’s issues with digital infrastructure, with over 80 per cent of Africans now owning a mobile phone, and e-commerce startups proliferating across the continent, especially in countries such as Mauritania, Rwanda, and Senegal.

At the policy level, several measures have also been taken to harness digitalisation for inclusive and sustainable industrialization, such as the adoption of the African Continental Free Trade Agreement, which aims to remove barriers to trade throughout Africa, and the African Union’s Digital Transformation Strategy for Africa (2020-2030), which aims to build an African Single Digital Market by 2030.