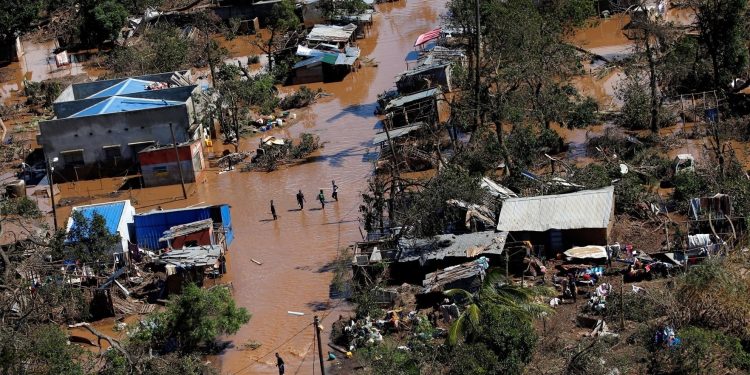 The United Nations Environment Programme (UNEP) approximates that climate change adaptation and natural disaster damages could cost developing countries a range of US$280 billion to US$500 billion per year by 2050.

by Joseph Kangethe
in Africa
0
Share on FacebookShare on LinkedIn

Every year, Africa is affected by numerous disasters, the threat varying adversely by geography and season. With a fast-growing population and the increasing impact of climate change, the disaster impact in Africa will likely increase in the coming years.

Although disasters occur throughout the continent, some countries are more affected than others. According to CRED Crunch, Kenya (61 events), Mozambique (57 events), South Africa (54 events), Nigeria (49 events), Ethiopia (44 events), and DR Congo (41 events) experienced the highest number of disasters as they regularly face storms, droughts, and flooding since 2000.

In terms of death tolls, Somalia ranks first with 20,739 deaths, while Algeria ranks second with 3,777 deaths and Mozambique with 2,530 deaths. In 2022 alone, the continent has experienced more than six cyclones.

According to a Fair Tech Institute whitepaper by Access Partnership, a global public policy firm for the technology sector, the annual number of natural disasters is set to increase by 37 per cent from 442 to 541 occurrences by 2025.

The whitepaper highlights the urgency with which national governments and the private sector must attach satellite technology to implement more effective disaster management efforts in Africa and globally.

The whitepaper comes after several organizations agreed that climate change would make weather-related disasters more frequent and widespread in coming years. The organizations propelling the idea over the worry of the disasters include:

The whitepaper further explains that the increased occurrence of natural disasters will overwhelm the National Emergency Telecommunications Plans (NETPs) and terrestrial service providers to minimize and regulate the human and economic cost of extreme weather events.

“Putting in place satellite services and next-generation satellite-enabled connectivity can mean the difference between saving millions of lives and losing them,” says Ivan Suarez, a senior policy manager at Access Partnership. “This move can also reduce government expenditure during and post a disaster.”

The Fair Tech Institute whitepaper provides a set of unique data that predicts the economic impact and the future burden countries will encounter if disaster communications planning is not taken with the weight it deserves.

Ivan Suarez added that the impact of natural disasters would be felt mainly by low and middle-income nations, which are relatively less prepared to adapt. Natural disasters currently cost the agricultural sector more than US$108 billion in low and middle economies in damaged crop and livestock production.

What stands at risk if the financing in climate adaptability remains low?

The United Nations Environment Programme (UNEP) approximates that climate change adaptation and natural disaster damages could cost developing countries a range of US$280 billion to US$500 billion per year by 2050.

To reduce the socio-economic impact of climate-related disasters, Access Partnership encourages governments to increase investments in setting up physical and social infrastructure and allow for the upscaling and acceleration of far-reaching, transformational and adaptive strategies. The most effective way is satellite networks and next-generation satellite technology.

Suarez concludes that there is a need to direct efforts towards fixing the underlying inefficiencies of our current communication systems, adding that the availability of communication networks is directly related to the ability to respond quickly to emergencies.

The whitepaper emphasizes the need to develop National Emergency Telecommunication Plans (NETPs), given the critical role telecommunications can play to deaths caused by natural disasters and to protect communities when disasters hit.

Keeping money in the bank won't make you wealthy

What to expect from medical insurance in Africa post-Covid