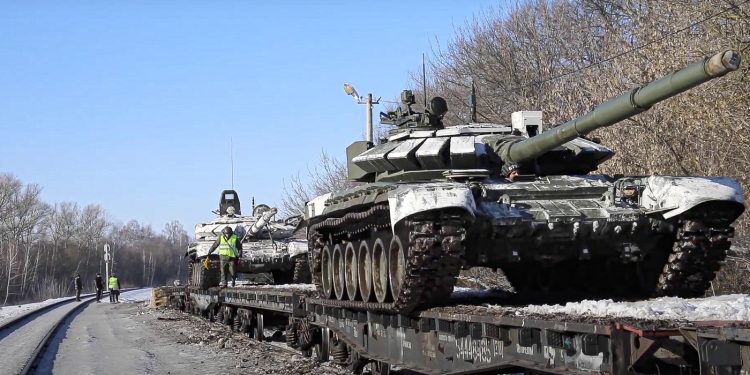 In this photo taken from video provided by the Russian Defense Ministry Press Service on Wednesday, Feb. 16, 2022, Russian army tanks are loaded onto railway platforms to move back to their permanent base after drills in Russia. Russia says it is returning more troops and weapons to bases, but NATO says it sess no sign of a drawdown as fears that Moscow could invade Ukraine soon persist. Russia has massed about 150,000 troops east, north and south of Ukraine. [Photo/Russian Defense Ministry Press Service via AP]

Every African region has felt the effects of Russia’s invasion of Ukraine, with West Africa also bearing the burden of a war miles away in Europe.

The Russian-Ukrainian conflict has hampered Africa’s potential recovery from the COVID-19 pandemic by raising food and fuel costs, interrupting the trade of services and goods, constricting fiscal space, limiting green transitions, and slowing the flow of development funding across the continent.

The crisis has jeopardized homes, communities, and nations across Africa. Before 2020, African countries were among the world’s fastest-growing. The COVID-19 pandemic undid the continent’s years of hard-won financial, social, and governance advancements.

In response to the epidemic, African governments implemented prudent economic policies, made strategic investments, and increased COVID-19 vaccine manufacturing and distribution. While the rest of the globe looked to be diminishing, Africa appeared to expand.

Africa outperformed projections of 3.7 per cent GDP growth by the end of 2021, reaching 4.5 per cent growth and demonstrating its tenacity and power to bounce back. Although the recovery was shaky, the continent seemed to be on course to meet the United Nations’ Sustainable Development Goals.

However, Russia’s incursion into Ukraine on February 24 brought with it a global power axis shift, with aftershocks reverberating worldwide. Every African region has felt the effects of Russia’s invasion of Ukraine, with West Africa also bearing the burden of a war miles away in Europe.

Implications of the crisis in Ukraine to West Africa

At a period when West Africa has been facing a severe food crisis since 2011, the Ukraine conflict has complicated matters further. Amid the extended crisis, the region’s issues have worsened, with disastrous economic and political ramifications.

Russia and Ukraine contribute to significant agricultural and non-agricultural exports to West Africa. According to FAO figures, the combined output of sunflower seeds from the two nations in 2020 stood at slightly 26.4 million tons or 50.2 per cent of global production.

Regarding wheat output, Russia is the world’s third-largest producer, with Ukraine ranking ninth. The agricultural and non-agricultural exports specified above enter West Africa’s food chain in various ways, and certain nations in the area rely heavily on them.

Several West African countries raise concerns about their reliance on wheat supplies from Ukraine or Russia.

According to estimates, Russia supplies 30% of the wheat consumed in Africa. Russia is the primary wheat exporter to West Africa, with Mauritania, Senegal, Guinea, Sierra Leone, Ghana, Nigeria, Cameroon, Benin, Ivory Coast, Mali, and Liberia being the top buyers. Wheat imports are significant in Mauritania, Mali, Senegal, Cameroon, and Benin, where Russia supplies about half of the wheat consumed.

Read: Investment opportunities for Africa to feed the world

Disruptions in the agricultural inputs markets

The crisis has further impacted the agriculture industry, with the price of agricultural inputs like fertilisers rising. West Africa imported Pesticides and fertilisers from Russia. Urea and phosphate prices had already increased by 30% and 4% by the end of 2021.

To these rises in cost must be added the hazards associated with China and Russia’s prohibition on fertiliser exports, which has caused further increases in the price of key agricultural inputs.

Inaccessibility to fertilisers is already substantially impacting productivity in West Africa’s dry regions, notably in the Sahel, which saw its worst farming year since 2011, with output decreases ranging from 6% to 38%.

In countries whose governments subsidise fertiliser imports, the spike in prices caused by the Ukraine crisis, along with the effects of COVID-19 on budgetary financial sustainability, would severely affect the capacity of major fertilisers.

Food and other essential commodities costs have already risen due to supply chain disruptions triggered by the pandemic. Global food prices are already growing in tandem with those of other commodities. Supply chain interruption causes additional price shocks as importing nations battle for supply in a tight market.

This current crisis is a further shock to the already affected agricultural commodity markets and will influence commodity market prices, which are naturally volatile. Following the conflict between Russia and Ukraine, wheat prices hit $350, up from an average of $203 per ton in 2021.

Wheat prices have climbed by 14.5 per cent in the previous five days alone. This spike in food costs will probably spill over to West Africa, where food prices are already relatively high. Many nations in the area already have limited budgetary space and a debt problem, and they lack the financial wherewithal to absorb the blow.

For most West African nations, the expenses of regulating rising prices are already too high. Senegal, for example, has allocated $77 million in subsidies to mitigate the consequences of rising prices. Price hikes in major food items in 2008 triggered hunger riots in various regions, including Nigeria, Mali, Senegal, Cameroon, and Burkina Faso. Many fear a repeat of these scenes if things do not improve.

The changes in the oil and gas sector

Western African countries, particularly Nigeria, Senegal, and Angola, have a considerable untapped resource for liquefied natural gas. A range of gas pipeline projects connecting Europe and Africa have remained under study in the past few years, and feasibility studies for the world’s longest offshore pipeline, delivering natural gas from Nigeria to Morocco and Europe, are underway.

The conflict in Ukraine provides a perfect chance for oil-producing West African nations to step up their role in the global gas markets. Russia produces around 40% of Europe’s natural gas. Although earlier envisaged, the Russian assault on Ukraine has expedited the EU’s attempts to lessen reliance on Russian supplies.

The European Commission intends to reduce EU reliance on Russian natural gas by two-thirds by the end of the year to diversify supply and accelerate the deployment of renewable energy. Therefore, hydrocarbon demand from Europe is likely to rise. This growth may assist West African exporting countries, particularly Nigeria. However, the growing price of oil on global markets, caused by the European crisis, will directly influence the cost of transportation and hence the price of essential commodities.

The West African economic crisis and the Russia-Ukraine scenario highlight the perilous linkages between diplomatic sanctions, commerce, and food security. These problems are still unfolding, pointing to a worsened situation in future.

The current position provides a dilemma for ECOWAS, which should avoid adopting measures that might exacerbate regional food security, which the COVID-19 situation has already compounded.

Intra-ECOWAS trade in agricultural and food products must be aided rather than hampered. Governments must avoid imposing punitive tariffs or export bans. For the rest of the world, a decrease in the cross-border transaction costs, which is already lesser on foodstuffs, as well as redistributive measures to assist poor homes, must be considered.