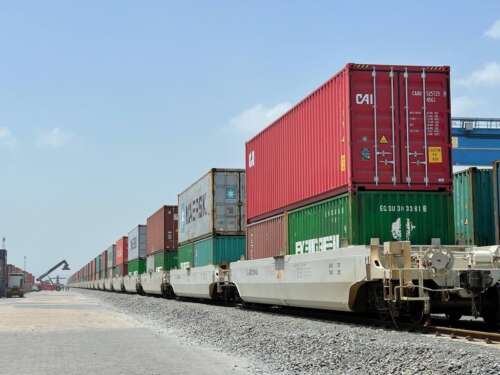 EAC economies were resilient against the pandemic, with exports holding up well and the regional trade balance improving due to lower imports a recent report has revealed.

The report by TradeMark East Africa (TMEA), in partnership with the UN Economic Commission for Africa (UNECA) and African Economic Research Consortium (AERC), dubbed “Waving or Drowning? The Impact of the COVID-19 Pandemic on East African Trade notes that although intra-regional trade initially suffered serious disruptions, it quickly recovered, as Partner States ensured the movement of essential goods and adopted measures to minimize disruption on the main transport corridors while still observing COVID-19 health protocols.

“Several indicators from diverse studies seem to indicate that African economies may suffer significant economic contractions due to the pandemic. However, the full impact on livelihoods is yet to be ascertained as the uncertainty surrounding the behaviour and the intensity of the pandemic is still unfolding,” said Prof Ndungu.

According to a Joint Cross-border Market and Trade Monitoring Initiative by Famine Early Warning Systems Network (FEWS NET), UN World Food Programme (WFP) and the Food and Agriculture Organization of the UN (FAO), maize grain was the main commodity traded in the region between October and December 2020 (Q4’2020) followed by dry beans.

“Regional cross border trade for most commodities increased between the third and fourth quarters of 2020 and driven by trade adaptations to operating under COVID-19 movement restrictions, increased demand in South Sudan due to relative calm, and increased import demand in Kenya in anticipation of increased import requirements later in 2021,” read the trade study in part.

It also noted that livestock exports to the Middle East declined in 2020 due to reduced demand linked to COVID-19. Livestock trade declined more than usual along all trading corridors following the end of the September high season, when trade often persists following the conclusion of Hajj religious festivities in the Middle East.

“Staple food commodity parity price trends (expressed in US dollars per MT) followed seasonal trends during the fourth quarter of 2020. Prices remained high in Ethiopia, Sudan and South Sudan relative to historical levels because of insecurity and high inflation. Price trends are expected to vary across the region in the next nine months, trending seasonably.” The report notes.

TMEA CEO Frank Matsaert says that data from this research informs the region of the important role trade facilitation plays in the region’s economy.

“We need to ramp up trade facilitation efforts to spur innovation, and we urge the government to incentivize priority goods so as to protect lives,” Mr. Matsaert says.

According to the Director of UNECA in Eastern Africa, Dr. Mama Keita, given the potential of trade to promote economic growth and sustainable development, it is extremely important to take a close look at the impact of the COVID-19 pandemic on trade in East Africa.

“The Waving or Drowning report sends out important messages, notably the urgent need to diversify countries’ economies and export base if they are to be more resilient to external shocks and register strong and sustained growth rates in the future,” Dr. Keita says.

EABC has also been instrumental in pushing for eradication of challenges facing trade within the region.  EABC CEO Dr. Mathuki, therefore has called upon the government of the EAC Partner States to prioritize vaccination for truck drivers, implement a regional coordinated approach in fighting the pandemic and harmonize testing charges to reduce cargo transit times.

Nonetheless, despite showing resilience the pandemic has reversed some of the gains made in trade facilitation.  The transport and logistics sector took a hit at the beginning of the crisis, with high levels of congestion at borders and ports. Immediately after the outbreak, the ship dwell time at Mombasa port increased by 48% and berth time increased by 52%. Cargo transit from Mombasa Port to Malaba (the border between Kenya and Uganda) increased from 7 days to 11 days by the Q2’2020.

The time taken to transport goods via the Mombasa-Busia route was nearly three times higher. On the Central Corridor, the transit time from Dar-es-Salaam to various cities in the neighbouring countries almost doubled. The marked increase in transit times highlights the challenges at border points.

Another major casualty from the crisis has been informal cross-border trade, which has struggled to recover from the regional restrictions on cross-border travel even after the opening of borders.  For example, the report’s analysis of Uganda data suggests that even the reopening of Uganda’s borders in September 2020 did not revive informal cross–border trade. The resultant impacts include loss of income in border communities and a reversal of women’s economic empowerment.

The report urges regional governments to continue providing financial and regulatory support to key export sectors and more so to those that have shown resilience since the advent of the pandemic, despite growing fiscal pressures.

It also noted that the pandemic has exposed the vulnerability of certain global value chains. The relative resilience of intra-regional trade attests to the importance of strengthening regional value chains (RVCs), particularly as the region moves into the implementation stage of the African Continental Free Trade Area (AfCFTA).

“The EAC Partner States need to double-down on policies to diversify their economies. Unlike previous crises, the pandemic was fortunately not accompanied by an across-the-board decline in the relative prices of commodities. However, excessive commodity export dependence still exposes the regional economy to unnecessary risks. The AfCFTA could be instrumental in achieving this goal,” reads the TMEA’s joint study adding that EAC governments and other relevant stakeholders should address the challenges facing informal cross-border traders. The pandemic has had a severe negative impact on communities that are heavily dependent on cross-border informal trade.

The EAC Partner States have also been called upon to support the development and implementation of technological innovations to address the bottlenecks that have arisen during the pandemic along the Northern and Central Corridor.

One case of good practice cited by the report is the Regional Electronic Cargo and Driver Tracking System (RECDTS), which facilitates the issuance of the COVID-19 digital certificates mutually recognised by the Partner States, and thus contributes to reducing delays at border points.

Generally the region has been able to remain resilient in the tough times.  However, it should take lessons from the challenges that faced regional trade during the pandemic to bridge the gaps that were stifling the growth of the sector.

Also Read: Its Kenya’s turn at the helm of EAC trading bloc!