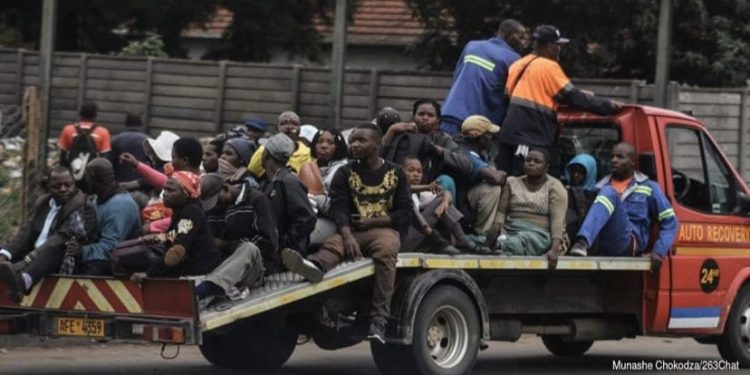 Passengers using unorthodox means to move to and from work

by Albert Nangara
in Zimbabwe
0
Share on FacebookShare on LinkedIn

Commuters in Harare are struggling to find transport to work because of a crippling police crackdown on pirate taxis and private cars carrying passengers.

Some commuters are being forced to endure long hours in the cold weather as winter settles in with brute force mostly waiting for the few Zimbabwe United Passenger Company (ZUPCO) buses available.

Since last week, commuters in Harare have had to endure long queues at ZUPCO bus ranks from as early as 4 am and from 1 pm until well after 9 pm, including on weekends, as the few buses available failed to ferry the thousands of commuters to and from the Central Business District on time.

The situation worsened from Monday when many people needed to travel to various pick-up points ahead of school opening, while others needed to accompany their children to their schools.

On Monday, some bus drivers said the high demand for transport could have been occasioned by the fact that it was a public holiday and most transporters had given their staffers an off day hoping it would not be too busy. After schools opened on Tuesday, the demand for transport has spiked and commuters are battling to get in and out of the city.

The Zimbabwean government introduced a transportation system that has the Zupco taking lead in ferrying passengers across the nation. For now, the major part of the ZUPCO fleet remains the private bus and commuter omnibus operators under the franchise agreement.

However, the busses on the ground are not enough and this has led to the rise of the ‘Mushika-Shika’ system (private cars illegally ferrying passengers to and from work). Operators who are not under the franchise have of late been taking advantage of the shortage of buses to offer transport to commuters at higher fares than those charged by Zupco.

The police at the moment is running a ‘No Mushika-shika operation’ and this has made movement extremely difficult in Zimbabwe. Police mounted roadblocks on all major roads, arresting motorists carrying more than three people in their vehicles. According to New Zimbabwe, commuter omnibuses that are not registered with the ZUPCO franchise are either being impounded or asked to drop passengers.

Speaking after yesterday’s Cabinet meeting, Information, Publicity and Broadcasting Services Minister Monica Mutsvangwa said the Government had not banned the operations of private contractors in the public transportation sector.

“While noting the apparent withdrawal of services by some operators, Cabinet wishes to state that no effort is being spared in ensuring that the inconvenience to the travelling public is minimized.

“Government has, however, noted with concern the proliferation of unlicensed vehicles (mushika-shika) and unroadworthy vehicles commuting various routes,” she said.

“The public is informed that the Government, through the Zimbabwe Republic Police, will enforce the law without fear or favour for the safety of the travelling public. All vehicles without number plates will be impounded.

“The security of the travelling public is very critical and that is what Cabinet is looking at. We cannot leave the public at the mercy of unroadworthy vehicles. We do not want any of our people to be endangered.”

The situation is not affecting Harare only New Zimbabwe interviewed commuters in Bulawayo who had this to say,

“This morning, I waited for almost two hours looking for transport to go to town. There were very few Zupco buses to ferry people to work. The mushika-shikas which we normally board were not on the road because police were arresting them. We appeal to the government to let these private taxis ferry people because Zupco is failing to cope with the pressure,” said Timothy Ncube, a commuter from Cowdray Park in Bulawayo.

Justin Ncube, another motorist, who was coming from Nkulumane with his family, said he was also forced to drop his two cousins at a roadblock along Plumtree Road.

“I was carrying five of my relatives going to a funeral when the police accused me of pirating and asked me to drop two passengers. When I resisted they threatened to impound my car and take it to Drill Hall until I gave in to their demands,” Ncube said.

Meanwhile, Police are accused of causing an accident that left four dead and eight injured when a Toyota Hiace commuter omnibus burst its left tyre and overturned after passing through a police checkpoint along the Vumba-Mutare Road in Mutare Tuesday morning.

Some eyewitnesses alleged that one of the police officers manning the checkpoint threw a spike in a bid to stop the speeding commuter omnibus which then burst its left tyre before overturning and landing on the precast wall at CMED Depot at around 7 am.

“The ZRP is investigating the circumstances in which a speeding Toyota Hiace kombi went through a police checkpoint along Vumba-Mutare Road. The vehicle had a left tyre burst after the roadblock and it overturned before landing on a precast wall at CMED Mutare Depot this (yesterday) morning at 7 pm.

“As a result, four people died while eight others were injured. The police are now conducting investigations to establish what transpired in this unfortunate incident,” he said.

One witness told The Herald, “I saw a body on the spot, but there were more. The incident happened around 7 am. A female police officer threw a spike under the vehicle resulting in the driver losing control.”

Minister Mutsvangwa said more ZUPCO buses that had been undergoing licensing have since been cleared and were now plying various routes while ZUPCO buses that were travelling on inter-city routes were now required to undertake local trips upon return.

Over the past year, the Government has imported more than 450 buses from China of which more than 340 were given to ZUPCO to boost its fleet.