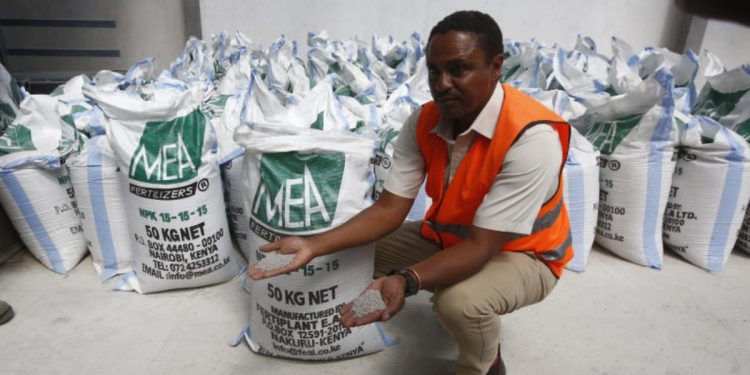 Morocco tops the list of the largest-fertiliser producing countries in Africa. Other countries on the list are Egypt and Algeria.

A study by the African Development Bank Group in 2019 revealed that most African countries depend on imported fertilisers for agricultural production.

The imports are mainly due to the lack of low-cost raw materials for production, low utilisation and high capital requirements for investment in production facilities.

According to the African Fertiliser and Agribusiness Partnership (AFAP), over 40 per cent of African soils face nutrient depletion, partly because of a failure to apply sufficient levels of fertilisers.

Farmers in most countries are increasing their application levels, and hence the average fertiliser application rate in Sub-Saharan Africa is expected to increase to 22 kilograms per hectare by the end of 2022 from 16kg/ha by 2022. Even if achieved, this will be below the recommended level of 100kg/ha.

In Africa, the production of the material is concentrated in the northern parts of the continent. Farmers in the said countries use more fertiliser than their counterparts in the other countries, buoyed by developed factories. Research by Global Market Insights In revealed that the fertiliser market globally was valued at US$ 193.3 billion in 2021. It’s predicted that this will reach US$240 billion by 2030.

The country hopes to increase production by another 8.2 million tonnes by 2026.

As reported by The Conversation, Morocco accounts for 54 per cent of phosphate fertilisers bought in the continent. Before the Russian invasion of Ukraine, it supplied major markets across the world, including India, Brazil and European countries. Alongside Russia, China and Canada, it is regarded as one of the world’s top fertiliser exporters.

Egyptian Minister of Public Enterprises Sector, Hisham Tawfik, said that the country produces over 1.1 million tonnes of ammonia nitrate annually. The KIMA 2 plant, for instance, distributes 55 per cent of its fertilisers to farmers.

The North African country resumed phosphate exports after an 11-year period in May 2022, as demand increases following the Russian invasion of Ukraine. The country aims to export 300,000 tonnes of phosphate by the end of the year and 600,000 tonnes by 2023.

“With the realisation of sufficient stocks for local customers, we are heading to speed up the pace of export, and we plan to reach 300,000 tonnes this year, 600,000 tonnes next year which mean the same level of 2010,” a senior Gasfa official was quoted by Reuters.

Senegal is one of the major phosphate producers in the Economic Community of West African States (ECOWAS) region. It has phosphate rock deposits across the country.

The country’s largest phosphate deposits are located in the Taïba and Thies sites.

READ: Trends shaping the future of logistics in African markets