While there are a variety of approaches for comparing different countries’ wealth, one of the most effective is to examine the individual country’s gross domestic product, also known as GDP.

During a given period, the gross domestic product (GDP) of a country is the conventional metric of value-added via the production of goods and services in that country, as measured by the United Nations. The amount paid on finished goods and services, as well as the amount of income produced from that output, is included in this calculation (fewer imports).

The Gross Domestic Product (GDP) of a country gives an economic snapshot that may be used as a tool for estimating a country’s economic size and growth rate.

Nigeria, with a population of 211 million people, is the most populated African country. It has a mixed economy with a lower-middle-income base that is mostly reliant on petrol and (to a slight degree) agriculture. It is also a developing market, with expanding service, financial, technology industries, and communication among other things.

As a result of growth in the trade industries sector and agricultural sector in the fourth quarter of last year, Nigeria’s economy grew at a quicker rate than predicted by the central bank and the government last year. This was offset by a dramatic decline in oil production.

Nigeria’s gross domestic product increased by 3.4 per cent last year, after decreasing by 1.92 per cent in 2020, according to Statistician-General Simon Harry, speaking to reporters in Abuja, the country’s capital. In comparison, the Finance Ministry expects 2.5 per cent growth and the central bank expects 3.1 per cent growth in 2019. The better-than-expected increase of 3.98 per cent in the three months leading up to December of the previous year, compared with 4 per cent in the third quarter, helped boost the full-year figure. 1.4 per cent was the median forecast of 12 economists who participated in a Bloomberg survey, according to the results of the survey.

According to the most recent Statista report, Egypt ranks the second country with the highest GDP in Africa, with $394 billion, making it the second most prosperous country on the continent. Despite the consequences of the pandemic, Egypt’s GDP increased in 2021.

Egypt has a population of 104 million people, making it the third most populated country in Africa. Additionally, Egypt has a diverse economy that is well-developed in fossil, tourism, and agriculture resources, while simultaneously developing a burgeoning information and communication technology industry.

The acceleration of growth to 9 percent in H1-FY2021/22 (helped by a resurgence in export-oriented industries) Reforms to increase private investment, exports, and foreign direct investment (FDI) will continue to be critical for the economy’s resilience and competitiveness.

Egypt’s GDP grew by 5.3 percent in the year to June, and it is projected to rise to be 5.2 percent in 2022/23 as a result of the current increase in economic activity. However, it is projected that the base effects and demand overshoot will begin to diminish and that economic activity would be negatively impacted by the ramifications of the crisis in Ukraine. As a result, growth is likely to be sluggish in fiscal years 2022/23. 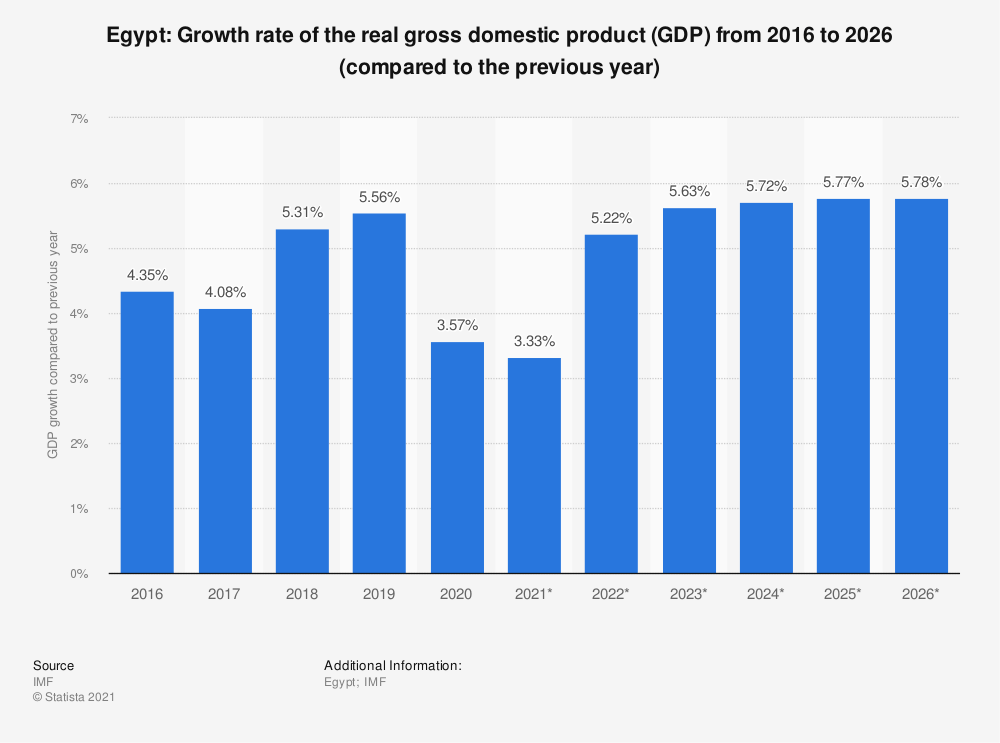 South Africa’s economy is the 3rd largest on the continent, after Nigeria and Egypt. South Africa has a population of approximately 58 million people, making it one of the most populous countries in Africa. According to official World Bank data, it is an upper-middle-income economy that is the most industrialised, technologically advanced, and diversified on the African continent. Its Gross Domestic Product (GDP) was valued at USD 301.92 billion dollars in 2020, making it the most industrialised, technologically advanced, and diversified economy on the continent.

South Africa’s Gross Domestic Product (GDP) accounts for 0.27 percent of the world’s economy. According to the World Bank.

South Africa’s economy is so well-diversified that it relies on a variety of sources for its stability. The mining industry, manufacturing, financial services, and tourism are the primary contributors to the country’s gross domestic product (GDP). South Africa is blessed with an abundance of natural resources, including gold, diamonds, platinum, and iron ore, and it is one of the world’s greatest exporters of these resources, particularly gold and platinum. South Africa is also one of the world’s top importers of these resources.

Algeria is the continent’s largest country in terms of land area. The majority of its economy is based on the oil and gas industry. Algeria has a population of more than 42 million people, making it an upper-middle-income economy. Algeria will have a GDP of USD 145.16 billion dollars in 2020, making it the continent’s fourth-largest economy by that metric. Major contributors are farming (33.3 per cent), manufacturing (40.3 per cent), and services (the remaining 40.7 per cent) (47.4 per cent). Petroleum, natural gas, and petroleum products are Algeria’s primary exports. Most of the country’s revenue comes from hydrocarbons (oil and gas).

Because of a harsher base effect, tighter fiscal policy, and elevated inflation, growth is expected to deteriorate this year. In any case, the government’s new action plan, which intends to enhance the non-hydrocarbon segment, should be coordinated with investment in hydrocarbon extraction to spur economic development. Social tensions, a protracted drought, and the emergence of additional Covid-19 variations are all potential downside hazards. FocusEconomics panellists predict that the economy would increase 2.6 per cent in 2022, which has not changed from last month’s forecast, and 2.1 per cent in 2023, according to the panel’s projection.

Morocco will be the 5th largest economy in Africa in 2020, with overall GDP of US 112.87 billion dollars, according to the World Bank. It has a population of more than 36 million people and is a burgeoning lower-middle-income economy. Its economy is steady and has enjoyed progress in a number of industries over the previous decade, particularly in the service sector. Morocco is the second-richest country in Africa that is not a producer of oil.

Mining and manufacturing are the primary drivers of the country’s economy. In addition to being the world’s third-largest producer of phosphorus, Morocco benefits considerably from its diverse exports, which include vehicle parts, aviation parts electrical equipment,  inorganic chemicals, fish, and citrus fruits among other things.

Morocco’s growth is expected to fall to 1.1 per cent in 2022 as a result of the drought, which has caused agricultural output to decline by 17.3 per cent. Continuing strong but diminishing industrial performance is expected to underpin the economy, while tourism is expected to accelerate its recovery. – Over the medium run, it is projected that ongoing reforms would improve the country’s potential growth.

African countries have enormous economic potential, with lucrative investment and partnership options. Are you looking for the greatest African countries to invest in in order to promote economic progress and earn a profit? The above 5 countries highlighted above have the largest Gross Domestic Product (GDP) according to World Bank data. GDP can help investors make investment decisions because a weak economy frequently indicates lesser earnings and stock values.