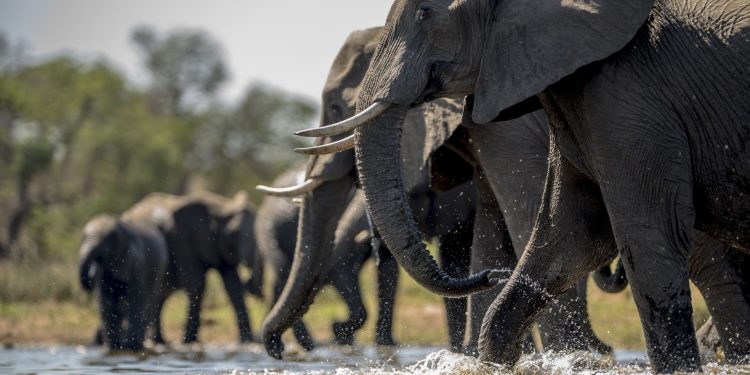 A herd of the African elephant quenches its thirst

It’s a jumbo task as elephant population in Africa soars

On 12th August, the world marked ‘elephant day’, marking key achievements in preserving the lives of the world’s largest land animal which for years has faced the extreme danger of extinction. However, when this day was being marked, unlike in previous years, there was a positive talk of how the elephant population has stabilized.

The majestic animal’s population has shrunk significantly over the past few decades. For example, in Africa, there are only about 415,000 elephants remaining; in 1989, there were 600,000, and in 1979, there were 1.3 million. Poachers in Africa have illegally killed an estimated 110,000 elephants over the past decade — about one-quarter of what Africa’s elephant population was 10 years ago.

However, with global efforts and a dwindling market for elephant tusks, there is a more focus on how to manage the population. In fact, there are regions in Africa that have consistently registered an increase in the number of elephants.

For example, countries in southern Africa have been at the forefront of pushing for an idea to cull their elephant stocks to enable them to reduce pressure on their game reserves. There has been a continued effort to depopulate certain areas of Southern Africa with translocation to more sparse areas.

Diamond producer De Beers has had an operation to move over 200 elephants from its game reserve in South Africa to Mozambique. The elephant population at the private Venetia Limpopo Nature Reserve has been too high and risked causing extensive damage to the ecosystem.

The relocation of the 200 animals is meant to boost elephant numbers in neighboring Mozambique, a country that has faced some of the highest rates of poaching for ivory. At the Niassa National Reserve, poachers have killed nearly 11,000 elephants since 2007, reducing their numbers to about 1,500. This has, however, improved as there has not been a single reported case of poaching in this park for the whole of 2019.

Over the last 30 years, the elephant population has flourished. Conservationists estimate that the elephant population in Kenya has more than doubled from 16,000 elephants in 1989 to 34,800 elephants in 2019. The number of births is also at a record high, with Amboseli Trust For Elephants, a non-profit conservation entity documenting 170 calves born just within the Amboseli National Park in 2020. In 2018, there were a total of 130 calves including a set of twins.

The number of poached elephants in Kenya has dropped from 80 in 2018 to 34 in 2019 and seven in 2020. Then there natural deaths too that captured the world. Last year February, Tim, one of Africa’s last big Tusker elephants died of natural causes. The giant bull who roamed the wilderness of Amboseli National Park in Kenya belonged to a group of elephants whose genes produce enormous tusks. He died aged 50.

“Our hearts are broken because Tim was one of Africa’s very few super tuskers, and an incredible elephant whose presence awed and inspired many,” Wildlife Direct, a Nairobi-based conservation campaign group said after the death.

The body was quickly moved to Nairobi National Museum for embalmment and will be used for education purposes.

In neighboring Tanzania in 2019, Tanzania’s Wildlife Research Institute (TAWIRI) and Wildlife Conservation Society (WCS) released the results of a massive wildlife survey showing that elephant numbers have stabilized in a key landscape known for rampant poaching just a few years ago.

An estimated 20,145 elephants were recorded during the 20-day survey, which consisted of 380 aerial transects over 20 days. The survey covered 29,855 square miles (77,326 square kilometers) of the Katavi-Rukwa and Ruaha-Rungwa landscape and included parks, game reserves, and other protected and conservation areas. The often neglected Lukwati-Piti Game Reserve area in the center of the survey area is of key importance, especially as a seasonal wildlife refuge.

Zimbabwe is also facing a tough balancing act with over 85,000 elephants while the country’s national parks and conservation areas can only cope with 55,000. There have been reported cases of the country selling its excess elephants to the overseas market as it aims to decongest the parks. This has come as the country has witnessed a biting drought that has killed hundreds of wildlife.

Botswana has the largest elephant population in the world, estimated to be around 130,000. This population has been a major concern for the landlocked country as it balances between available grazing land and an increase in human activities. Botswana has been one of the countries pushing for the reopening of trade in elephants as they aim to make revenue from this burgeoning population.

The country has, however, been hit by a mysterious phenomenon with reports indicating that there have been over 350 elephant deaths in 2020. Preliminary tests to explain the reason for hundreds of mysterious elephant deaths in Botswana point to a naturally occurring toxin as a probable cause according to Reuters quoting a government official.

Although trade in species listed in Appendix II can take place through a permit system, in the case of African elephants, the trade quota is kept at zero, essentially banning any trade. CITES had banned the international commercial ivory trade in 1989.

Monitoring illegal trade in elephant products and illegal killing of elephants was first mandated at the 10th meeting of the Conference of the Parties (CoP10,) in 1997, Harare, Zimbabwe. Although the ivory trade has been outlawed under international treaties since 1989, poaching continues to ravage African elephant populations.

Accurate estimates suggest that there were 12 million elephants in the early 1900s recording a total decline of 97% in a century. Despite the rise in population, conservationists still hope the numbers can rise to at least half of the population that existed a century ago.

Banks in Africa hasten use of technology for financial inclusion

A new pathway for growth