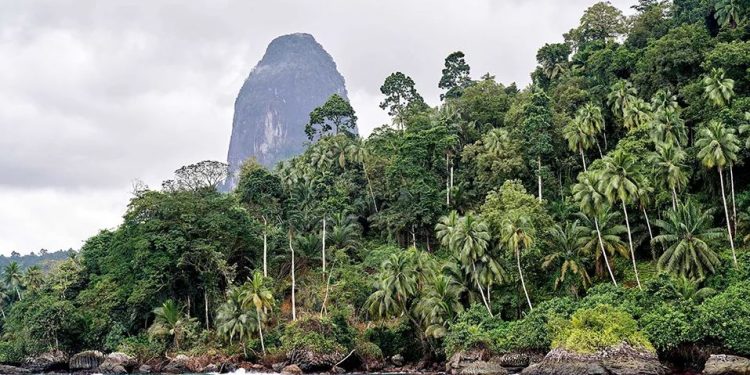 São Tomé and Príncipe a jewel hiding in plain sight

The island nation has the potential to be a haven of international tourism from its natural beauty and agricultural activities.

São Tomé and Príncipe is a country many people have not heard of.

Fewer still would be able to find it on the map (including the author), yet a visit to this picturesque central African country needs to be on every person’s bucket list at least once.

The name of the country admitted does not easily roll off the tongue, pronounced “Saawoh Tomay”, the disingenuously complex conceals a country whose landscape is virtually untouched and beautiful.

The country is and could be a tourism destination to rival the most exotic locations in the world, like Mykonos in Greece, the Maldives, Seychelles, and Mauritius. A Unites States travel website go2africa.com describes an excursion to that country as an “authentic and off-the-beaten-path, a true exploration of jungle trekking and island lifestyle immersion. Floating in the Gulf of Guinea, off the coast of West Africa, is where you will find these hidden African islands. They beckon with the promise of paradise.”

What other countries on the African continent would characterize as disadvantages seem to have lent themselves favourably to this central African country go2africa.com pays further homage to the country by saying, “The islands are thick with emerald-coloured rainforests, surrounded by golden sand beaches and crystal-clear waters that exude a forgotten world feel.”

The country is made up of two islands São Tomé is the larger of the two and Príncipe is the smaller. Príncipe is 35 minutes away from its sister island by aeroplane and is a protected UNESCO-recognized biosphere reserve, virtually undiscovered and undisturbed. Tourism is the most obvious economic activity for this island nation, which should be a hotbed of tourism activities. Currently, visitors to the islands can enjoy canoeing the mangrove rivers, touring the crumbling cocoa plantations, beach picnics and snorkelling.

Visitors to the country can also tour the island’s Obo National Park, home to more than 700 plant species and 143 bird species indigenous to the island. A popular national park feature is the Pico Cao Grande, which towers 370 meters. Other popular features are the coffee and cocoa plantations that harken to a bygone age where agriculture was the mainstay of that country’s economy but are now retrofitted and re-purposed into restaurants and eco-tourism ventures.

Historically São Tomé and Príncipe was discovered and claimed by Portugal, which would explain the overbearing Portuguese influence to this day. The discovery occurred in the 15th century. It is said that the islands’ sugar-based economy gave way to coffee and cocoa in the 19th century all grown with plantation slave labour, a form of which lingered into the 20th century. Politically speaking, although independence was achieved in 1975, democratic reforms were not instituted until the late 1980s.

The first free elections were held in 1991; the political environment has been one of continued instability with frequent changes in leadership and several failed, non-violent coup attempts in 1995, 1998, 2003, and 2009. The recent discovery of oil in the Gulf of Guinea is likely to impact the country’s economy significantly.

Economically the World Bank categorizes São Tomé and Príncipe as a lower middle-income state with what it calls a fragile economy.

This is not a mischaracterization as the country relies heavily on the tourism sector, making it much more susceptible to external and exogenous shocks. This assertion is confirmed by the African Development Bank, which reported in its economic outlook on São Tomé and Príncipe that the country’s economy shrank by an estimated 6.4% in 2020 after growing by 2.2% in 2018 and 1.3% in 2019.

For the first time in a decade, the contraction in output is attributed to a sharp decline in tourism and service sectors, which were severely hurt by weak external and domestic demand and COVID–19 containment measures.

Despite this vulnerable economic position, the country has enjoyed and continues to enjoy strong financial support from various multilateral finance and development finance institutions. When the impact of COVID containment measures began to bite the local economy, the monetary authorities took an accommodative stance which included reducing minimum reserve requirements so that banks could lend to distressed sectors.

Inflation increased to about 9% from 7% in 2020 due to shortages of food and essential goods caused by the pandemic. The net effect of these adverse economic developments is that the fiscal deficit of the island nation began to widen to as much as 5% of its GDP in 2020 up from around 2% in 2019. This came from increased government spending against falling tax and other state revenues.

Fortunately for São Tomé and Príncipe, this deficit was financed by external borrowing. The public debt of that country is reported by the African Development Bank to have increased to as much as 104.9% of its GDP in 2020. The country’s current account deficit reduced albeit marginally from reduced tourism and cocoa receipts. Despite these adverse developments and almost miraculously, the country improved its foreign exchange reserves position with months of import cover, which was only possible with the financial support of multilateral institutions.

The AfDB projects the economy of São Tomé and Príncipe to grow by 5.4% in 2022 and this is attributable to increased export demand for cocoa, chocolate, and palm oil. The reduced and gradual doing away of travel restrictions is certain to revive that country’s tourism industry.

These favourable developments should augur well for the country economically and see its foreign exchange reserves position improving. The government, additionally, is implementing macroeconomic and structural policy reforms—such as fiscal consolidation and strengthening the central bank’s independence. It is also committed to continue investment in public infrastructure to improve the business environment. São Tomé and Príncipe will face significant headwinds in its recovery from the pandemic.

The biggest millstone on its neck has to be its public debt, which is unsustainably high at 104.9% of GDP. The AfDB expects this debt to come down to around 96% in 2022.

It is important to note that São Tomé and Príncipe has been a member of the AfDB since 1977 as regional member country. Since 1978 the AfDB has extended no less than 64 loans and grants to the island nation amounting to US$ 340.93 million across various sectors, including agriculture, water, sanitation, and infrastructure. The country is an African Development Fund-eligible country and therefore has access to concessional financing.

This is most impressive, and it is all thanks to the governance of the country. The World Bank describes São Tomé and Príncipe as a model of democratic transition of power in Central Africa and this was reinforced last August when the second round of presidential elections were held. The highly contested elections were won by the candidate supported by the opposition and the other candidates conceded defeat peacefully and committed to work together with the new president.

The next elections in that country are slated for October 2022. The country’s economic prospects are as pleasing as they are promising. However, there are still nagging social problems. Poverty is proving to be a difficult issue to deal with for the government and statistics compiled by the World bank suggest that at lease 33% of the population lives on less than US$1.90 a day and the remaining 67% of the population is poor.

Read: Rwanda pen a quintet of bilateral alliances with São Tomé and Príncipe

Commonwealth: An enabler or hindrance to Africa's economic growth?