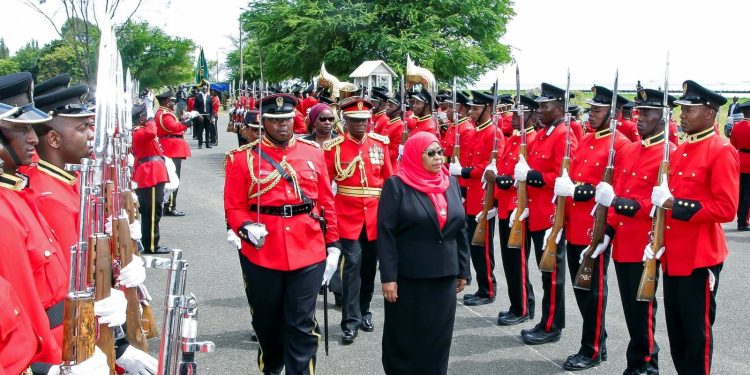 If the recent visit by the African Development Bank Group (AFDB) President Dr. Akinwumi A. Adesina is anything to go by, President Samia is positioning Tanzania to achieve its socio-economic development vision.

Ahead of her State tour to France and Belgium where she among other things attended the One Ocean Summit on global action against pollution of marine life, President Samia hosted the President of the African Development Bank Group, the lead African funding instrument.

The visit by AFDB President Dr. Akinwumi A. Adesina was very symbolic and it among other things signified the good relations that Tanzania has built with the bank. Needless to say, such a positive relation translates to qualifying for national development funding.

President Adesina’s visit is viewed as a springboard that will serve to strengthen the already solid relationship between Tanzania and the Bank Group, local media commented about the visit.

Dr. Adesina was in Tanzania for a three-day official visit that pundits say, ‘signals strong ongoing support by the pan-African lender for transformative infrastructure in the country.’

While, in the country, the Bank Group chief met with President Samia along with several senior government officials. Along with discussions on progress of funded projects, the Bank Group leader and his host also laid a foundation stone for a new infrastructure development project, the 112.3 km Dodoma City Outer Ring Road that is by large been co-financed by the Bank.

The Bank’s Board approved funding for the Dodoma City Outer Ring Road project back in 2019 and the stone laying ceremony symbolized commitment by both parties to meet the terms that were inked 3 years prior.

Valued at $214.69 million, the project is of great importance to the development of Tanzania’s capitol city of Dodoma. As mentioned, the Bank Group Board of Directors passed the financing of $137.3 million which is 64% of the project budget.

The Bank’s funding opened the door for work to start on the highly anticipated road with the government of Tanzania contributing $34.5 million of the total budget.

As, mentioned, President Samia is rebuilding investor confidence and reconstructing relation bridges with development partners. To prove her efforts are paying off, additional funding for this project, some $41.8 million is coming from the Africa Growing Together Fund that is financed by the People’s Bank of China.

In his comments while in the country, the Bank President commended President Samia’s efforts and achievements thus far.

“Tanzania is making good strides in infrastructure development as it continues to construct roads linking to highways like this one in Dodoma and others in other parts of the country,” he said.

Tanzania is notably a founding member of the African Development Bank and to date enjoys one of the largest Bank portfolios. As of January this year, Tanzania’s active portfolio at the Bank boasted an impressive $2.5 billion for some 23 operations.

Put together, agriculture, finance, and multisector investment make up 13% of the portfolio while sovereign operations hover at $2.32 billion.

Other Road Infrastructure Works Funded By AFDB In Tanzania

After the 2019 approval for the 112.3 km Dodoma City Outer Ring Road, the Board of Directors of the African Development Fund in 2021 also approved a $116 million loan to upgrade a 160-km Mnivata-Newala-Masasi road corridor in the southern part of the country.

Through this loan, the Bank is covering 98.71% of the project cost while the government of Tanzania is covering 1.29% of the budget.

“The project will upgrade the roadway, including the 84-meter Mwiti Bridge to bituminous standard,” the Bank reported.

Thanks to the project, the Bank will also be funding improved provision of potable water, education and medical infrastructure across the region. The project also has components to fund the establishment of cashew nut processing units as well as a capacity building component for entrepreneurial training for women and youth.

Further still, through this project, the Bank will help to increase development of rural areas through which the road traverses, that is otherwise known as the Mtwara Development Corridor.

The road links the growing Mtwara Port and Mbamba Bay port on Lake Nyasa and as such, will serve to increase trade with neighbouring cities and countries.

It is expected that over the course of the five-year project, it will improve mobility and accessibility for over 1.1 million people on the Tanzanian side as well as facilitate integration with neighbouring countries of Mozambique, Malawi and Zambia.

The project is in sync with the Bank Group’s Country Strategy Paper (2021-2025) which emphasizes sustainable infrastructure for a competitive economy and an improved private sector business environment for job creation, as well as two High-5 strategic priorities: Integrate Africa and Improve the quality of life for the people of Africa.

Further still, as for Tanzania the Bank funding goes in inline with the country’s current five-year Development Plan (2021-2026). This signifies the interconnection of objectives and goals of the bank and the receiving country which in this case is Tanzania.

In his comments, the Bank Director General for East Africa Nnenna Nwabufo said; “The periodic isolation of such a significant population worsens vulnerability and undermines social inclusion. Improved road connectivity would therefore build the resilience of the people and widen livelihood opportunities within the Mtwara Development Corridor and the surrounding districts.”