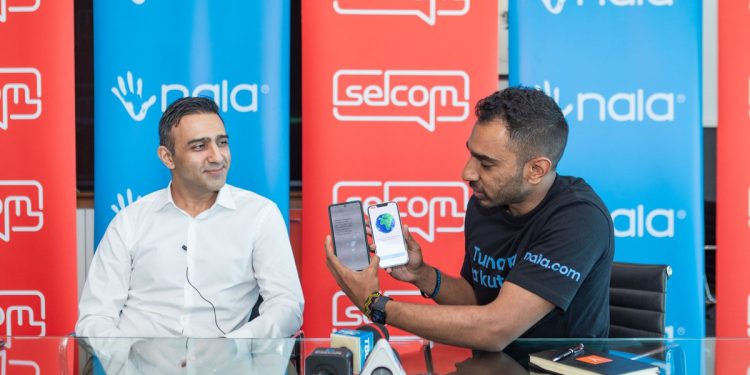 Nala CEO Benjamin Fernandez demonstrating the flow of remittance-cash from abroad to Tanzania the Nala mobile application: The Exchange

Nala and Selcom partnership will transform the remittance to Tanzania which grew from US$400 million in 2020 to US$570 in 2021.

Remittances to Tanzania just got a shot in the arm as two companies, Nala and Selcom, set the stage for seamless and cost-effective inbound remittance flow to Tanzanians’ mobile wallets.

The partnership inked at Selcom’s premises in Dar es Salaam comes after an increasing inflow of cash to Tanzania from the United Kingdom and the United States diaspora.

According to Tanzania’s Ministry of Foreign Affairs and East African Cooperation, the value of diaspora remittance went up by 42 per cent, equivalent to around US$570 million, up from US$400 in 2020.

The two tech-driven companies have stepped up to bridge the gap between thousands of Diasporas across the globe holding various currencies and their Tanzanian counterparts, as Selcom’s Executive Director Sameer Hirj stresses.

“Selcom looks forward to working with Nala and the government to grow inflows for onward investment in various sectors”, he added.

Nala is a cross-border payments company based in Tanzania. Selcom is a Pan African financial and payment services provider, offering a comprehensive range of payment, issuing and acquiring services.

Nala, whose services can be accessed via a customized, easy-to-use mobile application, has seeded its services in seven countries, including the US, UK, Kenya, Uganda, Rwanda, Ghana and Tanzania.

During the press conference, a live demonstration of a money transfer from the UK to a Tanzanian mobile wallet was conducted and became a success in less than a minute.

“As we expand our service and reach, it’s vital to secure second-to-one partners to achieve this ambition.” He commented.

As a young player in the industry, Nala’s CEO finds Selcom a viable partner to stimulate higher outputs and growth in the market.

“Selcom’s position as a top player in financial infrastructure places it at the centre of financial innovation and creates the recipe for the fruitful partnership”, he added.

Despite varying years of operability in the country, with Selcom marking more than ten years and Nala behind that, these locally-designed companies’ solutions stand to transform the entire landscape of fintech, particularly international cash exchange.

Nala argues that at least 80 per cent of the money sent to Africa is done with physical cash, while the rest of 20 per cent is done via digital channels and exposed to multiple stages of fees and paperwork. In the same vein, Fernandez pointed out his aspiration to see the number downplayed as Tanzania can achieve more.

“We have a diaspora population living in the US, UK and many countries worldwide and neighbouring nations in East Africa. The value recorded only ranks as the accounted sent cash. This leaves the money carried on planes, handed to relatives in cash to carry back home, and these scenarios aren’t included in the metrics,” he added.

Nala positions itself as a fintech startup on a mission to increase economic opportunity on the African continent and its diaspora worldwide.

According to Fernandez, Nala has about 26,000 customers in the UK, which hosts around 3 million Africans.

However, on a broader scale, enabling environment and healthy technology systems are contributing factors to the growth of fintech, which ultimately drives remittance flow.

Throughout history, remittances have depicted a clear message that they are critical financial instruments.

The government of Tanzania is working on building better working systems to pull Diasporas to invest in their homeland.

Hence, over the past years, remittance to Tanzania steadily increased. Still, on a broader scale, Tanzania is lagging behind its competitive-counterpart Kenya (US$3.7 billion) trailing behind the region’s top performer Nigeria (US$17.6 billion), according to Africa Business Insider.

Nala’s offer to the entire landscape is the ease of money flow and cost-effective charges compared to other platforms, whereby costs of sending money home are higher.

“Building enabling environment from regulations, bank and telecom partnerships will facilitate healthy ecosystems of fintech built in Tanzania”, Fernandez commented as he champions locally-driven fintech solutions that are community-powered.

Nala is planning to scale in more African countries and improving remittance to Tanzania is just a start.

READ: Remittance to Kenya increases and drops in Uganda

A dive into Tanzania’s gigantic oil and gas ambition