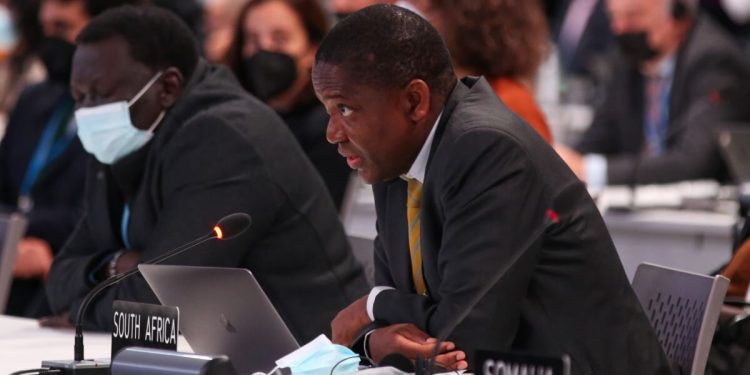 South Africa is expected to announce an investment plan of US$ 8 billion clean energy transition plan at COP27. [Photo/e3g.org]

Transition plan to serve as pilot for other developing nations

Just weeks from the November scheduled COP 27 in Egypt, South Africa has officially announced plans to wean itself off its coal-dependency industries in under five years.

The energy transition deal was announced at the end of September and has been entered into with the US and a score of European nations including the UK, Germany, France and the European Union. This climate-finance agreement is meant to see South Africa invest in renewable energy and end its traditional reliance on coal for South Africa and it is to do so in just under five years.

South Africa, Africa’s second-largest economy after Nigeria, admits that 77% of its greenhouse (GH) gas emissions are from energy production most of which (70%) is for the production of electricity through the burning of coal. This huge reliance on coal has seen South Africa rank 13th-largest emitter of GH gasses in the World.

“The crisis that we are facing requires that we should take bold, courageous and decisive action to close the electricity gap,” conceded South Africa’s President Cyril Ramaphosa back in July this year.

South Africans are only happy to oblige given the fact that not only has burning coal been damaging the atmosphere but it has not been producing sufficient energy to meet the country’s power demand. As a result, South Africans have been contending with scheduled power outages.

In fact, the national power monopoly Eskom is neck deep in a debt that is valued at over U.S.$400 billion, needless to say, switching to renewable energy is not only a wise move but the only reasonable move.

As such, South Africa has now rolled out the Renewable Energy Independent Power Producer Procurement Programme (REIPPPP) on the backdrop of the just signed JET deal. The move is expected to bridge the country’s energy needs and to do so through renewable energy sources.

Also Read: Shift from the dollar with Pan-African Payment System

As President Cyril Ramaphosa put it in his televised national address, “…the JET framework underscores that combating climate change is both an environmental imperative and an economic one. This framework is an evidence-based document and a victory for evidence-based policymaking. The publication of this framework must now serve as a call to action to each of us to embrace the opportunities presented by a low-carbon, inclusive, climate resilient economy and society.”

Head of the JETP Project Management Office, Rudi Dicks seconds the president and maintains that decarbonisation is the primary aim of the JETP. The Head of the project said the JETP partnership funds will be allocated on the basis of an investment plan for sustainable growth, however, the much-anticipated plan is yet to be finalized, but all in good time as Dicks reassured stakeholders.

“The unveiling of the investment plan will be made at the next COP conference, after which it will have to be improved by ministers and approved by Cabinet and signed off by the president,” he said.

Other countries around the World are looking to adopt the JETP model to wean off their fossil fuel dependency. Indonesia and Senegal have already made their intentions clear. However, for the latter, JETP will need to be customized to meet the socioeconomic development needs of the country.

“A JETP must also be an opportunity to develop the economy and new businesses for our people. Without this, the energy transition won’t be a success,” insist sector experts in the West African country.

Overall, the JETP is envisioned to facilitate the adoption of renewable energy and be a stepping stone and catalyst for economic growth.

The goal of JETP is to help South Africa decarbonise and switch to renewable energy for its power needs as aligned with the country’s Nationally Determined Contribution emissions goals.

Through the program, South Africa will mobilise an initial commitment of $8.5 billion for the first phase of financing, which has now been secured and whose distribution plan will be announced next month in Egypt at the COP27.

“The Partnership is expected to prevent up to 1-1.5 gigatonnes of emissions over the next 20 years and support South Africa to move away from coal and to accelerate its transition to a low emission, climate-resilient economy,”  reports the European Commission.

“South Africa welcomes the commitment made in the Political Declaration to supporting the implementation of our revised Nationally Determined Contribution, which represents our country’s ambitious effort to support the global battle against climate change,” said South Africa’s President Cyril Ramaphosa.

In his comments at that time, former United Kingdom Prime Minister Boris Johnson said; “This game-changing partnership will set a precedent for how countries can work together to accelerate the transition to clean, green energy and technology.”

Similarly, US President Joe Biden said the JETP “…will help transform South Africa’s economy to a clean energy economy more quickly. By closing South African coal plants ahead of schedule and investing in clean power alternatives for the people of South Africa and supporting an equitable and inclusive transition in South Africa’s coal sector, we are following through on the pledge the G7 partners made in Cornwall to accelerate the transition away from coal in developing countries.”

So now, South Africa is at the forefront of switching to renewable energy, an ambition that has been evasive for many African countries which are every other day discovering more and more fossil fuel deposits.

Many African nations are at a crossroads on whether to continue with oil explorations or switch to green energy options. The main question here is matter of economic ambitions of each country. Many see oil as a quick way to boost their economies but this is coming at a time when the globe is moving to reduce CO2 emissions not increase them.

As such, JETP sets a good example for Africa and other developing nations around the World to adopt, a clean energy transition solution that also creates economic development opportunities for the host countries.