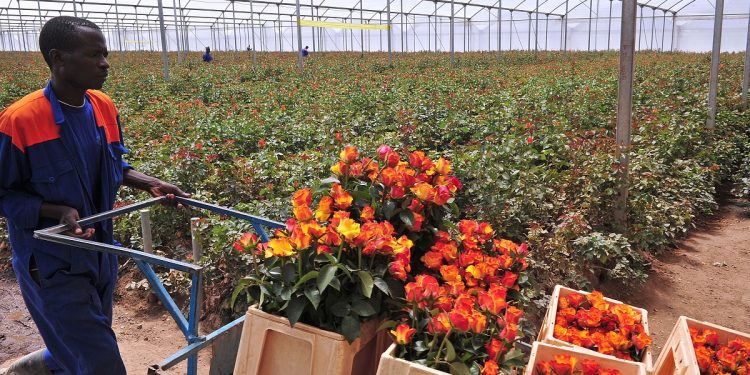 The flower industry is among the most affected in Kenya. The IMF says that the coronavirus pandemic will cause a recession in 2020 that could be worse than the one in 2008-2009. [Photo/File]

Already, airlines have started manifesting the effects of the coronavirus outbreak

We are in a recession!

This is the stark reality that the world is facing and it has come sooner than many have predicted thanks to the covid-19 coronavirus. Already, the world is reeling from shock at the sheer magnitude of effect the virus has had on every aspect of life.

In addition to the lives and man-hours lost, the world will take a long time to recover from the hit. The global economy has suffered massive losses since the WHO announced the threat of the disease which was made public globally on December 31, 2019.

Already, airlines have started manifesting the effects of the coronavirus outbreak with Kenya Airways (KQ) staff taking a pay cut starting with newly appointed CEO Allan Kilavuka who will see his salary whittled down by 80 per cent from the 35 per cent he had announced earlier.

Tala’s next mission after freezing operations in Tanzania

In what is proving to be a hard place to be for the airline, cancellations to some of its premier routes have come back to back showing that any hope of turning around the performance will be a tough one even after the dark cloud has passed.

As it is, the covid-19 outbreak has brought a mixed bag of unwelcome goodies to Africa whose airlines have been struggling for decades. The disease threatens to exacerbate an already bad situation which The International Air Transport Association (IATA) projected in mid-February where African carriers risked losing about US$ 400m from suspended China operations alone.

Including other markets, Africa could lose a lot more stymying growth in a sector that could help open up the continent’s country territorial borders. With new measures announced by the different countries in Africa, the movement of people and goods on the continent has become more difficult.

Countries which rely on each other for business are now interacting at arm’s length to ensure none catches the deadly virus. This new normal is a threat not only healthwise but economically affecting the most vulnerable in society. With the limitations to doing business, it means that economies will recede and with this, bring more challenges to their populations.

And, Kenya’s flower garden, Nakuru County will also see a significant drop in revenues as countries close their borders.

Governor Lee Kinyanjui said in a statement on March 20, 2020, that the ongoing lockdown in most countries especially in Europe has negatively affected demand for cut flowers and vegetables.

“We are experiencing serious challenges in the distribution of the flowers and vegetables in the target markets. This has adversely affected our economy,” he said.

Governor Kinyanjui added that many flower export companies in Nakuru face possible layoffs for their staff due to the prevailing problems.

“It is estimated that a decline of 10 per cent in demand will result in layoffs of over 25,000 workers,” the governor added but asked that the government create a rescue package for the critical sector.

On March 21, 2020, Britain’s High Commissioner to Kenya Jane Marriott tweeted, “To those in the UK – we are huge consumers of Kenya’s beautiful flowers. 70% of UK roses are from Kenya. 85% of Kenya’s flowers are rotting, unsold. Please buy a bunch if you can: cheers you up. Supports a vital industry (most are British businesses).”

This disruption will have great repercussions not only in the region but also in the emerging markets which imported significantly large tea volumes from Kenya. They include Somalia and Nigeria, Bangladesh, Ireland, Iran, India, Poland, Netherlands, Turkey, Indonesia, Jordan and Japan.

The African continent has the largest number of poor people in the world with estimations showing that over 400 million people million fall in this category.

Before the covid-19 outbreak, the IMF had projected that six out of the world’s 10 fastest growing economies in 2020 would be in Africa. However, the coronavirus surge is putting the brakes to this much-needed growth slowing down markets which would have been key to growing the continent’s GDP.

Anecdotal reports show that economies like South Africa, Nigeria, and Angola are already suffering from commodity price drops while in Kenya retailers are depleting Chinese made stocks and they cannot find cheaper alternatives.

However, there is hope in that the virus spread may not hit some countries as much as many others on the continent. For instance, the economies of Nigeria, Kenya, South Africa and Ghana are relatively diverse because unlike the others which are major consumers, these countries import from other countries as much as they do from China which gives them an edge. With this diversity, Kenya, South Africa, Ghana and Nigeria have alternative sources of income and jobs.

So far African countries have lost an estimated US$29 billion to the coronavirus economic disruption.

The United Nations Economic Commission for Africa (ECA) predicts that the coronavirus will shrink Africa’s US$2.1 trillion GDP by 1.4 per cent. In all likelihood, ECA also notes that the annual economic growth for the continent will drop to 1.8 per cent in March from the 3.2 per cent in February.

And, it could get worse in the coming months.

While not much can be done, the hope is that the virus will disappear as fast as it appeared for the world to get back in rhythm.

Globally, the IMF says that the coronavirus pandemic will cause a recession in 2020 that could be worse than the one in 2008-2009. However, the world’s economic output should recover in 2021.

“The economic impact is and will be severe, but the faster the virus stops, the quicker and stronger the recovery will be,” said IMF Managing Director Kristalina Georgieva.

Speaking during a conference call with central bankers and finance ministers from the world’s largest 20 economies, Georgieva said that the global growth outlook was negative.