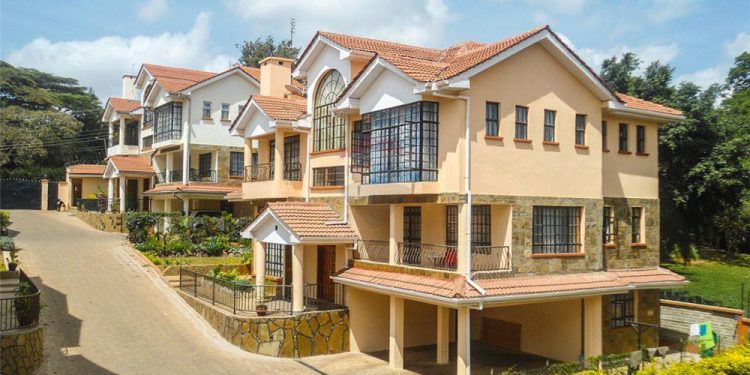 5 bedroom townhouse to let in lavington[photo/Re/Max]

The average price of a house in the city rose 10.5% in the year to June, compared to a 1.7% drop the previous year.

Investors owning property in and its environs have seen the highest property price surge in 11 years based on revived demand from buyers who had slowed down their buying during the most challenging period of the Covid-19 economy.

Data from realtor HassConsult show the price of an average house within the city grew 10.5 per cent in the year to June compared to a reduction of 1.7 per cent in the same time a year earlier.

The rise in the price of construction materials like cement, steel, and paint has increased the amount of upward pressure on housing prices.

Standalone residences in Langata, Spring Valley, and Westlands saw the sharpest price gains during the period that saw Ongata Rongai and Ngong have the most significant growth among satellite towns outside of the capital.

The reason for the growth in house prices in Langata is that the area is still relatively affordable compared to other metropolitan suburbs, where houses are offered at a premium.

“This price increase comes at a time of worldwide inflationary pressures on supply inputs, as well as a revived vigour in the property market following a few years of market stability and global market stagnation,” said Sakina Hassanali, HassConsult’s head of development consulting and research.

The price of a bag of cement weighing 50 kilogrammes may now be purchased for between Sh850 and Sh900, which is an increase over the previous year’s retail price of Sh650. The home developer typically passes such fees to the final homeowners.

One of the worst-hit industries by the pandemic’s economic effects was real estate when orders from potential homebuyers dried up. This was mostly because of income and job losses, cautious bank lending, and investors choosing to keep their money in hand as they weathered the financial storm.

In the ten years leading up to 2015, this industry was one of Kenya’s most rapidly expanding, and its returns surpassed those of both stocks and government securities.

Kitisuru and Nyari are within the diplomatic blue zone as Muthaiga and Runda reported price rises of 7.3 per cent and 5.1 per cent, respectively, to a total of 92.5 million and 111.2 million Shillings.

Gigiri remained the most expensive neighbourhood despite a 1.6 per cent increase in average housing prices, which brought the total to Sh112.7 million.

The increase in property prices coincided with Kenya’s economy rebounding last year, with growth reaching its best rate in 11 years due to the relaxation of Covid-19 restrictions.

According to the World Bank’s projections, the economy’s expansion is expected to drop to 5.5 per cent this year from 7.5 per cent in 2021. The World Bank attributes the slowdown to the knock-on effects of the war in Ukraine.
In a recent economic update on Kenya, the bank predicted that the country’s gross domestic product (GDP) will increase by an annual average of 5.2 per cent in 2023-24.

As a result of the Covid-19 pandemic, vital industries in Kenya, such as tourism, were damaged in the year 2020, which resulted in the country’s gross domestic product (GDP) falling by 0.3% for the first time in almost three decades.

After years of falling behind equities and fixed income in terms of the rewards they offered to investors, real estate has once again returned to the top end of returns offered by asset classes in the country, thanks to a price appreciation of 10.5% and an appreciation of 2.4% in rental yields over the same period.

Investors in government securities, which account for the vast majority of fixed income assets in the country, have been offered interest rates ranging from 7.2% to 14% across the spectrum of tenors, even though the All Share Index on the Nairobi Securities Exchange (NSE) has decreased by 16% so far this year.

“The net result of the rising rents and property values is an increase in overall property returns of 16.26% annually. These returns outperform other asset groups and provide safer inflation hedges,” added Ms Hassanali.

House buyers now feel confident enough to invest in real estate, and developers can now finish projects they had placed on hold because of the possibility of a resurgence in the rental market.

Therefore, detached homes have remained the most common option for buyers, recording the most significant price increase over that time at 16.8%, surpassing semi-detached homes’ values, which increased by 1.6%. Asking rents for apartments decreased by 0.9%.

Ongata Rongai, one of Nairobi’s satellite towns, saw the most significant price increase, at 13%, for freestanding apartments. Improved infrastructure connections with the metropolis and amenities like hospitals and schools have increased demand in satellite towns by enabling more people to relocate further from the city.