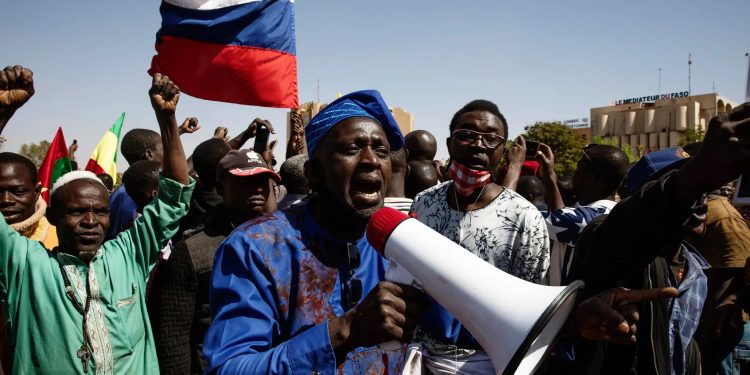 Africans flying a Russian flag in Ouagadougou, Burkina Faso, in January. The US is forcing Africa to support it for its Russia attacks but the continent remains uncommitted. [Photo/New York Times]

The blatant abuse of, and racism against Africans in Ukraine has revealed another side of the Russia-Ukraine crisis.

For starters, Russia has not been abusive to Africa on the scale that the United States or its allies have been.

And so, many Africans have a fond spot for Vladimir Putin.

The most memorable event that has pitted Africans against the West is the killing of Col. Muammar Gaddafi by the United States and France in the forefront supported by their other NATO allies. This has left a bitter taste in the mouths of many Africans and so the Russia-Ukraine crisis is for the Americans and their allies to deal with.

Many commentaries on the crisis show that Africa is not ready to be dragged into this situation, unless their leaders choose to do so, which is highly unlikely. Across the continent, there is an arising that has not been experienced before uniting Africans from all corners of Africa. The covid-19 pandemic and the economic regression thereof have shifted priorities on the continent and the US’s warmongering is not one of these.

Abuse of, and racism against Africans in Ukraine

Again, the blatant abuse of, and racism against Africans in Ukraine is another knocker that will not see Africans get swayed easily since they feel they are still being treated like lesser humans.

For America and its allies to gain Africa’s support on any agenda they have, they have to do a lot more to convince Africans than they have had to prior to the covid-19 menace and the Russia-Ukraine crisis.

It is evident that the US, Europe and their allies do not care much for Africa. During the pandemic, the US, Europe and their allies hoarded vaccines and denied the continent the opportunity for equal and timely administration. This, however, was a blessing in disguise in that the vaccines have largely proven not to be effective. A win for Africa!

Since Russia’s operation started in Ukraine, a powerful alliance of friends has worked together to isolate the largest Slavic nation which also happens to be the largest European nation economically. The allies are imposing sanctions to shut off Russia’s access to the world’s financial markets.

While the campaign’s success is debatable, it no doubt has had an effect on Russia’s economy. But, Russia could find an unlikely ally in Africa which could offer a financial lifeline to Kremlin.

Pundits say that a successful economic war on Russia means that the Kremlin has to rely increasingly on African resources to evade sanctions and keep the Russian war machine running.

An opinion by George Clooney, John Prendergast and Justyna Gudzowska shows that Russia has been working with corrupt regimes in Africa in preparation for this so-called economic fallout.

Clooney and Prendergast are The Sentry’s co-founders while Gudzowska is the Director of Illicit Finance Policy at the outfit. The so-called experts on Africa- believe that Russia is more evil than the US and its allies.

They say that to fully realize the gravity of their perceived threat on Russia, it is necessary to understand how Moscow has prepared for just such a scenario.

The Wagner Group, a secretive mercenary army, has been used by Vladimir Putin and his allies over the past few years to project Russian dominance in corrupt but resource-rich African countries. Despite the fact that the United States, the European Union, and the United Kingdom have all given their blessing to this deadly group, its membership and methods remain a closely guarded secret. In exchange for access to vital natural resources, Russia has used Wagner operatives to protect African despots.

What they do not say is that the United States, the European Union, and the United Kingdom are the biggest beneficiaries of chaos and disorder in Africa. They have been at it for almost two centuries.

In an opinion piece published in the TIMES, they say that the Wagner Group originally debuted in Ukraine in 2014, financed by Yevgeny Prigozhin, a politician known as “Putin’s Chef” for his work as the head of a catering company that was popular with the Kremlin.

According to some estimates, “Putin’s shadow army” has up to 5,000 soldiers, and the group has been used to fight on Russia’s side, but in a way that allows Moscow to keep its involvement secret. It is interesting to note that Clooney and his co-authors refer to the Russians as ‘mercenaries’ but the Americans are ‘special forces’. What is so special about plundering, raping and torturing people? Is it that the Americans have to get away with these horrors but not others? What balderdash!

Clooney and his ilk continue: As a result, the group has deployed to various hotspots across the world (e.g. Mali and Syria), including Libya and Sudan (where Wagner mercenaries fought a bloody battle with US Special Forces in 2018).

They add that Russia would have been left without a corrupt partner in Sudan if Omar al-Bashir were to collapse in 2019, but the Wagner Group found an ally in Mohammed Hamdan Dagalo (Hemedti), Sudan’s second in command and leader of the homicidal militia the Rapid Support Forces, formerly known as the Janjaweed.

Hemedti had amassed a sizable personal wealth through his involvement in a gold-exporting shadow economy. As well as helping Russia gain access to gold mines, he was a close ally of President Putin.

The opinion notes that Russian foreign minister Sergey Lavrov met with Hemedti as the Russia-Ukraine crisis began. Hemedti is said to have travelled to Moscow to examine measures to strengthen Sudan-Russian commercial cooperation. Lavrov made time for him. A Red Sea naval facility would allow Russia to deploy its maritime might into an important transportation corridor.

According to the opinion piece, the Wagner Group has committed atrocities such as murder, rape, and torture in the Central African Republic where the group has an outsized role and a Wagner agent acts as the president’s security advisor. Guess who is the source of the intel…?

The Sentry and CNN.

This is the same CNN that has come under fire for misreporting, contorting facts and even staging events to make Africa suit their narrative for their audiences.

The trio add that to further consolidate its hold on the country’s gold and diamond mines, Wagner has begun the process of amending the mining code. This comes just months after France was kicked out of Mali. France has enslaved its former colonies for decades, especially with the requirement for the CFA Franc created in 1945 and which is still in circulation in six Central African countries and in eight West African countries. The CFA’s founding principles have not been altered.

The opinion by Clooney and his team adds that Russia has attempted to fortify itself against the kinds of sanctions that the United States and its allies would impose in the future by utilising the Wagner Group to penetrate these resource-rich countries and acquire lucrative mining concessions.

Here is the kicker.

As a result of its use of the private military proxy, Russia has established itself in unstable and corrupt countries, forging opportunistic relationships with powerbrokers in the government or security services, providing training to state security forces and non-state armed groups alike, conducting missions marked by atrocities, and maintaining strong links to the Kremlin.

To be sure, the recent actions taken by the United States and its allies to cut off Russia’s economic ties to the rest of the world are essential. Even if Putin is taken aback by the fast and global response to the invasion in the form of sanctions, Russia’s Africa policy implies that the Kremlin has been quietly preparing for such a scenario.

To ensure that these sanctions are successful, it is critical that Russia be denied long-term access to resources in Africa. For international pariahs, gold and diamonds are desirable assets because they can be traded and exchanged without going via the regulated banking sector, and both Iran and Venezuela have employed this strategy in the past. Efforts must be made to prevent Russia from obtaining further gold, diamonds and other natural resources.

However, how does one go about doing so?

Forcing African leaders to choose between Russia and the West may be one of the goals. If Washington and its allies want to avoid a repeat of the Cold War, they should focus on fighting the development of kleptocracy across the continent. As if this has been in Africa’s best interests!

While Africa may seem far removed from the ongoing conflict in Ukraine, others may mistakenly believe that the United States does not consider Africa to be a strategic priority. Nevertheless, there can be no denying that Putin and his associates support kleptocracy. They thrive on the corruption that comes from their position of power. It’s all about the graft, and when they’re able to distribute it, they develop new areas of power.

The authorities of countries like Sudan, the Central African Republic (CAR), and Mali welcome Russian mercenaries on the pretext of maintaining law and order, but in reality, they employ the hired killers to keep their own positions of power in place. Trades valuable national resources for money from Russia in exchange.

Corruption is a national security issue that President Joe Biden recognised last year. We must redouble our efforts in the battle against kleptocracy by putting more financial pressure on corrupt regimes, reviving diplomatic relations, and enlisting the support of the corporate sector, especially as Russia becomes increasingly isolated and turns to Africa for allies and resources.

African countries should not have to choose between the West and Russia when it comes to foreign aid. As opposed to cycles of corruption and atrocities that only benefit authoritarian governments and their supporters, the focus should be on good governance, development, democracy, and responsible investment.